On the 24th of August I had the chance to present and demo OpenFaaS to the Cloud Native Computing Foundation's Serverless workgroup. This was a great time to reflect on what had been achieved since the first commit, show OpenFaaS in action and to talk about what was coming next.

OpenFaaS is an open-source framework for building Serverless functions on Docker or Kubernetes. You can read my introduction to OpenFaaS here.

We also have some great SWAG on the way and have started to explore the OpenFaaS brand. Read on for a quick summary, the video recording and some ideas on how you can get involved.

What's in a name?

Once we found consensus in the community around the name OpenFaaS I went ahead and checked GitHub, Twitter and domain availability. Not everything we wanted was available.

So we started to ask around and then had some blog posts get up to #1 on Hacker News along with trending as the most popular Golang project on GitHub for several days and the most popular project overall for around a day.

No long after a few people came forward and kindly offered up what we were looking for.

Thanks to Mark Peek from VMWare who also transferred openfaas.io and openfaas.org over to me.

The CNCF landscape identifies key and important projects in the cloud native space. There's an open issue to have OpenFaaS placed in the event-based compute space.

The project's name started out as FaaS, so we're looking at where it makes sense to use the new branding of OpenFaaS in this issue.

You can order a set of 10 sample stickers for $8 / £5 including shipping from StickerMule. Here's a proof of what one of them will look like: 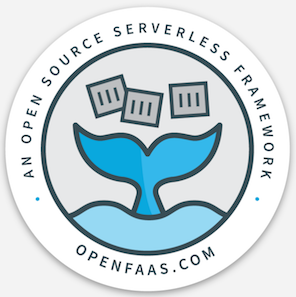 Thanks to Packet Host for funding the logo and website designs

You can download the media pack including the new logo right here:

If you would like to get a sticker in person you can catch me at the following events:

This is the demo and introduction I gave to the CNCF Serverless workgroup - it's an action packaged 10 minutes covering everything the project has achieved so far, some practical demos and then what we see as coming next.

You can also grab the slides on SlideShare.net.

What are people saying?

The best part of contributing to @open_faas is the great team, #opensource and how well it just works across @kubernetesio and @Docker Swarm

I wrote my first FaaS today and it couldn't have been easier or more fun. Thanks @alexellisuk! #FaaS #Docker

Very pleased with how straightforward it is to write a function for @alexellisuk's FaaS platform - https://t.co/r4dUX4Fyzv #golang pic.twitter.com/UPOvv2IMRZ

I've recently started to play with FaaS and it's pretty sweet. You should check it out. Super simple. Super fun. https://t.co/xd5FOIGepk

Update: AfterBurn is now deprecated and Java is supported in the official OpenFaaS templates. Java comes to the official…