Feel free to read the original blog post below.

OpenFaaS is a framework for building serverless functions with the power of Docker or Kubernetes. It's cloud native and has Prometheus metrics built-in.

Pictured: Grafana dashboard hooked-up to OpenFaaS during my Dockercon demonstration

Since the initial versions of OpenFaaS we've been able to make anything a serverless function by use of our Function Watchdog. Even pre-cloud utilities like ImageMagick and ffmpeg that have served the Linux community for over 20 years. We do this by forking one process per request in a similar way to how CGI works. This blog post shows how AfterBurn functions can accelerate the throughput of functions with slower initialisation times or burn-in like Java on the JVM.

New to OpenFaaS? Watch the presentation to the CNCF Serverless Workgroup here.

First a diagram of how the OpenFaaS Classic Watchdog works: 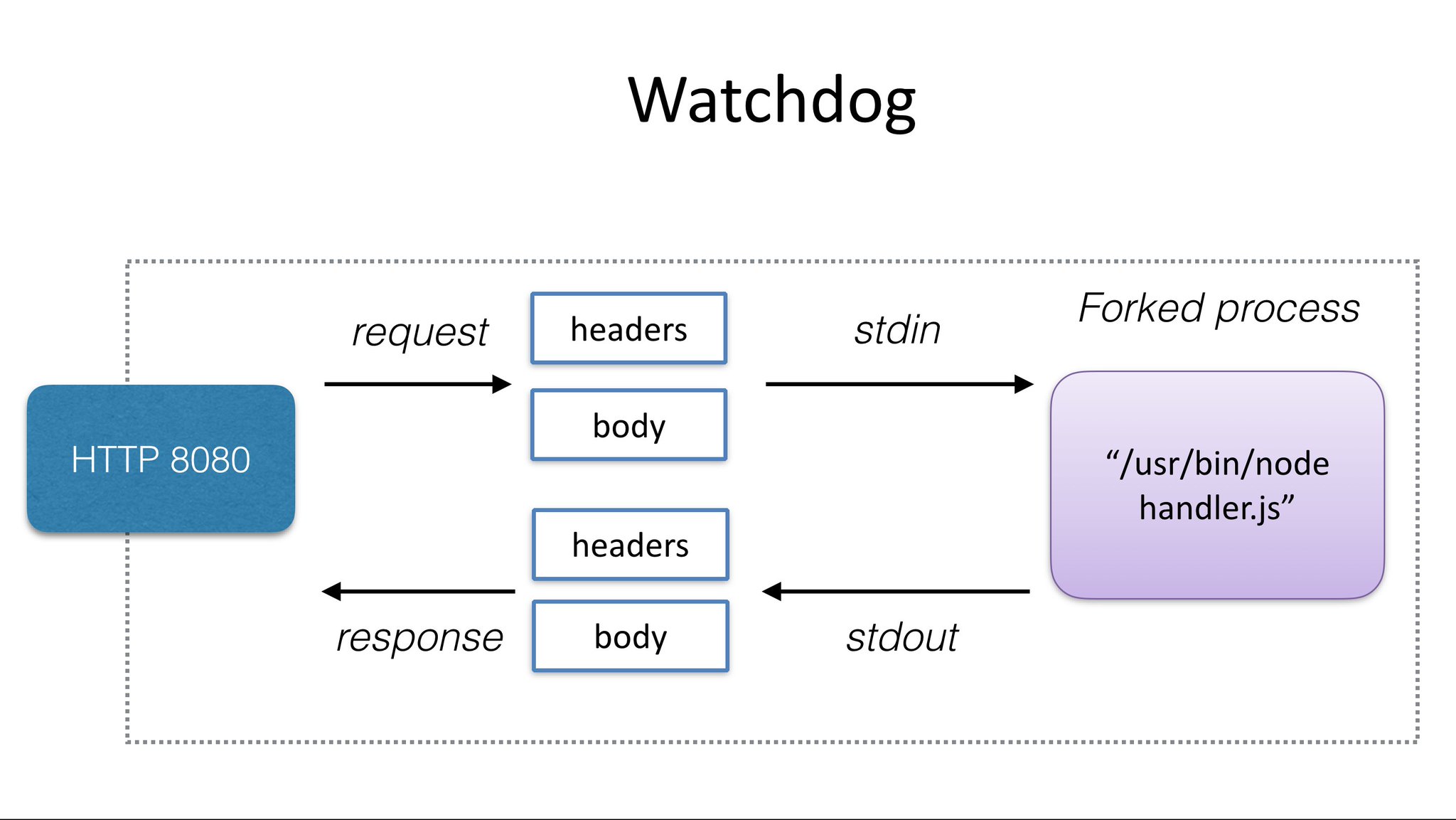 The Function Watchdog which is written in Golang is embedded in your container and becomes the entry point or first process. The watchdog then listens for incoming requests and marshals the header and body into the function via STDIN and STDOUT.

Here's ImageMagick in action resizing an image to 50%:

Need to do image processing? Checkout this Serverless ImageMagick function from the @open_faas CLI - https://t.co/zv5DCtM98O 👌 pic.twitter.com/szZXRzAg3z

How quick is this?

Well if you are running in an language with a low start-up time like Python, Golang or .Net Core then we're talking 10-30ms.

Let's be clear - OpenFaaS runs any binary or programming language on a Windows or Linux back-end.

I used the FaaS sample functions to benchmark the total execution time to fork and execute a new process in various programming languages. I also included a third-party result from a recent blog. 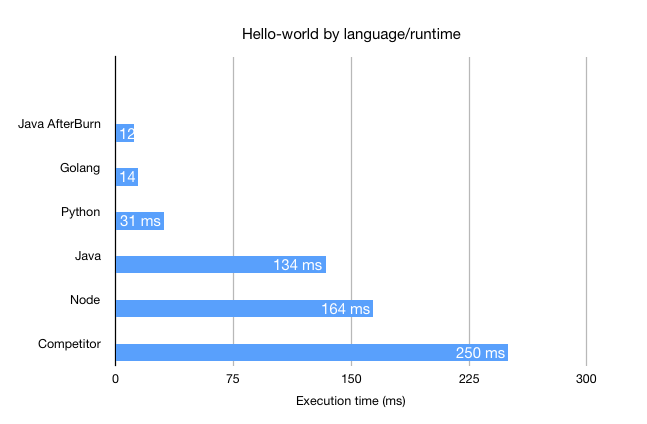 I've included a result for the Java AfterBurn function - here it comes in the quickest at 12ms. It's around a 10x improvement. But what does that mean?

Well if you are running intermittent or slow functions then you may not benefit from the optimization, but if you are expecting very high throughput then it looks a bit like this: 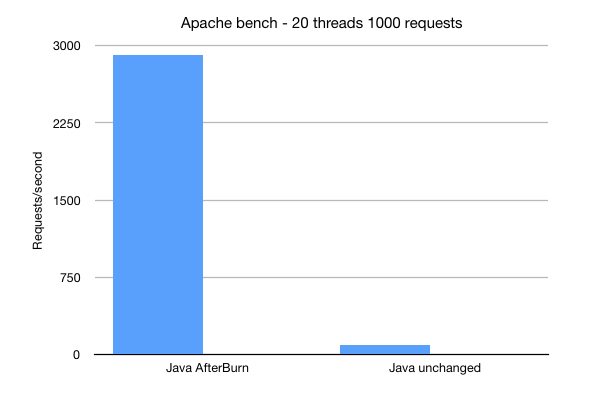 No - that isn't wrong, we're seeing nearly 3000 requests per second vs around 91 from forking a Java JVM per request.

The results from apache-bench are single-threaded and I also turned auto-scaling off. This throughput would be even higher across a multi-node low-latency cluster.

When you begin to load a machine learning model into memory we start to take a small hit for each request. We could optimize it or just run it on the built-in queue provided by NATS Streaminig.

The Function Watchdog is going to start offering a second mode called: AfterBurn. AfterBurn is where we fork your process once then keep it around for subsequent requests meaning that you can make your functions run faster. This technique is not new and Wikipedia places it around the 1990s.

FastCGI did not take off and was replaced by HTTP, their site has even been taken down meaning the Internet Archives is the only way to find out about it. For historical reasons Golang appears to have a library for it.

So AfterBurn takes the best of FastCGI (reusing a forked process) and the best of HTTP (an easily-parsed well-known text format) and combines them to produce substantial speed boosts for slow functions or JVM-based languages like Java.

How do I try this?

Get started with OpenFaaS

You can get started with OpenFaaS with our introductory blog post, writing your first Python function or heading over to the repo to Star the project and show your support.

If you'd like a brief conceptual overview and demo then you can watch the recording of the presentation to the CNCF Serverless Workgroup here.

As a Computer Science student at the University of London I was taught not to optimize unless it was really necessary.

Michael A. Jackson in his book "Principles of Program Design", Academic Press, 1975 says:

We follow two rules in the matter of optimization:

Rule 2 (for experts only). Don't do it yet - that is, not until you have a perfectly clear and unoptimized solution.

Therefore once you've run benchmarks on your functions, have tried running in asynchronous mode and with faster hardware or bare metal you decide to use AfterBurn.

AfterBurn involves writing a small HTTP parser for your target programming language. We've started with Java, Python (for machine learning), Node.js and CSharp. If you'd like to start using AfterBurn get in touch with us on Slack or GitHub and we'll help you get up and running.

Along with the HTTP format JSON streaming is also popular as well as GRPC. For most languages a HTTP parser is already built into a standard library or you can write one easily.

Join us on Slack and GitHub

Start Watching the OpenFaaS project on GitHub for all the latest updates, releases, issues and pull requests.

The best way to get involved or ask questions is to join us on Slack. Just email: alex@openfaas.com.