Adam Herzog (@ah3rz) of Docker's community marketing team reached out to me about Docker Hacks 2016 - a challenge where you submit a cool hack showing something awesome with Docker. Here's what the blog says about the contest:

The winner(s) of the DockerCon Cool Hack Challenge will receive a free ticket to DockerCon 2016, flight to Seattle and hotel accommodations. Up to two teams will be accepted, maximum 2 members per team.

You can read more on the blog. If you're working on something cool then send it in!

Ever since I started using Docker on my Raspberry PIs and writing tutorials around it I wanted to find a way to bridge the worlds together. I wanted to raise the profile of Raspberry PI within the Docker world and Docker within the tech community of the Raspberry PI. Here is why I think they meld well together:

My hack builds a network cluster from four Raspberry PI Zeros costing just 5USD each and three 8-Segment LED boards. It brings together the IoT functionality of the Raspberry PI and the power and ease of Docker's native clustering capabilities. One PI Zero is designated as a manager and the other three are workers which light up when a web request is passed onto them. 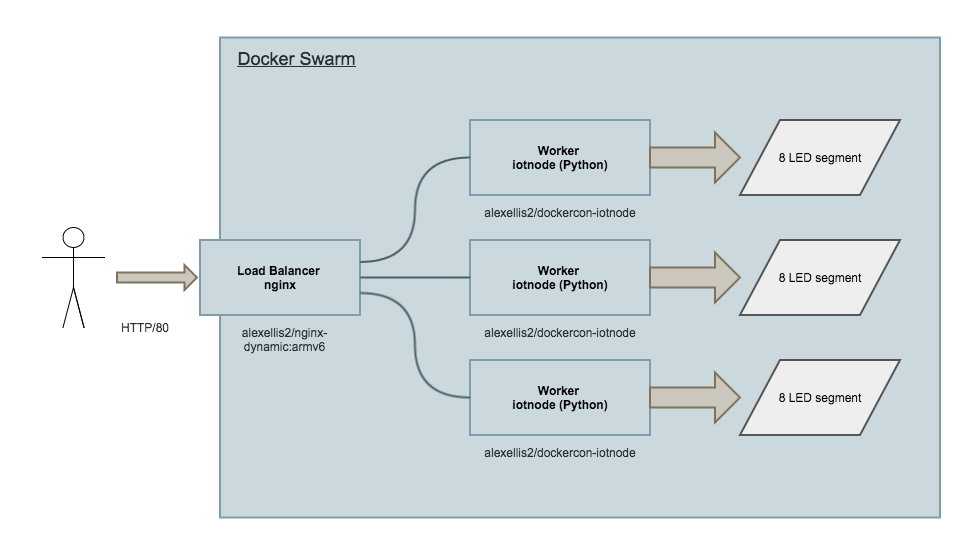 Putting it all together

Earlier in the year I wrote a magazine tutorial for Linux User & Developer showing that Raspberry PIs could scale a web application across multiple devices using Docker Swarm. So I was already half-way towards achieving my hack.

Next I had to prove that Docker could access the GPIO pins of the PI, this was simply a case of building out an image with the relevant Python libraries and system permissions.

Once I had turned an LED on and off a few times I moved on to add-on boards such as the Pimoroni scroll-phat. I raised a Pull Request to have my Dockerfile merged so that anyone can use the board through Docker in the future. Version 0.1 with the scroll-phat showing the CPU count of the Swarm

I eventually settled on the Ciseco Pi-Liter for its low price of £3.00 and compact form. I didn't want any cables to be trailing off the PI's headers. This kit would have to travel well.

We have 4x Raspberry PI Zeros. The first PI is designated as the Swarm Manager and the other boards are Swarm Agents. Each Agent has its own Pi-Liter LED board connected to the 40-pin GPIO header.

This this point curl or apache-bench is used to make a number of requests to the Nginx load balancer on the Manager. Nginx will distribute the requests across the PI Zeros. Each PI Zero lights up waits 0.1 seconds then turns the LEDs off again using a simple Python script.

In the video I give a quick explanation of the setup then use curl and Apache Bench ab to simulate a real-world load on the cluster.

Please star or fork the Github repository for the project:

Do you want to start building your own Docker IoT cluster? Then head over to my Docker ARM portal on Github:

What people are saying

My video was re-tweeted by Solomon Hykes: the creator of the Docker Project and I got this, too. I will be getting a framed copy! 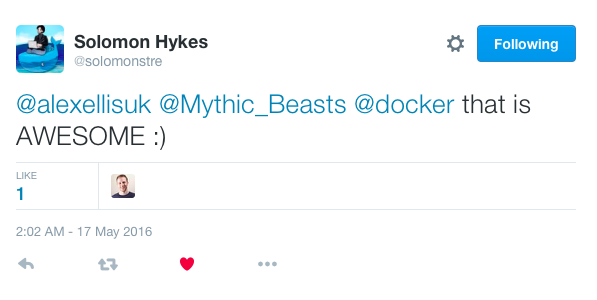 What would you build with Docker and the Raspberry PI? What sensors, lights or add-on boards make sense to you in a cluster? Let me know in the comments or on Twitter @alexellisuk.

And please wish me luck with my Dockercon hack :)

In this write-up we'll look at a Node.js prototype for finding stock of the Raspberry PI Zero from…