In this write-up we'll look at a Node.js prototype for finding stock of the Raspberry PI Zero from three major outlets in the UK.
I wrote the code and deployed it to an Ubuntu VM in Azure within a single evening of hacking. Docker and the docker-compose tool made the deployment and update process extremely quick.

Explicit linking through --link is just about manageable with a couple of containers, but can get out of hand as we add more tiers or containers to the application.

The docker-compose tool is part of the standard Docker Toolbox and can also be downloaded separately. It provides a rich set of features to configure all of an application's parts through a plain-text YAML file.

From Docker 1.10 onwards we can take advantage of network overlays to help us scale out across multiple hosts. Prior to this linking only worked across a single host. The docker-compose scale command can be used to bring on more computing power as the need arises.

View the docker-compose reference on docker.com 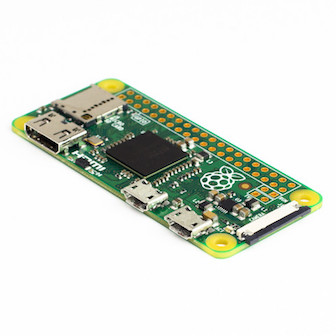 There is a huge buzz around the Raspberry PI Zero - a tiny microcomputer with a 1GHz CPU and 512MB RAM capable of running full Linux, Docker, Node.js, Ruby and many other popular open-source tools. One of the best things about the PI Zero is that costs only 5 USD. That also means that stock gets snapped up really quickly.

If you want to try Docker or Swarm on the PI check out the tutorial below.

Docker Swarm on the PI Zero

I found a webpage which used screen scraping to find whether 4-5 of the most popular outlets had stock.

The retailers didn't seem to mind whereismypizero.com scraping their sites for stock, so I set about writing a similar tool from the ground up. I had the intention of handing a much higher amount of requests per second through caching and de-coupling the scrape from the web tier. Redis was the perfect tool for the job. It allowed me to set an automatically expiring key/value pair (i.e. a simple cache) and also to transmit messages between Node processes through pub/sub.

Fork or star the code on Github:
alexellis/pi_zero_stock

If you've worked with Node.js before then you will know it is single-threaded and that any CPU intensive tasks such as parsing HTML or JSON could lead to a slow-down. One way to mitigate that is to use a second worker process and a Redis messaging channel as connective tissue between this and the web tier.

The docker-compose.yml file from the example.

Once I had this working locally deploying to an Ubuntu 16.04 image in the cloud (Azure) took less than 5 minutes. I logged in, cloned the repository and typed in docker compose up -d. That was all it took - rapid prototyping a whole system doesn't get much better. Anyone (including the owner of whereismypizero.com) can deploy the new solution with just two lines:

Updating the site is easy and just involves a git pull followed by a docker-compose up -d with the --build argument passed along.

If you are still linking your Docker containers manually, try Docker Compose for yourself or my code below:

Fork or star the code on Github:
alexellis/pi_zero_stock

Check out the test site 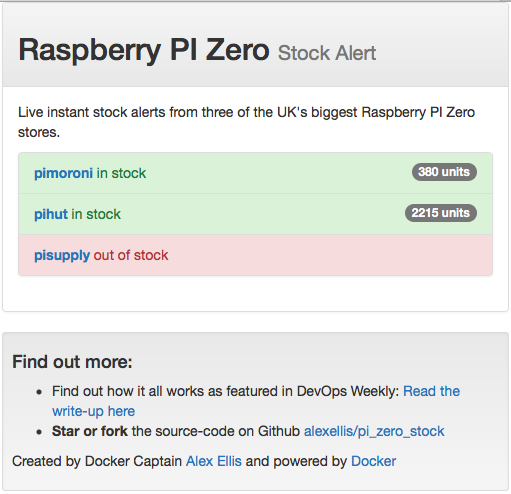 Like many other people in tech, I drink a lot of coffee and spend far more than I should…