runC is a CLI tool produced through the Open Container Project for spawning and running containers without having to run a Docker daemon. It makes use of libcontainer which powers the Docker Engine.

I'm using Arch Linux which has runc available in the package repository and is installed along with Docker 1.11.

We can either prepare a root-filesystem from scratch, extract one from a Linux distribution's rootfs.tgz file or export one from a container already run in Docker.

Let's extract a rootfs from a Docker image by running a container, then using docker export.

Now generate a config file for runc and start the container. You will be given a Node.js REPL.

Finally, pick a name for the new container and run it as root or sudo - launch node and try out a few commands:

Running the example on my machine: 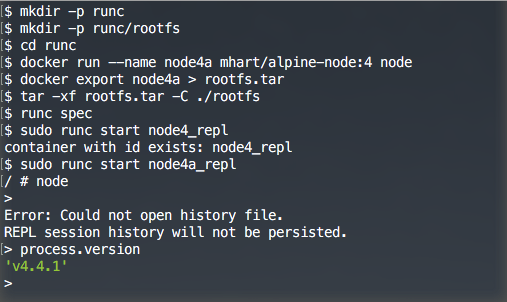 Running the example in bash.

Both runc and Docker make use of libcontainer but have very different CLIs. If you would like to learn more about how to customise runc, add networking and much more then check out the official homepage at: runc.io or the Github repo.

Popular on the blog this week:

On the 16th May 2016 Microsoft released .NET Core RC2 which comes with a brand-new simplified CLI. .NET Core…