Create your very own environmental monitoring dashboard with Docker and the Raspberry Pi.

At Dockercon 2016 I saw InfluxDB working in harmony with Grafana and new I needed to try it as soon as possible.

Grafana's UI is crisp and pleasingly dark - kind of like Sublime Text for dashboarding. InfluxDB is a time-series database ideal for recording measurements.

Pimoroni had kitted me out with half a dozen environmental monitoring add-on boards for Dockercon so I set about writing a simple dashboard for collecting data in my house. I started with one sensor and added more once I had everything tuned-in.

This is my version pic.twitter.com/YlRjuLMfBk

I've now been collecting data since the beginning of August and can see a definite change in the weather!

In Part 1 we'll use Docker to load up a Grafana and InfluxDB instance.

Then in Part 2 we'll configure each of our Raspberry Pis to push regular sensor readings to InfluxDB through Python.

Before we begin collating sensor data we will need somewhere to store the measurements then another tool to display them.

Grafana is a dashboard tool used to monitor anything that can be measured. It is often paired up with Prometheus as a back-end to display the health of containers and clusters. You can combine various datastores such as InfluxDB, Prometheus or any other JSON based HTTP endpoint as long as it conforms to a time series.

Docker Compose gives us a way to launch our database and dashboard together on our PC. The docker-compose.yml file is also provided in the Github repository: alexellis/enviro-dashboard.

You should now be able to connect to your Grafana dashboard on port: 3000 or at http://localhost:3000/ if you're on Docker for Mac/Windows.

If you want to use the influx client tool to explore its CLI or data you collect later on then type in:

Let's create an initial database with the CLI:

This step can also be automated through the InfluxDB API or a client library.

We're now going to create an initial dashboard by running-in a json file I created earlier through the Grafana UI. We will use curl in a bash script to create a datasource for InfluxDB and then create the dashboard afterwards. You could also do this manually through the UI.

At the time of writing there doesn't seem to be a better way of automating this initial setup.

You can now login to your dashboard as 'admin/admin' at: http://localhost:3000/ 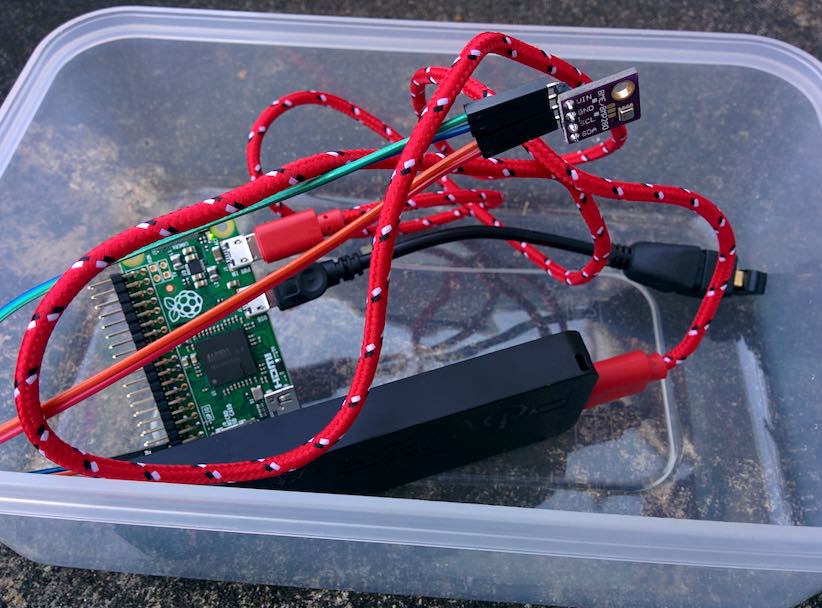 This cheap lunchbox and battery pack let me run the data logger outdoors for around 12 hours, even through a freezing night.

In part 2 I will show you some code that uses the InfluxDB client API in Python to submit measurements at a regular interval. After that we'll create a set of graphs to display the data.

Let's run the Python code inside Docker so that we don't have to install dependencies on the Pi.

Type in raspi-config and go to advanced options, then "Enable i2c" - this enables the Pi to talk to the Envirophat and other sensor boards.

If you haven't already then type in curl -sSL get.docker.com |sh and wait for Docker to install.

Here's an initial Dockerfile for the Envirophat to be found in the logger directory of the repo.

I also have a version available for the BME280 sensor which is very similar but also features a humidity sensor in the bme280_logger directory.

At runtime just pass environmental variables for all the parts you need:

Now build the Docker image and run it to start logging data. To pass environmental variables just type in something like the following with multiple -e arguments.

Log into Grafana as admin/admin on http://localhost:3000 or wherever you are hosting the site. You should already see the dashboard we created earlier when running add_dashboard.sh.

If you have any issues with either of the scripts then you can upload the dashboard.json file manually and create the datasource entry like this: 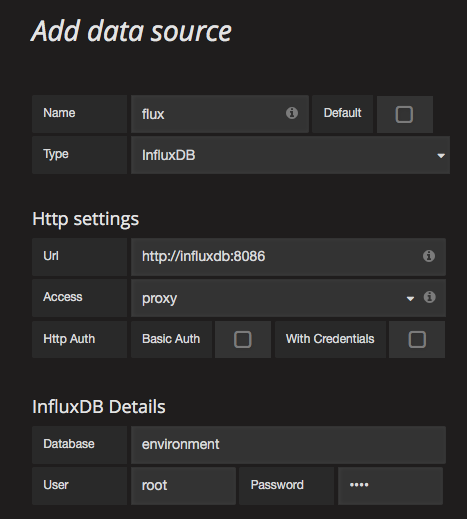 From here you will be able to create new Dashboards and add gas-bars, gauges and other cool visualizations like sparkles using the "singlestat" view.

Never too early for a Christmas IoT