It's the 28th of November but since the Christmas edition of the MagPi magazine is already out it must be OK to start decorating the house for Christmas, especially if a Raspberry Pi and LEDs are involved.

Here is the bill of materials:

Plug the DIN pin from the NeoPixel or strip into Pin 18 and then connect 5v to 5v on the Pi and GND to GND on the Pi.

Thanks to @pimoroni for the expert advice. My Alexa-controlled @Raspberry_Pi Christmas is only drawing 0.5A and it's super bright #led pic.twitter.com/bTlMAxSarz

An engineer (and even Adafruit) would recommend that you use a logic level converter so that the Pi outputs a 5v and not a 3.3v control signal. They would also recommend using a separate 5v DC power supply. This means adding a breadboard and lots of extra wiring.

I checked with the folks at Pimoroni about how their UnicornHAT works and it turns out that as long as the current draw is safely below 1A things will probably be OK. I connected my multi-meter in series with the NeoPixels and measured 0.85A at 100% brightness. Pimoroni's Jon said this means things will probably be OK with my 60 LED NeoPixel strip.

You should probably measure the output of your tree with a multi-meter before attempting this build and please don't leave your lights unattended.

How does it work?

I've programmed my custom Alexa Skill to recognise three seasonal phrases and then send a message over MQTT to the Pi. These are defined in speechAssets - part of the Alexa Skill SDK. 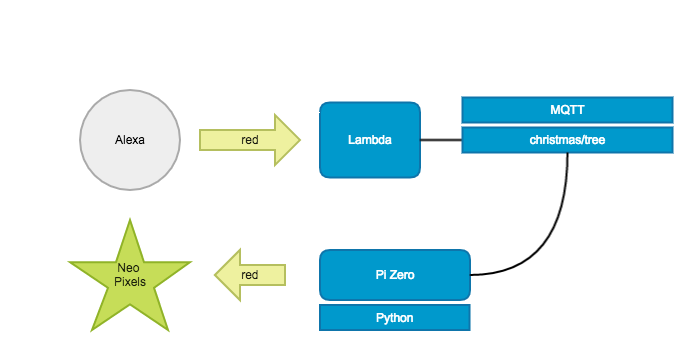 Each phrase is parsed as an "utterance" and then simple Node.js code runs on Amazon Lambda's serverless system and sends a message to a specific MQTT channel. My Raspberry Pi is constantly monitoring that channel for instructions and as soon as something comes in - it will act on it.

MQTT means that there doesn't have to be a direct link to the Pi from the Alexa service. It's a common protocol for IoT and can even support two-way communication such as in my Envirophat video.

The code on my Raspberry Pi runs in a Docker container which I've also pushed up to the Docker hub. To try that portion of the code out you only have to install Docker and run my image. Here's my Dockerfile and the Python code that receives messages and drives NeoPixels.

For more on Docker, check out my Hands-on video introduction to Docker below for the Raspberry Pi.

Can I try it out?

Yes! You can still create an LED Christmas tree even if you don't have an Echo/Dot, it's optional but a great addition.

My wife said: when I walk down in the morning I say "Alexa ask the christmas tree to change to red" and then ask her to turn them off when I leave the house for work!

Follow the instructions on Github or fork/star the repo for a rainy day. If you're not used to working with the Alexa SDK here are a few links into the code.

The MagPi have written a blog post about my build over at raspberrypi.org - thanks very much!

Check out my video introduction on Docker which takes you from a blank SD card to running an Internet of Things doorbell.

If I were writing this post again, in 2020, I would probably have hosted the function on faasd on the Raspberry Pi itself. Then to expose it to webhooks from the Alexa service, I would have exposed the endpoint using inlets which is similar to Ngrok, but self-hosted and has no artifical rate-limits.

Create your very own environmental monitoring dashboard with Docker and the Raspberry Pi. At Dockercon 2016 I saw InfluxDB…

Boost your site's performance and save money with NGinx

NGinx is an extensible open-source HTTP server which is best known for its strong performance serving static content, acting…