In this blog post I will show you how to make some of my favourite CLIs such as nmap, imagemagick and awscli into Serverless Functions with OpenFaaS. Why would you do this?

Logging into servers to run CLIs is manual and slow. Let's show how you can work smarter by turning your favourite CLIs into Functions with their own API via OpenFaaS

Turning a CLI into a function means it gets support for binary inputs/outputs, logging, metrics and control over timeouts. You can also run it asynchronously on a queue with no additional work required.

OpenFaaS makes Serverless Functions Simple through Docker & Kubernetes. You can build and run functions on your own terms on any platform.

Before going into how to turn CLIs into functions, let's look at the normal way to create a function with a cloud-based (Lambda, Azure Functions etc) or Open Source FaaS project such as OpenFaaS:

I've provided a Quickstart guide for the OpenFaaS CLI that let's you create your own functions in common programming languages in just a few seconds such as: Node.js, CSharp C#, Python, Ruby, PHP, Go and Java.

Checkout the CLI Quickstart guide or read on to find out how to make CLIs into functions.

This is where we go off the map into unchartered territory. We're actually going to make a CLI or binary the function. Every web request will fork the process, enter the request body via STDIN and return the process' output from STDOUT back to the caller. You can find out how this works at the end of the post.

Here's some things you could try turning into a function:

Before you run through the examples below you should follow the CLI Quickstart which shows you how to install OpenFaaS and the CLI.

Note: when you deploy your function you may need to wait for it to start before invoking it. If you're working on a remote cluster you may also need to run faas-cli push and enter your own Docker Hub account in the "image" field i.e. alexellis2/nmap

Let's start with something simple, but powerful - the popular network scanning tool: nmap. nmap can be used for a myriad of purposes including finding open ports on your VPS or IP addresses on your home/work network.

We have to add the nmap package into the Docker image so edit nmap/Dockerfile:

Change the following line in nmap/Dockerfile and put the command you want to run as your function into the line ENV fprocess="".

Now if you want to hard-code the nmap command do it like this:

Note this command will scan a home network for hosts

If you want to pass in the parameters when you invoke the command then use xargs before the command.

Now let's extend the timeout for the function since nmap can take a little while to run. We'll pick 60 seconds:

nmap is available pre-packaged from the OpenFaaS Function Store. You can deploy it in 1-click via the built-in OpenFaaS UI portal.

This example uses imagemagick which has been the go-to tool for resizing and manipulating images for decades.

In this example we'll resize an image to 50% of its original size. OpenFaaS will pass in the body of a request via stdin and the result will be written to stdout.

Now we have to do one more thing here - we need to install a package via apk.

I copied this from the ImageMagick documentation and then replaced the input and output file with stdin and stdout.

Now open up image_smaller.jpg in Finder or a photo editor.

Find out more in my blog post: Serverless sorcery with ImageMagick. 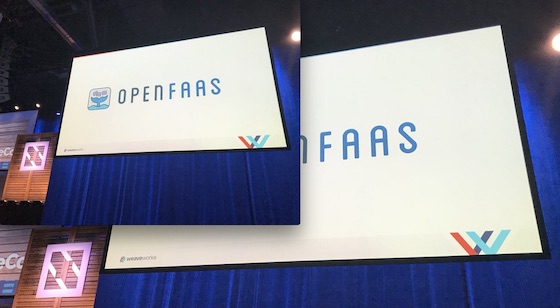 Now let's package up the AWS CLI as a function, so that you can call it like an API.

In order to build a Dockerfile I just followed the instructions in the AWSCLI documentation for Linux.

Add this line to the Dockerfile:

Here's what you get:

If you need to pass environmental variables then edit the YAML file for awscli.yml and add a new section:

That's the end of the examples, I've picked these to give you a taste of what you could do. If you're wondering just how this works under the hood then checkout my latest video at openfaas.com or the Function watchdog reference.

You now have three examples of common CLIs, binaries or executables that you can deploy as functions with OpenFaaS. This is not just limited to Linux, you can also build out functions from Windows binaries too - I'm just not sure which you'd choose - maybe some proprietary .NET tooling your company uses?

If you need to fine-tune timeouts or configure the output or logging of your function then checkout the documentation below:

You can star the project on GitHub openfaas/faas, follow us on Twitter @openfaas or donate via Patreon.

Acknowledgements: I'd like to thank Richard Gee and Eric Stoekl from the OpenFaaS core contributors group for feedback and testing on this blog post.

Get started with KVM & Kubernetes

In this post I want to introduce KVM - Linux's native approach to virtualization. There are many different tools…