ImageMagick is an age-old tool (27 years old today!) for Linux which is used for image manipulation and generation. There's not much you cannot do with it, but one of the most common use-cases I've seen is reducing image size to generate thumbnails. In this blog post I want to give you a fresh take on ImageMagick and deploy it as a scaleable serverless function with OpenFaaS and Kubernetes, or Docker Swarm.

OpenFaaS is Serverless, but on your terms. Build serverless functions using Docker containers and deploy onto Kubernetes and Docker Swarm. Star or fork the repo here.

Follow the guide for setting up OpenFaaS Docker Swarm or Kubernetes below. If you already have a cluster ready or Docker on your laptop then this takes less than 60 seconds to deploy.

Once you've deployed OpenFaaS, we now need to install the FaaS CLI tool:

If you're on Linux or Windows type in:

On Mac you can type in brew install faas-cli

Check it worked with faas-cli version

Clone the CLI from GitHub which contains several samples, including ImageMagick:

shrink-image will reduce any image to 50% of its size.

The ImageMagick sample is deployed as shrink-image. Let's grab a photo from Pexels who provide royalty-free images and then try it out:

If your server is remote, you can also pass the --gateway flag.

How does it work?

Well for every request that comes into the function we fork ImageMagick, feed in the bytes of the larger image via STDIN and then read the response over STDOUT and send that back to the caller. The fwatchdog (fork watchdog) binary is placed into a container as the entrypoint and is responsible for enforcing timeouts and reading/writing values to and from your function via pipes.

How do you do something different?

Edit the fprocess variable in sample/imagemagick/Dockerfile and put 200% instead of 50% - and you can now scale-up thumbnails to double their original size.

Edit the samples.yml file and pick a new Docker image name and function name for your function:

Now we must re-build and re-deploy the functions:

You can now invoke it again:

What else can I do with ImageMagick?

Checkout the ImageMagick homepage here. Any ImageMagick commands can be pasted into the "fprocess" variable and re-built to make an image-processing pipeline that can scale as a Serverless function in your cluster.

Here's an example of a function which can print text (you supply) on top of an image:

Here's an example of what you can do once the function is deployed: 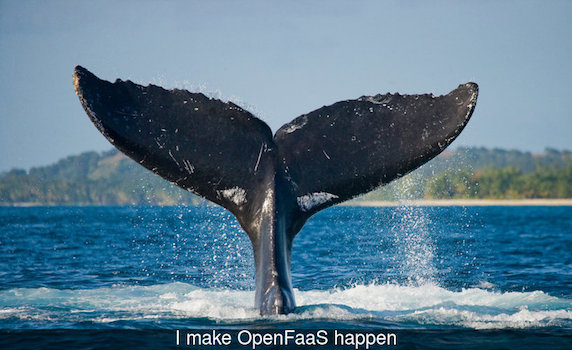 You can even customise the text by passing an addition HTTP header like this:

If you fancy a challenge - why not try editing the function to apply a "Polaroid" style to your pictures?

OpenFaaS is serverless on your terms. There is no need to worry about being locked-in to a complicated architecture, set of tools or a particular cloud vendor.

Find out more about our project by heading over to openfaas.com and be sure to Star the project on GitHub to show your support.

OpenFaaS is cloud native and has Prometheus metrics built-in - so you can run it on any hardware and at scale. Pick private, public, hybrid-cloud or even a Raspberry Pi cluster.

Sit back with a coffee and learn about our CLI

Find out what Serverless is, what the use-cases are and who's using OpenFaaS: