I'm proud to announce that the OpenFaaS community has pulled together to build and launch the first Function Store for Serverless Functions. The mission for OpenFaaS is Serverless Functions Made Simple and that means finding new ways of making Serverless even easier to approach. We already have key advantages such as:

The community asked for a function store from early on and it slowly crept up the ROADMAP.

I think it's no longer an "if" an App Store is right for an eco-system, but a when. The when is now and I want to give you a quick preview.

Deploy OpenFaaS using Docker Swarm on your laptop or Kubernetes with minikube following one of our guides. 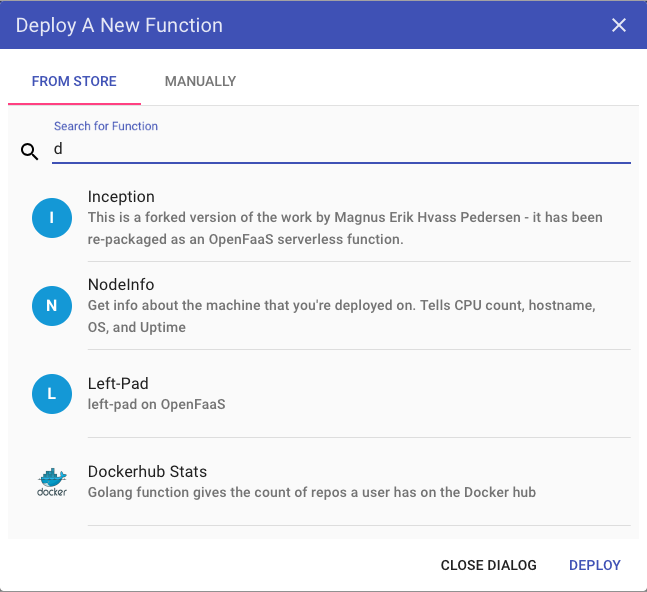 We also incorporated UX feedback from the community by making the manual deployment page easier to use and pointing folks to the more powerful experience of the CLI.

Now open the UI portal and click "Deploy Function" - you'll now see a dialog with all the functions listed and you can even search and filter them by name.

We've already had function submissions for functions from Nic Jackson (Hashicorp) and Stefan Prodan (WeaveWorks) along with several other community members.

You can find out how the Function Store works or submit your own function by raising a Pull Request.

One of my favourite functions (certinfo) reports back on when your LetsEncrypt SSL certificate is going to expire. How handy is that?

OpenFaaS on the road

FaaS and Furious - Zero to Serverless in 60 seconds, Anywhere

You can join the Slack community by emailing an introduction to alex@openfaas.com.

Become a backer of OpenFaaS on Patreon

It's great to see 14 new backers for @OpenFaaS already. We're working on some very cool stuff for next week at KubeCon. #community https://t.co/mtABTRznUM

Or if you're not ready to back the project then please help us reach our goal of 10k GitHub stars by the end of 2017:

Thanks for your support!

Holiday lights that harmonize around the globe