In this post I'll outline several ways to build containers without the need for Docker itself. I'll use OpenFaaS as the case-study, which uses OCI-format container images for its workloads. The easiest way to think about OpenFaaS is as a CaaS platform for Kubernetes which can run microservices, and add in FaaS and event-driven tooling for free.

The first option in the post will show how to use the built-in buildkit option for Docker's CLI, then buildkit stand-alone (on Linux only), followed by Google's container builder, Kaniko.

This post covers tooling which can build an image from a Dockerfile, and so anything which limits the user to only Java (jib) or Go (ko) for instance is out of scope. I'll then wrap things up and let you know how to get in touch with suggestions, feedback and your own stories around wants and needs in container tooling.

So what's wrong with Docker?

Nothing as such, Docker runs well on armhf, arm64, and on x86_64. The main Docker CLI has become a lot more than build/ship/run, and also lugs around several years of baggage, it now comes bundled with Docker Swarm and EE features.

Update for Nov 2020: anyone using Docker's set of official base-images should also read: Preparing for the Docker Hub Rate Limits

There are a few efforts that attempt to strip "docker" back to its component pieces, the original UX we all fell in love with:

An alternative to img would be k3c which also includes a runtime component and plans to support ARM architectures.

Out of all the options, I think that I like k3c the most, but it is very nascient and bundles everything into one binary which is likely to conflict with other software, at present it runs its own embedded containerd and buildkit binaries.

Note: If you're a RedHat customer and paying for support, then you really should use their entire toolchain to get the best value for your money. I checked out some of the examples and saw one that used my "classic" blog post on multi-stage builds. See for yourself which style you prefer the buildah example vs. Dockerfile example.

So since we are focusing on the "build" piece here and want to look at relativelt stable options, I'm going to look at:

All of the above and more are now possible since the OpenFaaS CLI can output a standard "build context" that any builder can work with.

Let's start with a Golang HTTP middleware, this is a cross between a function and a microservice and shows off how versatile OpenFaaS can be.

We'll get the following created:

The handler looks like this, and is easy to modify. Additional dependencies can be added through vendoring or Go modules.

The normal way to build this app would be:

A local cache of the template and Dockerfile is also available at ./template/golang-middleware/Dockerfile

There are three images that are pulled in for this template:

With the traditional builder, each of the images will be pulled in sequentially.

The wait a few moments and you're done, we now have that image in our local library.

We can also push it up to a registry with faas-cli push -f build-test.yml. 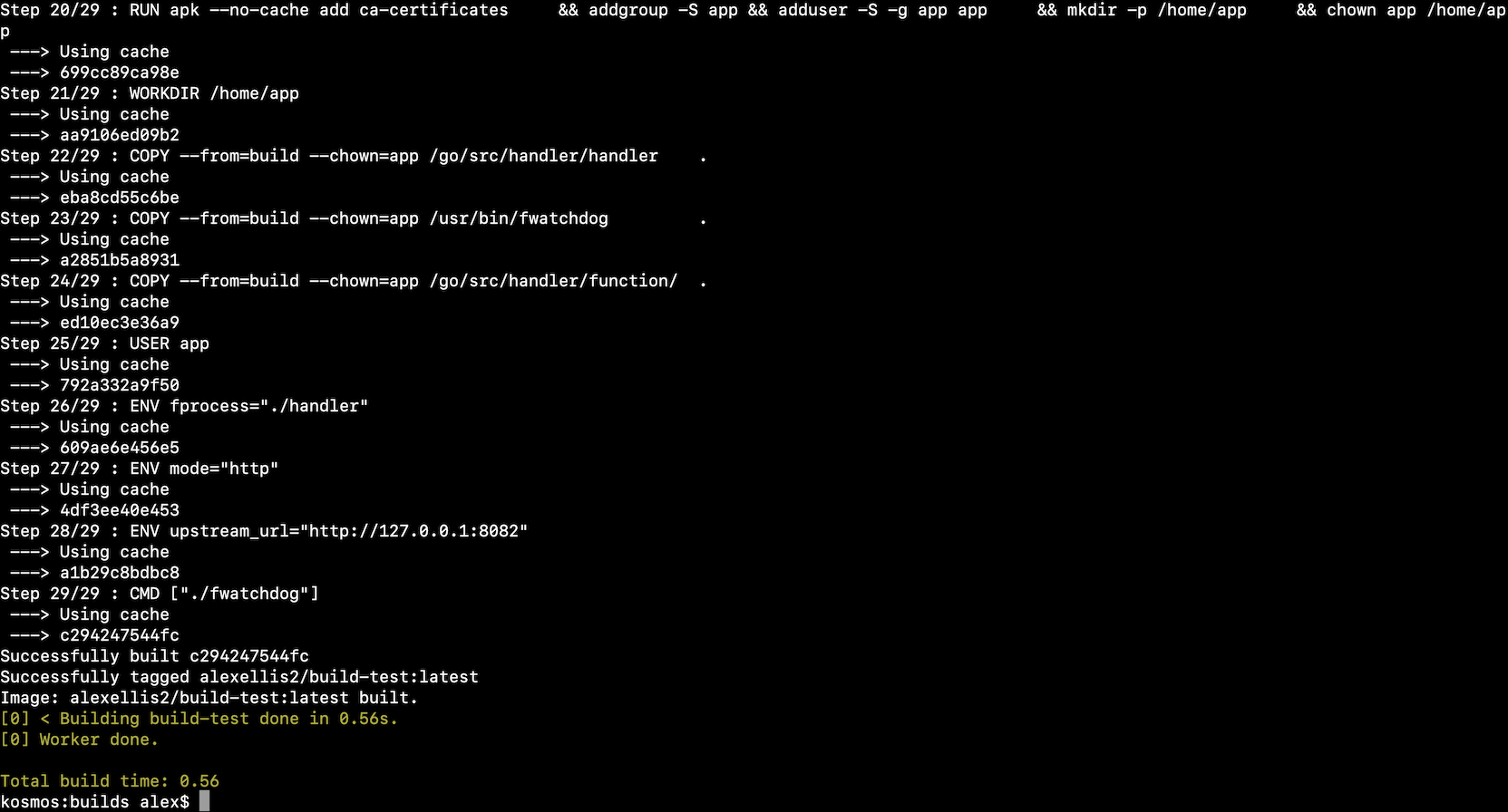 Build with Buildkit and Docker

This is the easiest change of all to make, and gives a fast build too.

We'll see that with this approach, the Docker daemon automatically switches out its builder for buildkit.

Buildkit offers a number of advantages:

With buildkit, all of the base images can be pulled in to our local library at once, since the FROM (download) commands are not executed sequentially.

This option works even on a Mac, since buildkit is proxied via the Docker daemon running in the VM. 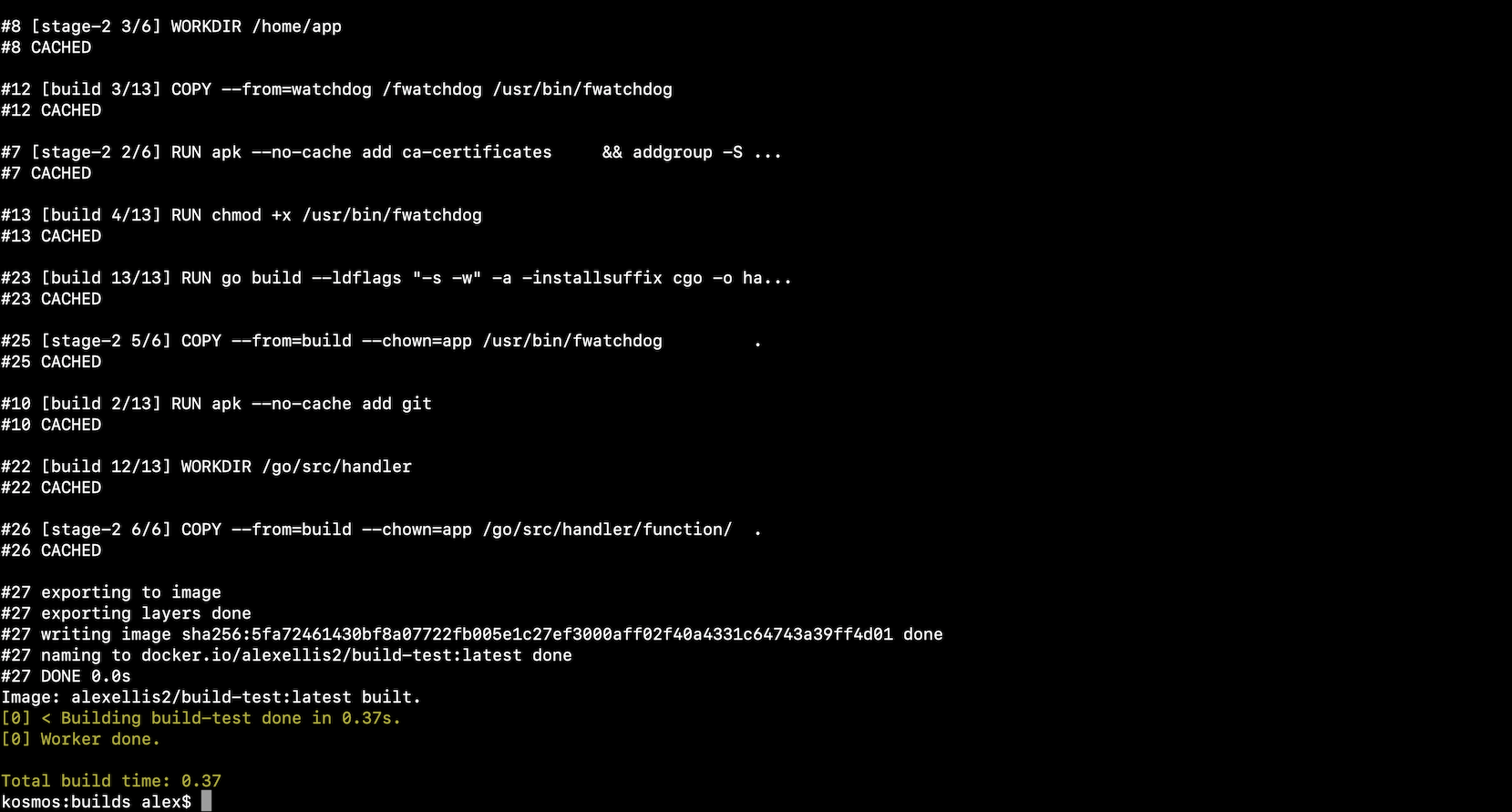 To build with Buildkit in a stand-alone setup we need to run buildkit separately on a Linux host, so we can't use a Mac.

faas-cli build would normally execute or fork docker, because the command is just a wrapper. So to bypass this behaviour we should write out a build context, that's possible via the following command:

Our context is now available in the ./build/build-test/ folder with our function code and the template with its entrypoint and Dockerfile.

Now we need to run buildkit, we can build from source, or grab upstream binaries.

If you checkout the releases page, you'll also find buildkit available for armhf and arm64, which is great for multi-arch.

Run the buildkit daemon in a new window:

Now let's start a build, passing in the shrink-wrapped location as the build-context. The command we want is buildctl, buildctl is a client for the daemon and will configure how to build the image and what to do when it's done, such as exporting a tar, ignoring the build or pushing it to a registry.

Here's what I ran to get the equivalent of the Docker command with the DOCKER_BUILDKIT override:

Before running this command, you'll need to run docker login, or to create $HOME/.docker/config.json` with a valid set of unencrypted credentials.

You'll see a nice ASCII animation for this build.

Build with img and buildkit

Since I've never used img and haven't really heard of it being used a lot with teams vs the more common options I thought I'd give it a shot.

First impressions are that multi-arch is not a priority and given the age of the project, may be unlikely to land. There is no binary for armhf or ARM64.

The build options look like a subset of buildctl:

Here's what we need to do a build:

Now for one reason or another, img actually failed to do a successful build. It may be due to some of the optimizations to attempt to run as non-root. 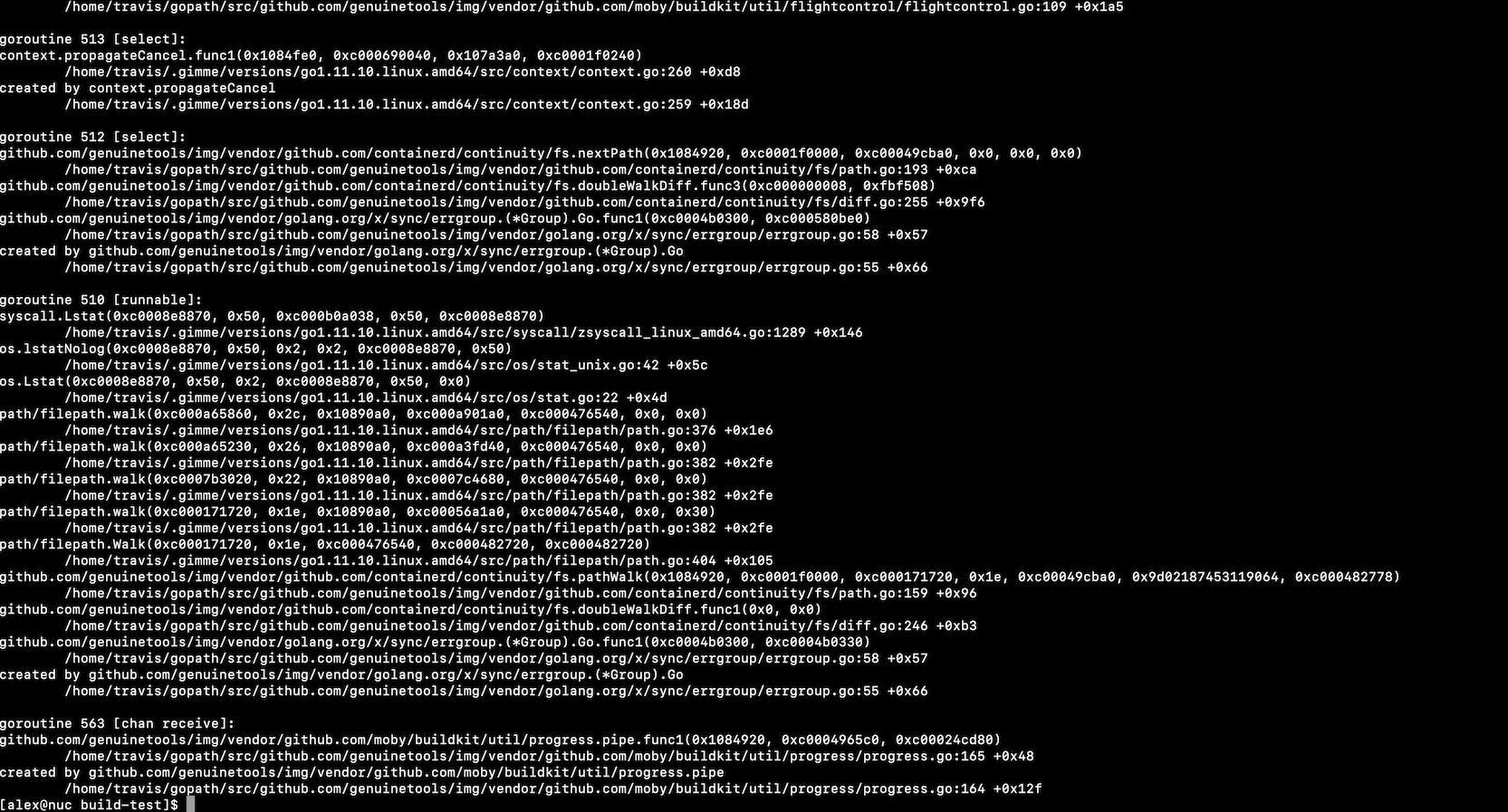 There seemed to be three similar issues open.

I took a look at the build in this blog post 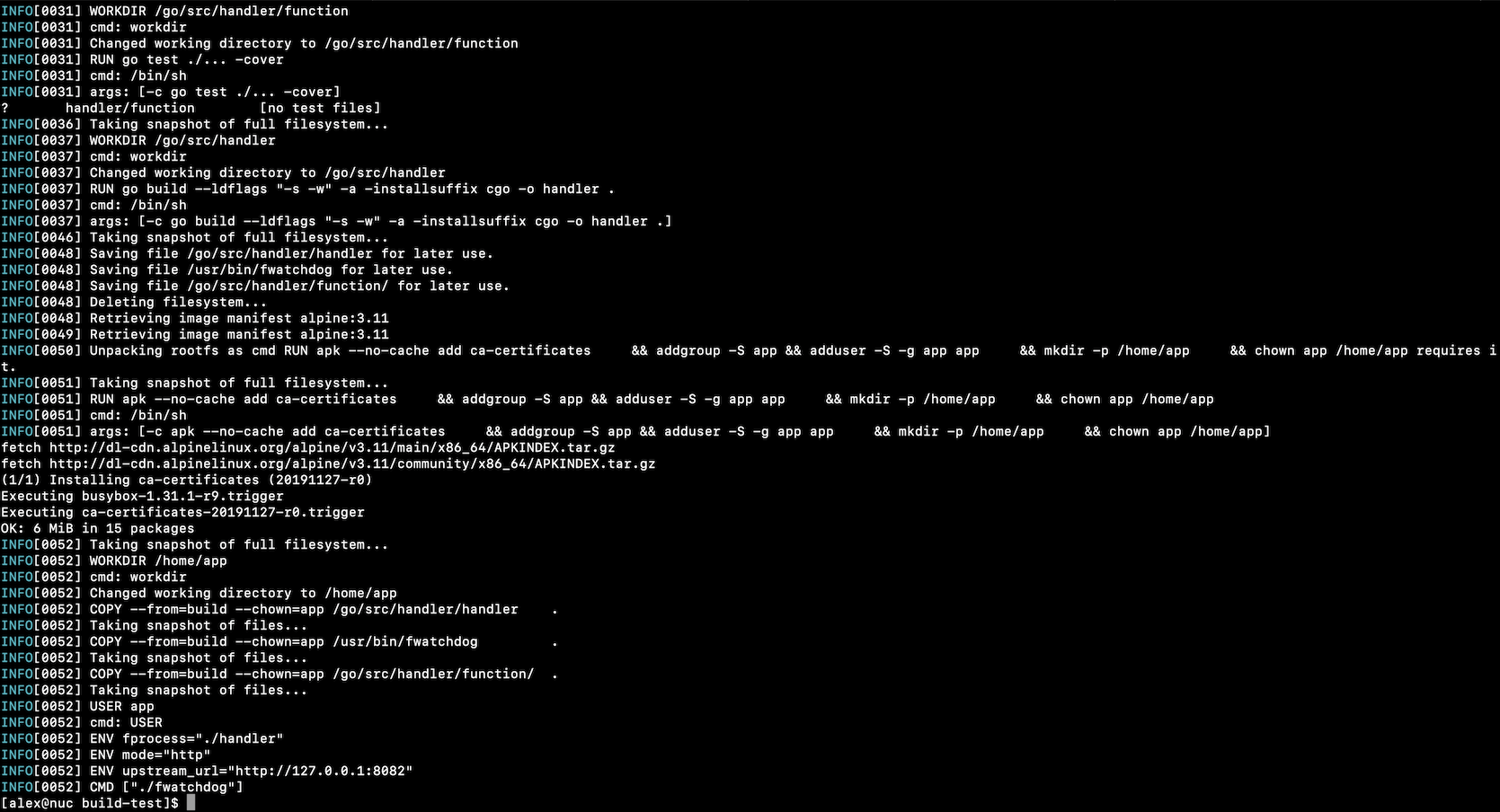 There is some support for caching in Kaniko, but it needs manual management and preservation since Kaniko runs in a one-shot mode, rather than daemonized like Buildkit.

Summing up the options

I also wanted to include a presentation by [Akihiro Suda](https://twitter.com/@AkihiroSuda /), a buildkit maintainer from NTT, Japan. This information is around 2 years old but provides another high-level overview from the landscape in 2018 Comparing Next-Generation
Container Image Building Tools

This is the best option for faasd users, where users rely only on containerd and CNI, rather than Docker or Kubernetes.

You can either use your normal container builder with OpenFaaS, or faas-cli build --shrinkwrap and pass the build-context along to your preferred tooling.

Here's examples for the following tools for building OpenFaaS containers:

In OpenFaaS Cloud. we provide a complete hands-off CI/CD experience using the shrinkwrap approach outlined in this post and the buildkit daemon. For all other users I would recommend using Docker, or Docker with buildkit.

You can build your own self-hosted OpenFaaS Cloud environment with GitHub or GitLab integration.

For faasd users, you only have containerd installed on your host instead of docker, so the best option for you is to download buildkit.

If you are interested in what Serverless Functions are and what they can do for you, why not checkout my new eBook and video workshop on Gumroad?

We did miss out one of the important parts of the workflow in this post, the deployment. Any OCI container can be deployed to the OpenFaaS control-plane on top of Kubernetes as long as its conforms to the serverless workload definition. If you'd like to see the full experience of build, push and deploy, check out the OpenFaaS workshop.

Could you use some help with a difficult problem, an external view on a new idea or project? Perhaps you would like to build a technology proof of concept before investing more? Get in touch via alex@openfaas.com or book a session with me on calendly.com/alexellis.

How to get to speak at KubeCon

The first rule of getting to speak at KubeCon is that there are no rules. The event has grown…