I'm still in the game, so join me as I explore the highlights of a second year of independent business and creating Open Source software. I'll share my top blog posts by views, top interviews, books that have influenced me and a little about each project I maintain. At the end of the post I'll talk about what 2021 has in store.

I had a lot of help this year, so I want to thank all my company's customers, my GitHub Sponsors, and everyone who contributed or helped to share.

Most popular blog posts of 2020

Over the past year, I've focused on developing the OpenFaaS and inlets brands, and I've also experimented with Medium's Partner Program. These are the four blogs where you would have seen me:

Here are the most popular blog posts from the year ranked by views:

I now have hundreds of blog posts going back several years, so it's difficult to read too much into the numbers, as it depends on how much traffic the site gets and where it has trended. A post on Hacker News could get 15k views overnight, and another more impactful post could get a steady stream of 3k per day from organic searches.

This year I've mainly focused on use-cases, and on capturing the imagination. In 2021, you'll see more of the same along with more guest posts on the blogs.

As part of GitHub's readme program, I was invited to write a feature-length piece on independent business and Open Source development

I hope this gives you a deeper perspective on what it's like to be on the hook for a large OSS project.

Craig Box from Google reached out to me and asked me: "Why aren't you working for a FAANG company for 350K USD / year"?

Before I knew it, Craig had sketched out a brief history of my career in a Google Doc, and we were recording a podcast with his co-host

Learn how a developer at a payroll company became a Docker Captain, caused a stir with a prototype, and quit his job to create an independent software business.

I've read a number of books this year that have had an influence on me. I can't say that I finished them all, but I did get something from each that has helped me with my journey.

A good example of this would be Tailwind UI - a series of HTML and CSS snippets built by a designer and marketed to developers. Most backend developers are hopeless at making things look nice on a webpage.

Ultimately, from a business and sustainability perspective, Open Source software fails its creators and only benefits its users.

Having a why and challenging it over time could save us all a lot of wasted time.

A common theme in all of these books was that customers buy ways to reduce and remove pain. It needn't be a 10x improvement, but it should be an obvious solution, and they need to have a sense urgency about fixing the problem.

I would also say that I've become more aware of "Indie Hackers" - these are solo developers who come up with what's usually a very trivial idea, but execute on it hard. One example that caught my attention was a service that just makes banner images for blog posts. That was it. That was the product. From the outside, it looks like a simple idea that is easily copied, but by pressing in, he is now earning 8k USD per month from a platform, which I imagine costs very little to run.

When I compare this to my journey with OpenFaaS, and consider that its recurring revenue on GitHub Sponsors is only around 500 USD / mo, from one end-user company, it makes me question the ideology of Open Source Software.

inlets was created to make tunnels something we could self-host, to get away from the limitations of SaaS products, and to integrate deeply with VMs, containers and Kubernetes.

This year I launched a landing page and blog for inlets PRO. To begin with it was just a few pieces of Tailwind UI tied together that showed pricing and features. It was a starting-point, but then over time it's evolved and now even has its own blog with guest posts.

Most personal customers are choosing inlets PRO to enable their local development, self-hosting needs or to get Ingress into their homelabs.

It only takes a few seconds to create a tunnel server with inletsctl, but next year, if there's enough interest then I may look into building a managed inlets service.

For OpenFaaS my highlight would be faasd. faasd was initially an experiment to see if containerd would make a good back-end for functions instead of Kubernetes. By removing the support for clusters which have natural latency through their event-drive nature, things like cold-starts got so rapid, that they stopped existing. The cost to run OpenFaaS dropped from "a Kubernetes cluster" to a 3 EUR / mo VPS.

We're still only scratching the surface of what faasd will mean for the community.

You end up with something that costs less than cloud functions, and has a much better developer experience, with the ability to "scale-up" into Kubernetes in the future.

See it in action in this community blog post: Tracking Stripe Payments with Slack and faasd

Its real value comes in compounding - when you need several CLIs or Apps for a tutorial or cluster, the speed-up in getting something deployed is huge.

Want self-hosted OpenFaaS, with a public IP and TLS certificate, but running on your laptop, with KinD?

You'd then have a TLS cert for OpenFaaS gateway running on your laptop at https://reg.example.com

The same can be done with other combinations Apps and CLIs too.

k3sup gained support for K3s' new HA mode using etcd and was used in several of my newest tutorials:

If you've not seen it yet, it looks a bit like this:

Through the k3sup install command you can create a cluster with an initial server, then use the k3sup join command and the server's IP to join in your nodes.

For example, provision two hosts, then install k3s to one as a server, and join the second to it. You'll be able to merge the resulting configuration to your local Kubernetes config file too.

Then make use of your new cluster:

I continue to see lots of tutorials appearing for the project, and launched a range of SWAG which was popular with the community.

You can still buy a t-shirt, mug or hoodie and support the project.

I had a lot of help this year, so I want to thank all my company's customers, my GitHub Sponsors, and everyone who contributed or helped to share.

Many of you will be aware of the challenges of developing and maintaining Open Source Software for free, without any form of compensation or value capture. Popularity, contributions and traction are all encouraging, but compound the problem.

I still don't know the solution to making OpenFaaS sustainable in the long-term, but it's clear that giving everything away for free makes for an extremely difficult path to walk.

For that reason I want to thank my GitHub Sponsors who have taken the hardest step of reaching into their pockets. Through your weekly Insiders' Updates, you've got a personal view into the peaks and troughs of my year. 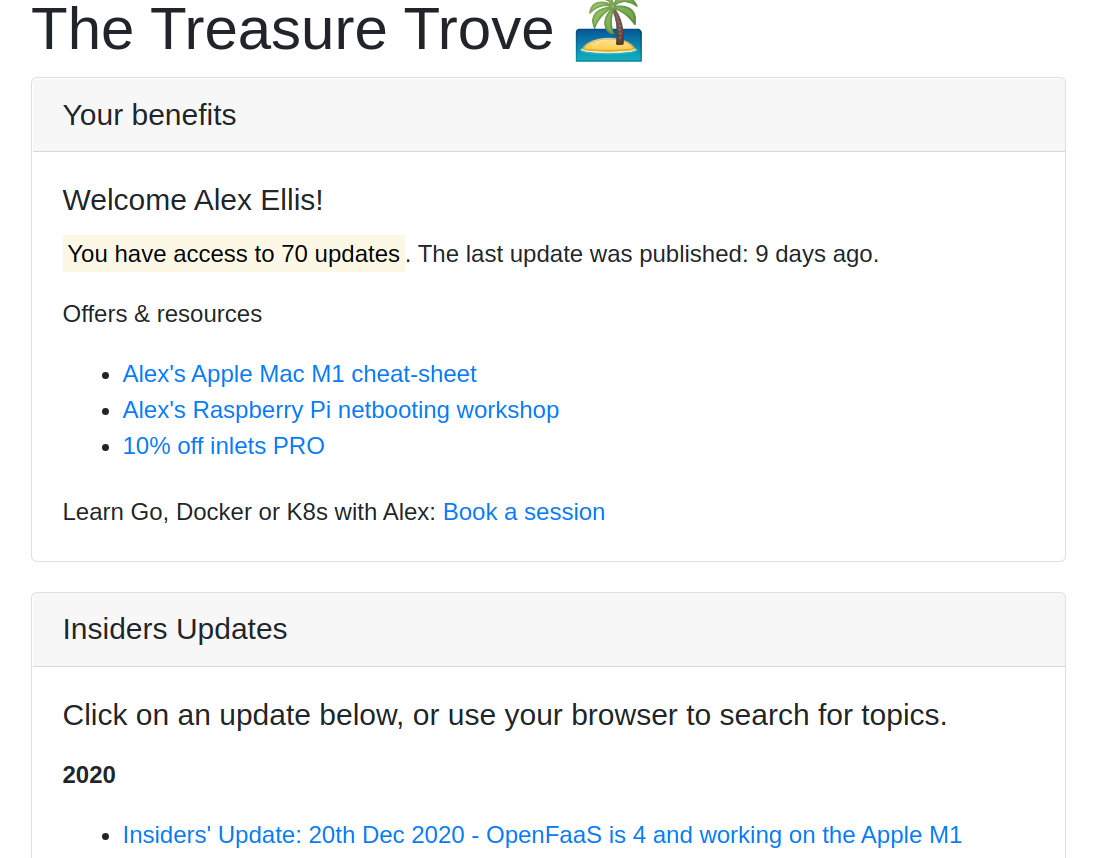 I also created The Treasure Trove for you, where you can go back in time and see over 18 month's worth of updates, tips and private downloads. Did you know that it's built as a Go function, deployed to a faasd instance on a Raspberry Pi 3, linked to the Internet through inlets?

Over the past year I've helped several companies reach and engage developers through engineering as marketing, writing, social media and my expansive network of maintainers and influencers. I want to thank Equinix Metal, Dialog exe AS, The LinuxFoundation, Sysdig, Venafi, Rancher, Civo and others who worked with my company this year. We are just getting started here.

I don't know what 2021 will hold for us all, but I am ready for the challenge and still in the game.

How you can help

Has my work helped you in some way? Have I inspired you on some level? Did you ever think: If Alex can do it, then maybe I can too? Maybe you needed to get some help at work, and when you Googled Kubernetes, Golang, or Docker, my name kept coming up. Maybe you use multi-stage Docker builds, did you know I wrote that tutorial you used?

You can support my continued Open Source and community activities in one of these ways:

If you're building your own thing, and know how important developer-experience and community are, then check out OpenFaaS Ltd consulting services and reach out to the company. We have helped brands big and small to drive up engagement and expand their reach.

Did you know that I write tutorials about Kubernetes and Docker and build cloud native applications for a living? I now offer my time to companies to help them understand how to fit together a Cloud Native architecture. We have a lot to talk about, you can start today with a one-off call - 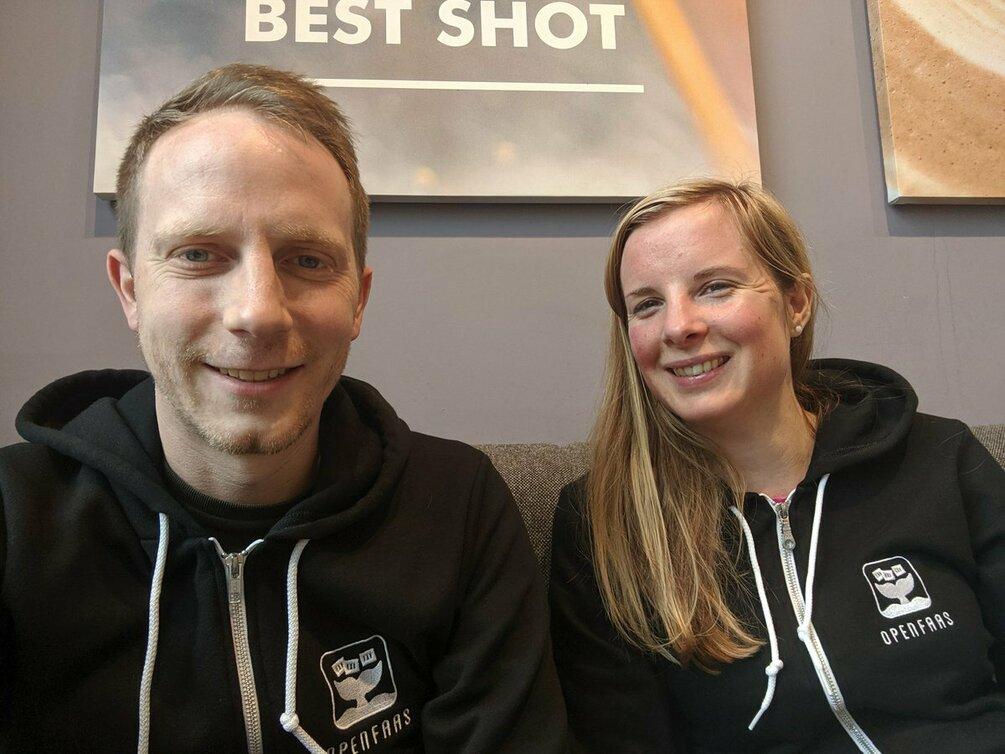 Here I am with my wife Erin wearing our OpenFaaS hoodies

Every professional can benefit from a coach, someone to help you find the answers, to suggest ideas and to keep you accountable. Book a 1:1 session with me via Zoom.

Self-hosting Kubernetes on your Raspberry Pi