The basic concept of PiWars as detailed on the official website is that competitors pit their robots against each other in a series of challenges to earn points. At the end of the day prizes are given out for various objective and fun categories such as Robot with most LEDs etc.

If you've ever seen the TV classic of Robot Wars then think of this as a toned-down version of that where the Raspberry Pi is king and everyone gets to go home with their robots in one piece at the end.

The first PiWars was held in part of the Cambridge Astronomy campus in 2014, I took along a small yellow robot which I had converted from an RC car and won the best non-competing robot category. It was a complete geek-fest with robots of all shapes and sizes entered by individuals, colleagues, parents with children and a couple of school classes.

This year PiWars was rebooted at the Cambridge Computer Laboratory - a spacious hall with canteen, lecture halls and additional rooms for the competitors to go to and tweak their robots. The organisers had clearly spent a huge amount of time designing all the courses from the hardest obstacle course I've ever seen to Pi Noon (pop the balloon) to skittles to a printed rubber mat for line following. 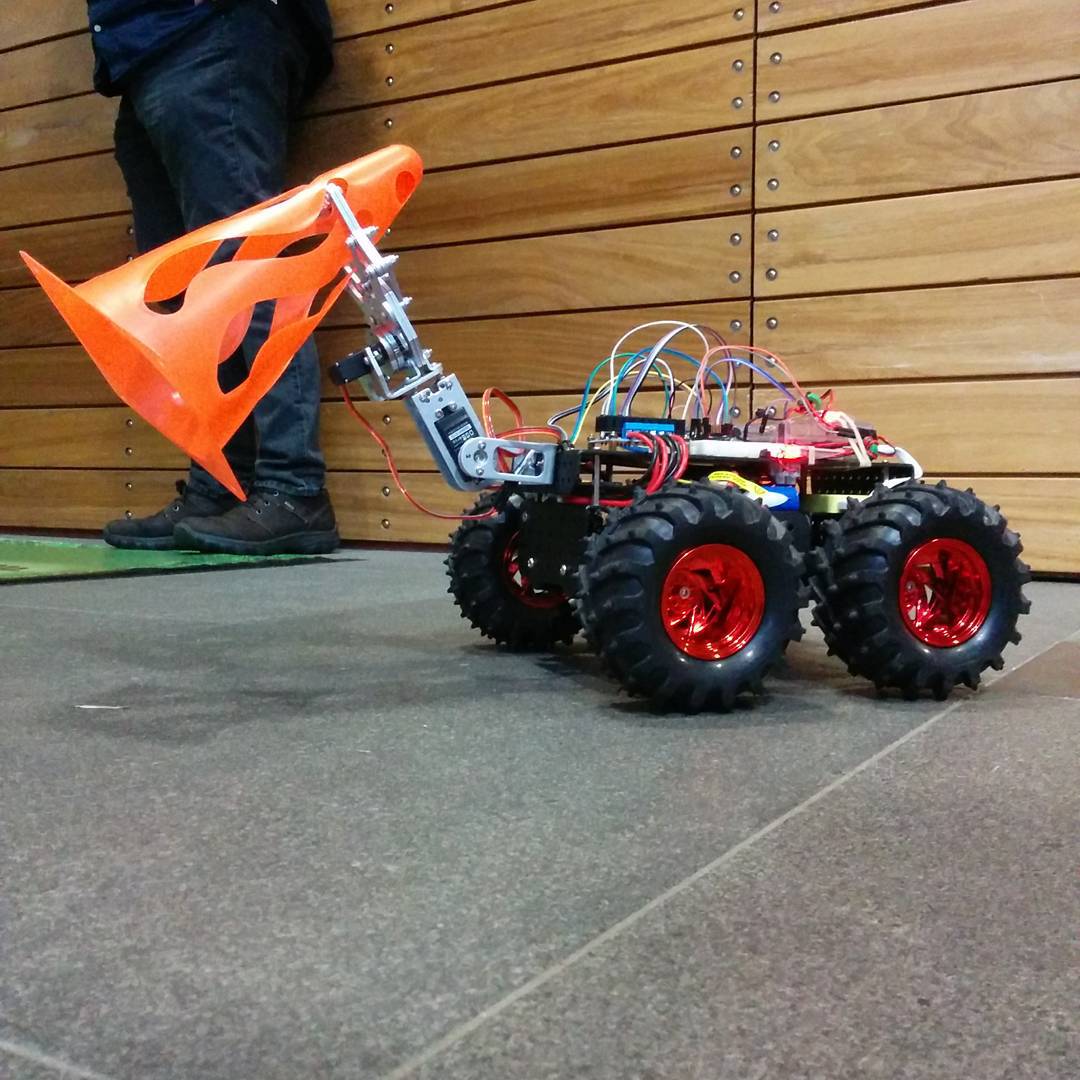 I had planned to enter a robot this year, but decided to go for a brand-new chassis and that presented some unexpected problems. My robot was only really ready for the obstacle course and would have needed much more work for the autonomous challenges. So I brought it along as a spectator and had some fun dragging chairs across the floor and playing with the cones.

I caught the eye of Linux User and Developer magazine using my robot's arm to take part in a skittles competition.

This really caught the eye of Gavin Thomas from Linux Developer and User magazine who went on to take a quick interview about my robot and then published a full page photo of it in the middle of the obstacle course in issue: 161. It was a nice surprise so I've bought a copy to put away. 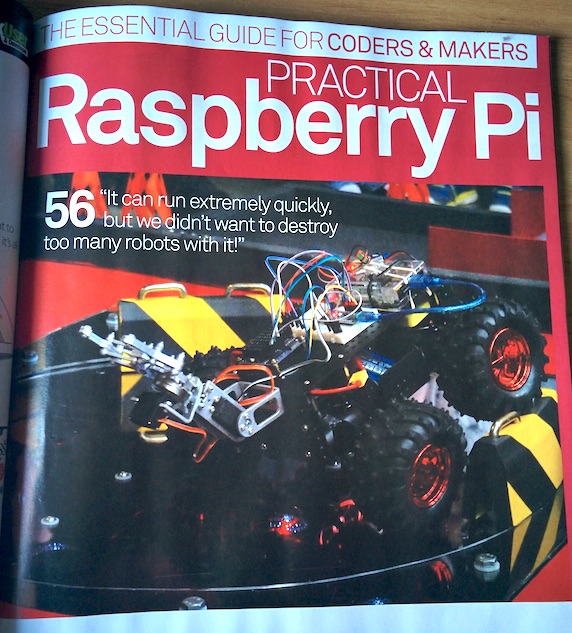 Most of what you can see is from a kit called the Wild Thumper manufactured by Dagu in the far east. I bought mine from Robosavvy but a few other places also stock the kit.

The base kit includes:

In addition to the base kit I had to do quite a bit of work to find an affordable motor controller, write code to connect the Arduino and a PS3 controller. It is primarily direct-drive from the controller.

Final checks in the workshop before the event 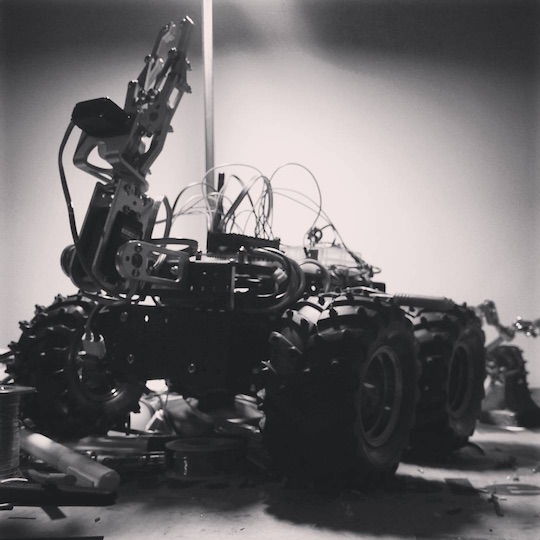 In my PiWars 1.0 robot I used the RPIO.PWM library to generate PWM pulses through software and the PI's DMA interface. This library has sadly been abandoned by the author - from what I have seen on the Github issue tracker a lot of work would be required to support the Pi2. This made me look to the Arduino Nano - as a co-op board, they are effectively cheaper than £2.00 and very easy to program.

The Arduino is responsible for sending left/right, forward/back and servo positions through to the motor controller and servos. I needed something that could drive a motor controller reliably and I settled on an Arduino which excels at generating the required signals.

I connected the Arduino (at 5v) to the Raspberry Pi (at 3.3v) through a short USB cable meaning I do not need to worry about any voltage differences.

An Arduino can be connected to an RPi through serial cable with a logic level converter or through a USB cable without extra electronics.

I then opted for a simple one-way message from the Pi to the Arduino of a fixed length:

While there are other ways of doing this, it appeared to have very little lag or jitter so I kept things simple.

I paired the bluetooth controller to the PI with a program called sixaxis, then installed bluez tools packages and set the bluetooth service to start on boot-up. In my main program (written in Python) I make use of the pygame library for reading the buttons and stick positions and then feed that into the Arduino.

I also set up a WiFi dongle to connect to a hotspot on my phone - this lets me upload/edit/debug code, upgrade the base system and start/stop the code. With the original robot and its single USB port - I had to reboot every time I wanted to use WiFi or Bluetooth, this is much more time-efficient.

If you want to use a PS3 dual-shock controller it has to be a genuine product or the Pi won't be able to pair wirelessly.

The Arduino's code is written in C and involves some basic string parsing and then GPIO/servo messages. It's one-way communication meaning I can keep the code concise.

The Raspberry Pi code was written in Python with unit testing in mind, I have fake joystick and Ardiuno classes which let me code on my laptop instead of on the device directly. I also wrote unit tests against the string formatting I mentioned above for the motor/servo messages.

This is still very much a work in progress, but I will release some of the code to Github and hope that will be useful to some people.

I would like to add in a GPS receiver and digital compass, as long I can find a way to shield them from the motors and interference of the large metal chassis.

New domain When I started this blog I registered a domain over at Namecheap of ae24.space and set…