A few weeks ago I'd never heard of mechanical keyboards and if asked what one was I would have had no idea. A mechanical keyboard as opposed to a 'regular keyboard' is expensive, large, loud and specialist but with good reasons and I would recommend you look into getting one.

like instant vs freshly brewed coffee: both will keep caffeine withdrawal at bay, but one costs more and delivers a better experience 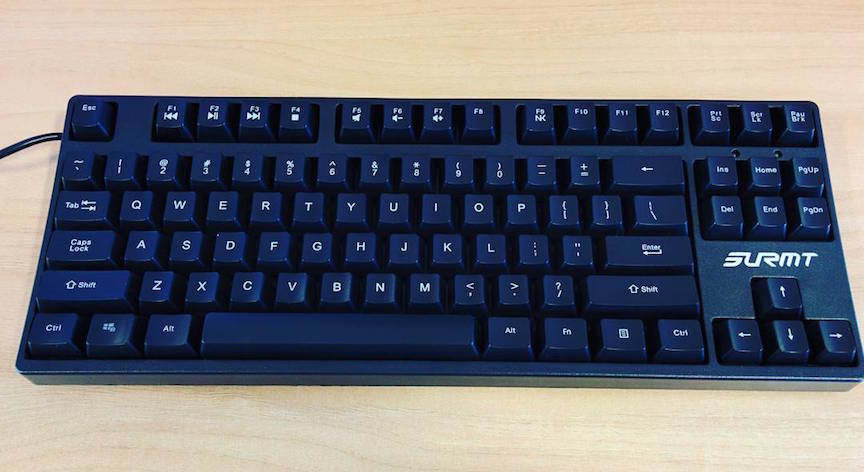 They cost more because under each key is a separate mechanical switch, which has been designed to give a particular sound and feel. The Cherry MX switch is the most popular switch, but there are also some cheaper clones which can mean a keyboard can cost £50 instead of £150.

If you like me did not know what a mechanical keyboard was - then this is another reason why they cost more, there is less demand for them. They are effectively a specialist item and my analogy would be: instant coffee vs freshly brewed, both are coffee and will keep caffeine withdrawal at bay, but one costs more and delivers a better experience.

My experience of mechanical keyboards has been of a large chassis containing aluminium or a thick, premium plastic. They also have additional weight of around 104 switches and reinforced keys. Some have no covering around the keys meaning you can see the whole switch, that is good for cleaning and a fresh look. The closed format looks very similar to a regular keyboard.

Now this was a revelation for me - there is a kind of switch that is designed to be loud and clicky. The selling point is that the click gives feedback and lets the user type faster as you know whether a key was hit or not. I've included two recordings taken through a Nexus 5 placed a few inches away from the keyboard.

If they both sound the same, listen out for a clicking noise in the first recording.

The first thing you need to know before buying a mechanical keyboard, is where and what you are going to use it for. It makes a difference due to the range of keys and customisations available.

A brief summary of switches:

Other keys are available along with O-Rings which can be placed under the key to give a dampening effect. Most of the sound I've experienced is from heavy typing - where the key goes all the way down and hits the casing. Also note that some products may be sold with replica Cherry MX switches. 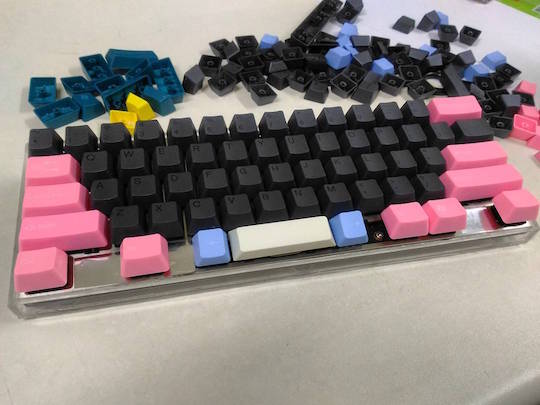 Keycaps are the individual keys attached to each switch. These can be switched out to give a multi-colour effect. You can even buy keys with the text printed on the side of the key - or completely blank keys such as the Das Keyboard Ultimate model.

Some keyboards come with a single-colour backlight, LED chasing functions, macros and programmable keys. I won't talk much about this, but it is worth being aware that some products are aimed at hardcore gamers while others are aimed at programmers.

There are three main layouts you will find when buying.

After reading up about all the switch types and listening to some recordings I decided I wanted the maximum typing experience and went for the Blue switches. I ordered the following product from Amazon which I also found on eBay in China.

It arrived in a plain cardboard box along with a free mouse-mat. I plugged it into a USB port and it worked straight away on a Mac, Windows 7 and Windows 10. There were several modes for the back-lighting from a constant lighting to a key-press chasing mode which could probably give your password away! The top plate of the keyboard was a plush and premium brushed aluminium, which gave it a very luxurious feel. It also had an open chassis meaning you could see the whole key and switch.

I used the product in a relatively quiet open plan office for about a week before the complaints started to roll in, fortunately Amazon offers returns and I found a category that summed up my problem in the form.

Before boxing the product up for return I tried it in my home office. I found the sound of the Blues to be getting on my own nerves as each key press was reverberating from the keyboard's aluminium open-top. One option was to add O-Rings under each switch, I tried this on several keys but found it made the typing experience less fluent.

After much scouring of the interwebs I found a tenkeyless keyboard with Brown switches for under £40. I ordered on 10th Feb and it arrived on the 29th which is record timing for AliExpress/China.

As pictured in place, at the office the model without number-pad gives plenty of space for a mouse. It was shipped in a plain box with a tool for removing key-caps and a warranty card, but nothing else. In comparison to the first product the sound is buttery and muted. It is also very weighty in its completely plastic shell. The text is printed onto each key rather than laser etched and can be felt as it is slightly raised.

If I have to be critical about this keyboard: the springs under the two Shift keys on the left and right feel different, one is slightly harder to depress. The keys which are stabilised by springs give off a slightly hard reverberation (space, shift, enter etc), but I have no idea whether this would sound better on a keyboard 3x the price.

I think I've found the right mechanical for me - quiet enough to use in the office, sturdy build quality, the right price (think: 50% cheaper than an Apple wireless) and a satisfying fluent typing experience. Going back to a Microsoft Natural Keyboard now feels dull and slow in comparison.

My buying advice would be to use a supplier which has no quibbles returns, so that if you are not happy with it you can try something different. Chasing a bargain is important for me, but getting the right layout and switches will pay dividends in the long-run, so I'd suggest doing plenty of research before committing to purchase. The reason I have bought with a US layout is that I have become used to the layout on my MBA, so don't want to have two layouts to contend with - be careful as often the product you will receive is not the same as pictured.

Suppliers in the UK:

Feel free to ask questions in the comments.