I've owned an iPad Pro since around March/April 2018 and have found it to be worth its weight in baggage allowance. So I am writing up my experiences including why I like to travel with the iPad and why I think the Pro is better value.

First let's look at why I chose the iPad Pro over the base edition.

The core differences between the iPad and iPad Pro used to be the ability to use an Apple Pencil for sketching and as a stylus. This changed in 2018 with the iPad at a lower price-point aimed at education. I originally bought this version and exchanged it for an iPad Pro.

There were two main reasons for this - the first was that the Pencil's point does not appear to touch the screen when drawing - it touches a top layer which makes it hard to draw. The second reason was noticable lag with the base iPad. When writing several letters (especially if not joined up) - I would find that I'd be writing the next letter only to see the previous letters still being rendered. This may be personal preference but I found it distracting.

I bought and tested the base model at home and foumd the single speaker to create a confusing an uneven sound with music only coming out of the top of the device. When in the landscape orientation this sounded even worse. The Pro edition gives a much more even sound stage with good volume.

The colour and white-balance of the Pro's screen adapts to the surrounding light. I didn't think this would be important but when travelling I use the iPad in varying lightning conditions - most of which are dim or poorly lit so this feature is welcome.

The bezel on the base model is thicker and has a smaller screen - this does affect the space available for drawing.

There are several other features the Pro edition touts like the ability to connect a smart keyboard (something I didn't need). The resolution of the webcam is also higher which I thought would be important for video calls and using Zoom.

You can compare Apple products using their store.

These are the features that make the device most useful to me and make using it more satisfying, but if it's stretching the budget too far you may find a refurbished model which will look like new from Apple but is kinder on the wallet. Since downloading dozens of movies for watching offline wasn't a priority for me I bought a model with 64GB storage.

Now let's move on to my use-cases.

You may be wondering to yourself: "Do I need an iPad?" and the answer is probably: no, but if you can afford one I think it can be really useful on the go.

When travelling for work or attending conferences I often take notes (even if I don't read them later - I find the act helps me internalize the information). The notes app on the iPad is perfect for this and if you enable the grid view you can keep on writing for as long as you want and export to PDF or a PNG file when done. The export is especially useful for sharing ideas.

I've used the Notes app and the Apple Pencil to sketch up flow, block and architectural diagrams. It is said that a picture can paint a thousand words - so when writing blog posts, working remotely or contributing to an Open Source project using Pull Requests and Issues this can be priceless.

Here's an example drawn with the Apple Pencil: 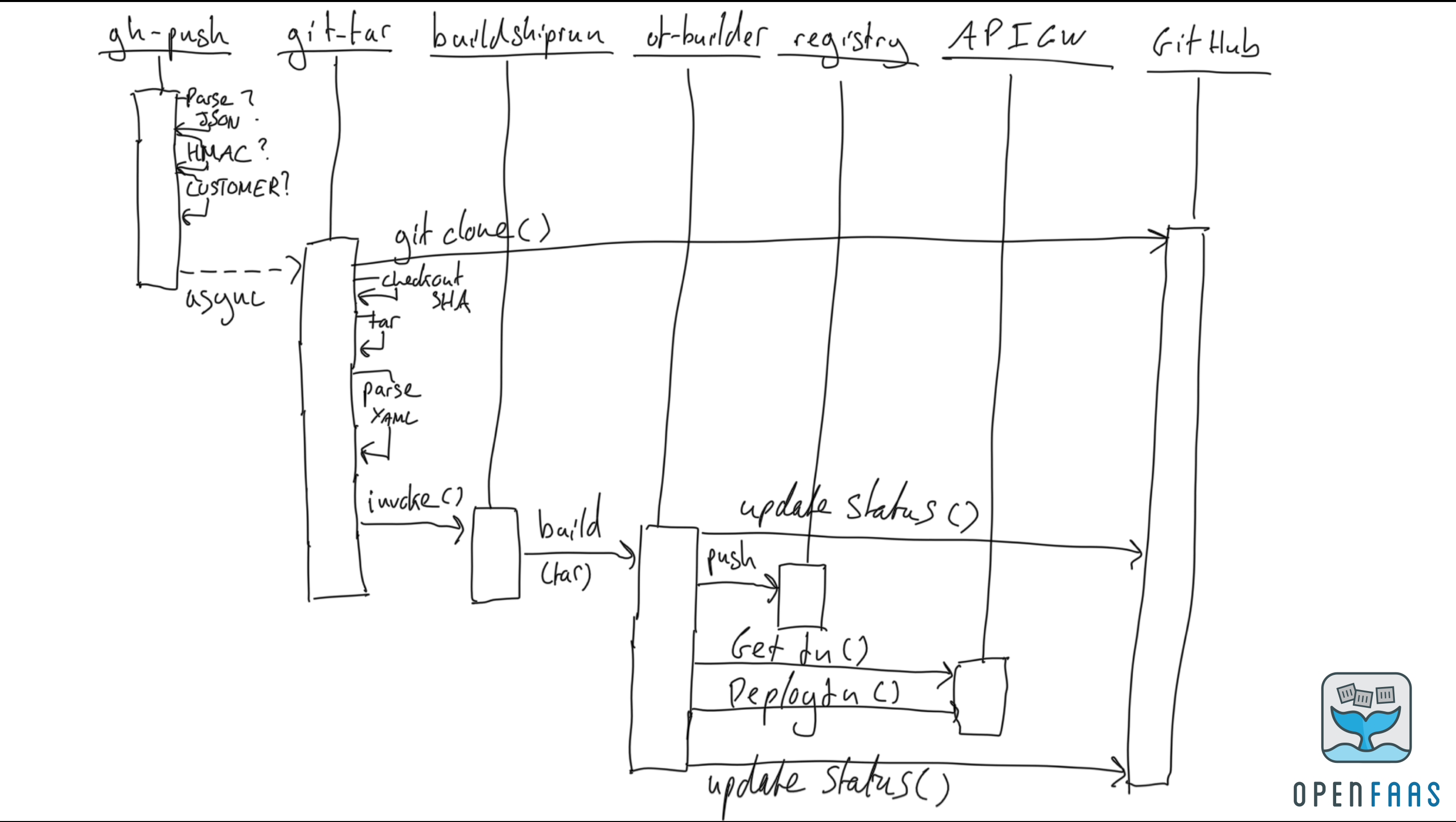 You can also put together a diagram using a tool like draw.io

Out of the three options I'd say that if you already have the iPad then it's the quickest option and if you want to invest more time you could re-draw it later with draw.io or similar.

Music / videos whilst away from home

I also use the iPad to listen to music on Spotify and to watch YouTube video whilst away from home. The iTunes store also has lots of free Podcasts available and listening on the iPad during a long flight can mean saving the battery of your mobile for important use at the other end of the trip.

The current iPad models retain a 3.5" Stereo audio jack - so for the time being they are compatible with all kinds of headsets whether that is Bluetooth such as the Apple AirPods or an analog in-line connector.

The resolution of the iPad and the work GitHub have done to make their site mobile-friendly means I can review code changes, provide user support or log issues / ideas whilst on the go.

You can download one of several apps designed to connect to remote SSH sessions. I do this on a regular basis using the "terminus" app, but others are available. You can also create a HTTP tunnel back to a remote machine when travelling to view websites in your own locale such as the news or TV streaming on the BBC iPlayer which would otherwise be blocked. Just note that the speed will not be great.

One of the other things I do is to connect to the various Raspberry Pis I haev in my house to download any data I may need or to build binaries/Docker images.

The iPad can also be used to test the user experience of web-pages you create or contribute to. Here's an example of an early OpenFaaS Cloud Dashboard running on an iPad made with Bootstrap and React.js:

The OpenFaaS Cloud dashboard is now written in React and served by a function. Push code to @GitHub in a private or public repo and get HTTPS endpoints for your functions #gitops #Kubernetes #serverless pic.twitter.com/vqycjnfo3Z

When travelling for work, events and on holiday I find it useful to have a full-size map that I can interact with through touch. I'll look up local attractions like museums, plan a walking route or find somewhere for a coffee or dinner.

This might feel like an expensive accessory but protects the screen and is magnetic so means the device can be propped up in landscape mode.

I'm not sure what to call this, but get one. On several occasions I dropped the Apple Pencil or it rolled off a smooth surface to send the lid flying across the room. The lids are not cheap cheap so a "tip keeper" is worth the 3-5 USD it will set you back on eBay.

You'll find apps for things like Twitter, Strava, Google Maps and Slack so you can keep in touch and keep in touch with your networks on a bigger screen.

It's worth noting that if you plan to buy abroad to take advantage of the exchange rate, then you may still need to pay taxies or duties when returning home. Best look this up in your home territory before you go.

That covers my reasoning for the Pro model over the base model and what I find most useful about having a "pro" tablet when traveling. I don't try to do any coding on the device, write lengthy articles or connect to work email. If that's something you need then I'd suggest taking a look at the Microsoft Surface range or a lightweight Macbook 12".

What do you most like about your tablet or mobile device whilst traveling? Share your tips in the comments below.

This is a recap of my experience at the Open Source Summit in 2017. A draft that I never…