I have put this guide together to help you get started with Docker 1.12 (or newer) on your Raspberry Pi. For simplicity we will use the default operating system for the Pi - called Raspbian. This guide currently works with most models of Raspberry Pi and I'd recommending using the Model B 2/3 or Zero.

Don't know what Docker is yet or what you could use it for? Check out Understanding Docker from the offical docs.

Already using Docker on your Pi?

Head straight over to my Live Swarm Deep Dive video where we connect multiple Raspberry Pis to together to create a Docker Swarm.

The Raspbian Jessie Lite image is the same as the regular image but only contains the bare minimum amount of packages.

I used to give instructions for using dd on Mac and Linux with a third option for Windows. Now I recommend Etcher.io which will flash your SD card in the same way whichever of those Operating Systems you use on your PC/laptop.

Now follow the instructions in Etcher to flash your SD card. There is one more thing we have to do before ejecting the SD card.

To help prevent Raspberry Pis around the globe from being hacked the RPi foundation have now disabled SSH on the default image. Just create a text file in /boot/ called ssh - it can be blank or you can type anything you want inside it.

Make sure it has no extension such as ssh.txt - it must just be ssh.

Once you boot up the Raspberry Pi you will be able to locate it on your network through the bonjour/avahi service.

For security reasons it is advisable to change the password of the user pi with the passwd command.

At this point you may want to edit the hostname of the Pi. Use an editor and change the word raspberrypi to something else in:

If you are using the Pi for a headless application then you can reduce the memory split between the GPU and the rest of the system down to 16mb.

Edit /boot/config.txt and add this line:

An automated script maintained by the Docker project will create a systemd service file and copy the relevant Docker binaries into /usr/bin/.

Until recently installing Docker on a Pi was a very manual process which often meant having to build Docker from scratch on a very underpowered device (this could take hours). Lots of hard work by ARM enthusiasts Hypriot has helped make .deb packages a first-class citizen in Docker's own CI process.

If you would like to opt into using a testing version then replace get.docker.com with test.docker.com. This will bring down a newer version but it may still have some open issues associated with it.

Beware that this work does not extend to non-Debian distributions such as Arch Linux or Fedora. Arch Linux for ARM currently has Docker 1.11 available in its package manager pacman.

There are a couple of manual steps needed to get the best experience.

You can now reboot the Pi, or start the Docker daemon with:

After making this change, log out and reconnect with ssh.

Support for ARM and the Raspberry Pi is a work-in-progress item which means there are a few things you should know.

Pulling images from the Hub

If you pull down the busybox image from the Docker hub it will not function correctly. This is because the contents are designed for a regular PC or the x86_64 architecture. There are on-going efforts to fix this in future versions of Docker.

We should only attempt to use images which we know are designed to work on ARM. At present there are no strictly official images but the Docker team maintains a number of experimental images under the prefix arm32v6.

Update 30th May 2017: the armhf account has been renamed to arm32v6 - so for future reference use the arm32v6 prefix instead.

Try the image and type exit when you are finished.

We launched sh - a BusyBox shell, but we could have launched any command directly.

Here's another example without using the shell - we just run the date binary directly:

An image made by Resin.io is used by the current Docker build process to create a base image which is usable on all supported versions of the Raspberry Pi. It is a light-weight version of Raspbian Jessie which makes it a good choice.

Build your image like a regular Docker image but use resin/rpi-raspbian as your base. Let's add curl and ca-certificates and create an image which will access docker.com.

So build the image like this, and then run it:

After building an image with Docker you will see it in your library. Use the docker images command to see all the images you've built so far.

If you want to delete the curl_docker image type in: docker rmi curl_docker.

The same with Alpine Linux

Alpine Linux doesn't use apt-get to package its packages but a tool named apk, here's how to achieve the same thing:

To build and run the Alpine container, you can do exactly the same thing or use a different image name:

This Dockerfile uses Resin.io's Raspbian image as a base and pulls down Node 4.5 LTS from the official Node.js site.

To build and run the image:

You can now test out a few Node.js instructions or fork my simple hello-world microservice on Github to take it further.

Make use of GPIO

In order to make use of additional hardware and add-on boards you will need to access the GPIO pins. These require an additional flag at runtime of --privileged to allow the container to write to the special area of memory managing GPIO.

The standard RPi.GPIO library will work through Docker including the libraries from several hardware manufactures.

This is a sample Dockerfile for using the defacto RPi.GPIO library.

Build this image as a basis for adding your GPIO scripts at a later date.

The following Python code can be used to will blink an LED connected to GPIO pin 18. 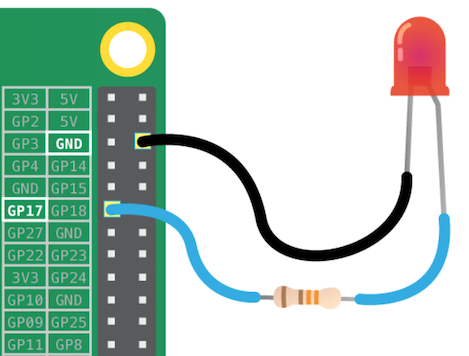 Just use ADD to transfer the script into a new image depriving from gpio-base:

You will need to run this container in --privileged mode in order to be able to access the GPIO pins.

If you enjoyed that then how about making an Internet-enabled buzzer or cheerlight? Here's an example of using the Python Flask library to create a web server that controls a GPIO pin:

For more on interacting with GPIO head over to the Raspberry Pi Foundation's Getting Started with Physical Computing worksheet.

Contact me via Twitter @alexellisuk or in the comments section below. What do you want to see on the blog next? Have you tried it out? Let us know!

Follow all the Captains in one shot with Docker

Have you met the Docker Captains yet? There's over 67 of us right now and we're spread all over…

Bring Linux apps to the Mac Desktop with Docker