We'll be using OpenFaaS today and its ruby-http template that gives full control over the HTTP request/response for your functions. OpenFaaS is a next-generation PaaS called a FaaS which allows users to run microservices and functions on any machine.

My buddy Paulo Arruda shut down his faastRuby service this month, so I wrote up this tutorial to welcome Ruby developers to the OpenFaaS community.

Great chat today with fellow software-engineer @parrudanet. He's is building @faastruby - a first-class Ruby FaaS platform and his journey reminds me a lot of my own. Thanks @thinkshiv for the intro. #serverless #faas #ruby pic.twitter.com/EhNSR7tuBi

We'll deploy OpenFaaS, then go on to build a series of functions using Ruby to generate text, JSON, and HTML. We'll also make use of Ruby Gems.

Want to see how OpenFaaS, Docker, and Kubernetes can all play well together? Checkout my new video from the Cloud Native London conference: Serverless 2.0: Get Started With The PLONK Stack

OpenFaaS provides a complete platform for FaaS and microserviecs out of the box by building upon industry-standard projects from the Cloud Native Computing Foundation such as Prometheus.io and Kubernetes

A new community member Josh Michielsen wrote up a concise tutorial for installing OpenFaaS and its CLI on any machine using k3d from Rancher.

If you run into any issues, please use the docs and feel free to join Slack and ask for help there.

Each OpenFaaS function can be built from a template, or by using a Dockerfile. I created the ruby-http template for users who needed native compilation of Gems (using Debian as a base) and sane defaults such as a non-root user and a light-weight runtime image.

Before you get started have a look at how the ruby-http template works by browsing the README.

In order to deploy the function, change the image from my-website:latest to include your Docker Hub username i.e. alexellis2/my-website:latest. Each time we deploy the code, a new image will be pushed to the registry and our cluster will pull it down and run it for us.

Here we see that we can return a body and a map of response_headers. The default advertises the response as text/plain mime type.

We also get a Gemfile where we can provide a list of gems:

The good news is that you can include Gems here that require native compilation such as Nokogiri. They will be built and pushed up inside the image that we build.

Now deploy the example with the following:

The up command does three things:

The OpenFaaS back-end will then pull down your image and run it.

Open the OpenFaaS UI and invoke the function. 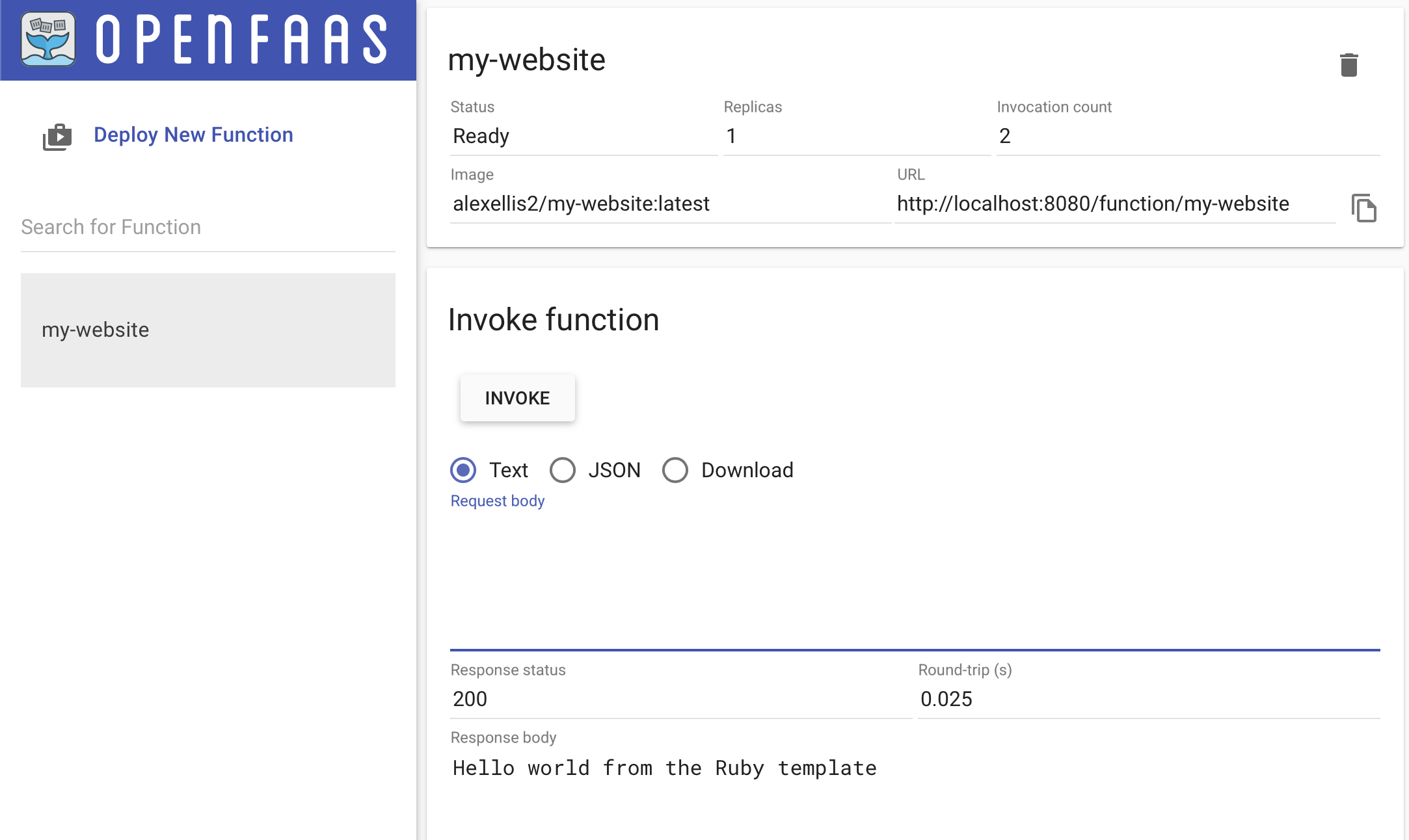 You can also invoke it via curl:

You can also run faas-cli describe to view alternative URLs for the function and to read its metadata.

You can invoke any OpenFaaS function asynchronously without having to add additional software such as resque or Sidekiq.

Now invoke the function and inspect the returned content type, you'll also see the HTML rendered in a browser. 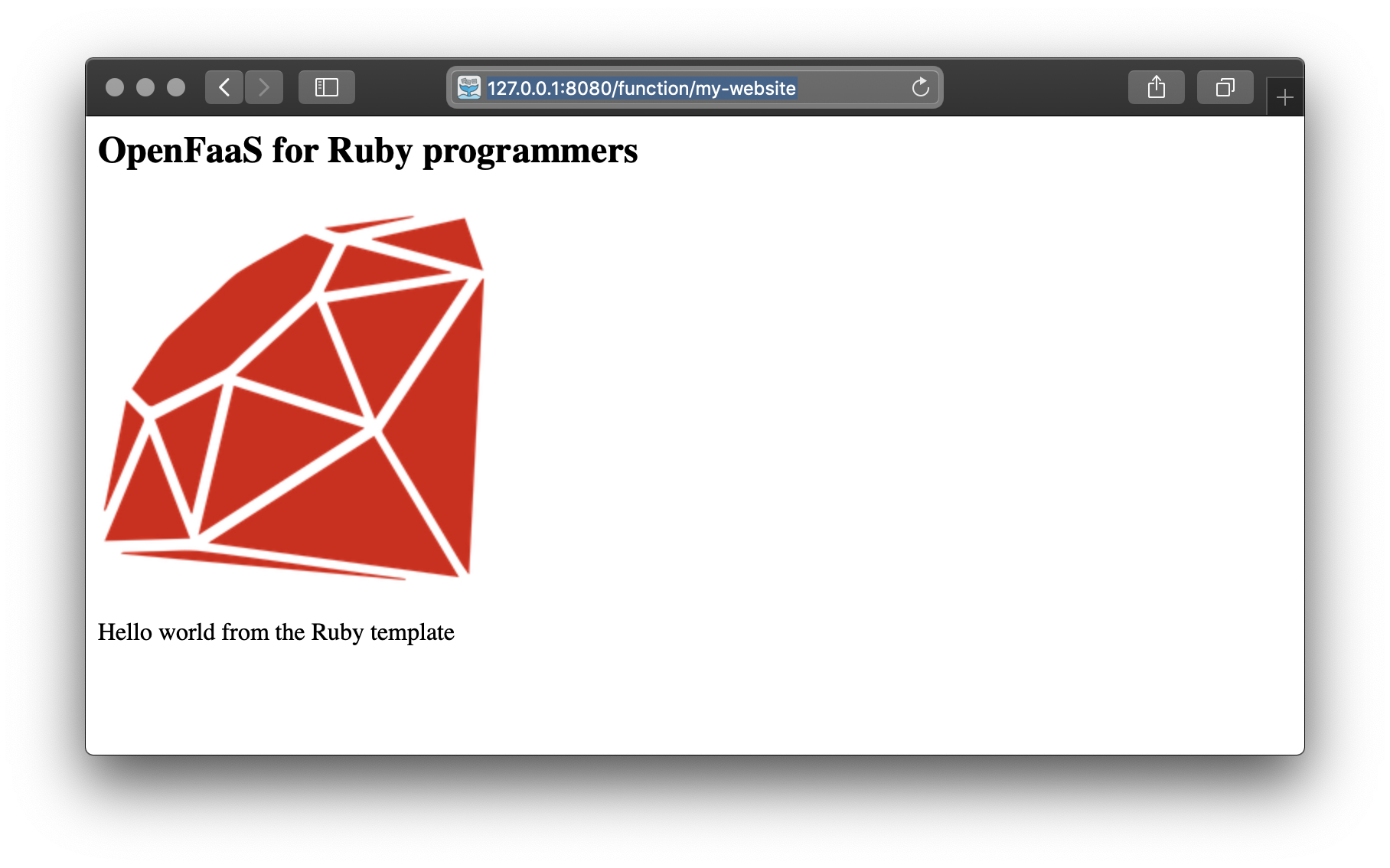 Use your favourite gem

We'll now write a new function to print the title of an RSS feed.

Now we need a couple of gems, so let's update our Gem file so that the Docker build knows what to do.

I've set the URI of the feed to be configured at deployment time in an environment variable. We can set these via the YAML file.

Note: remember to update image: to include your own Docker Hub username

What could you do with the RSS feed? How about building a pretty-printer that outputted HTML for each entry?

We've now built and deployed an OpenFaaS function using Ruby to render plain-text, JSON, and HTML. We've also made use of Gems, so it's now over to you to continue learning and then to go on to build something awesome.

OpenFaaS is built in the open by a community volunteers, if you'd like to contribute, the best way to start is by joining Slack. We would love to have more Ruby programmers in the community and to improve the developer-experience.

Above: OpenFaaS has built-in auto-scaling and detailed metrics, meaning that you can build your own dashboard to monitor your Ruby functions and microservices

You can find out about the OpenFaaS stack in the docs

I also put together short set of labs for the team at Civo.com using Ruby: Ruby workshop for Civo, you can use it to learn about secrets and authentication.

Get in touch via Slack or Twitter and show me what you've built. 👑

Getting Started with the PLONK Stack

You've heard of LAMP, JAM, and MEAN, but what is the PLONK stack? And why should you be considering…

Webhooks... Great when you can get them.

There are traditionally two ways to get data from third-party systems: polling and pub-sub. In a polling method, your…