A little over a year ago I started an experiment to see if I could build an OpenFaaS provider for containerd that would mean a computer could run OpenFaaS functions without the need for a cluster and Kubernetes.

Thanks to some help from @_AkihiroSuda_ 👨‍🏫 and networking expertise from @bboreham 👑, I now have a working @containerd provider for @OpenFaaS 🚀

Trying it out on my Mac with multipass from @Canonical

It's early work, but super fast and lean vs. k8shttps://t.co/RPHVX2QnQH pic.twitter.com/fBkq1IkwqO

faas-containerd is now part of the faasd project, which brings the OpenFaaS experience and ecosystem to containerd.

Learn more about faasd, or continue reading for the original story.

Let's start with a quick glossary then get into the detail.

Since my initial attempt went on hold, k3s arrived and has dramatically reduced the memory footprint of Kubernetes and even enabled the single-node use-case even further. k3s does so many smart things like replacing etcd with sqlite and packaging all the code needed into a single binary, including a network driver.

k3s is positioned for the edge, but it does need 500MB of RAM to even run hello-world, that feels like way too much, that's where faas-containerd comes in.

OpenFaaS was originally built only for Docker Swarm and was tightly coupled to its API, so when requirements changed I extracted an interface called "faas-provider", which is now a Golang SDK and has been used by dozens of developers to build different providers for functions. Read more about The Power of Interfaces in OpenFaaS.

A provider implmements: CRUD on functions, secrets and logs. Functions are simply containers that serve traffic on port 8080. For bash, CLIs and other binaries, our "watchdog" can be used as a shim.

In this post I'll introduce you to faas-containerd, what it does, and how you can get involved. First of all, a bit more context.

Here's a summary from the OpenFaaS community.md file. Not all providers are "equal" in terms of features, and support so we've included some notes and grouping.

Official providers developed and supported by the OpenFaaS project

What's the role of a provider?

The OpenFaaS gateway hosts a UI and adds some important middleware like metrics, scale from zero, and authz. The provider deals with function CRUD, logs, and secret management.

The simplest example is the faas-memory provider that I worked on with Ed Wilde. It's useful for testing.

The idea with faas-containerd is to create a provider that can run any OpenFaaS function or service using containerd, but faster and using less resources than Kubernetes or k3s.

Some users could benefit from a lightweight, single-node execution environment. Using containerd and bypassing Kubernetes or Docker should reduce the start-time for functions and allow for running in resource-constrained environments.

I was excited to share a Tweet showing the provider working with faas-cli and unmodified functions directly from the Function Store, a good test I think. 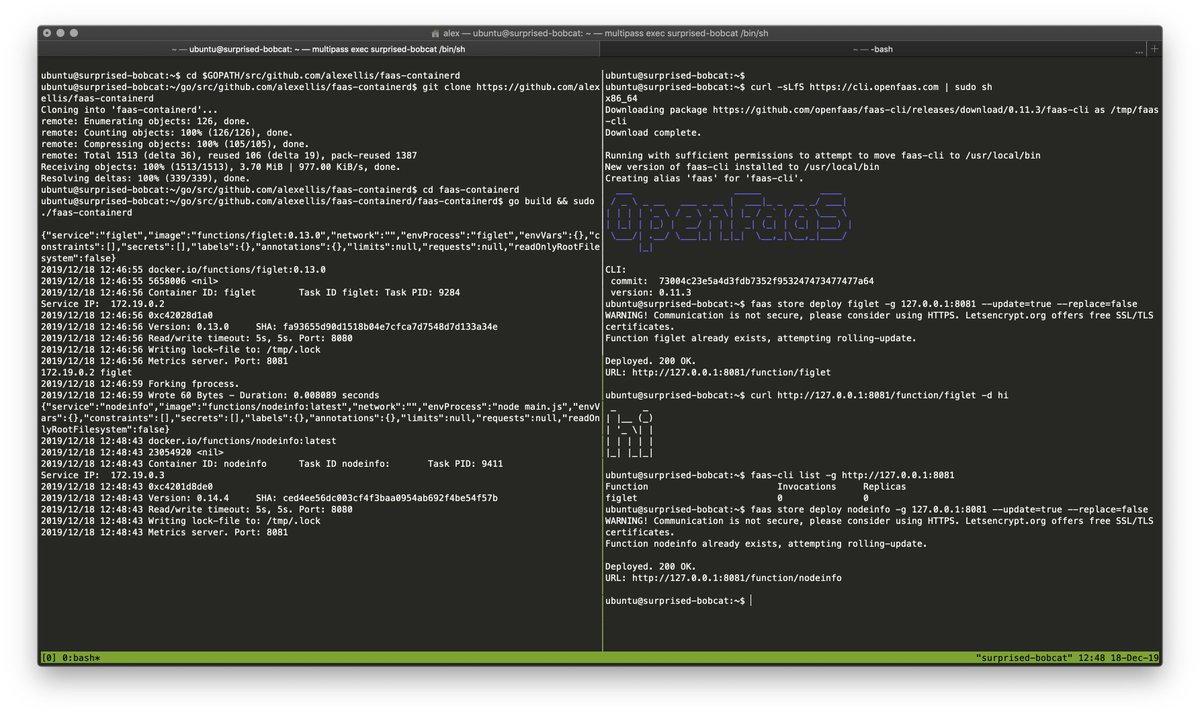 What are people saying?

There's already been some initial interest from my network.

Here's our first tester, tweeting a picture of his deployment of my ping function:

@alexellisuk one more time, just awesome, check i deploy in @CivoCloud and work nice, and i ask, in theory i can run this in k3s? pic.twitter.com/3z46mhyqWe

Oooohhhhh! Me likey the sound of this! 🤤

Darren Shepherd, the creator of k3s also had some ideas about the project

This makes way more sense to me than FaaS on k8s. I'd even go as far as embed containerd in openfaas. Just make it a single executable.

Darren's done great work with k3s, and I'm sure there's a lot that can be learned from his approach.

faas-containerd has generated some initial interest and the proof of concept is working, so you can take it for a spin yourself on a Linux computer, or even a Raspberry Pi.

If you like this idea, or think it's cool, Star / Fork the project for later:

Here's a diagram of what things might look like, if a "faasd" process was used to package and deploy everything needed: 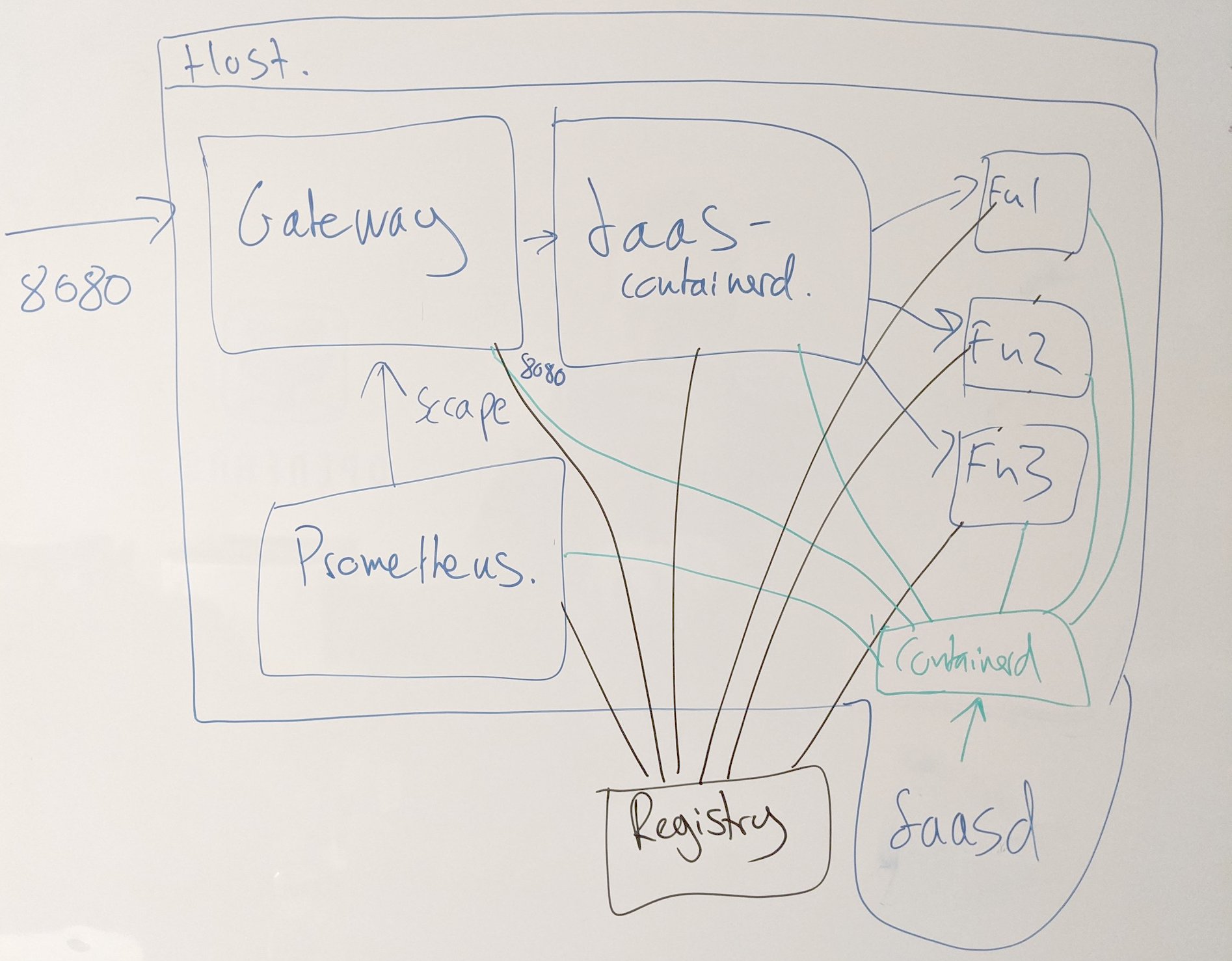 My wishlist now is to:

I'm looking for contributors who can help me with code contributions. It turns out that low-level systems programming with containers is not well documented, but it can be learned through experimentation, which is what I've done here.

If you can help with features, improvements or testing, then please join OpenFaaS Slack.

I wanted to highlight a few similar projects for lightweight multi-node clustering. These are alternatives to Kubernetes, but you may not want to move prod there any time soon.

Both projects have some simularities and Michael/Evan are contributing to each other's projects. Guys, if you're listening, thank you for containerd :-)

Tiny provider for a tiny devicxe

It even works on Raspberry Pi / armhf / ARM64 thanks to Golang's cross-compilation ability and the current state of dependent projects like OpenFaaS, Prometheus, NATS, and containerd itself. Given how light-weight this is, it may even open up the possibility of using the dozen of Raspberry Pi Zeros I have in my spare parts box.

I started a new OSS project over the holidays last year, it was a side-project and not meant to…

Up until recently, running OpenFaaS has meant either your platform engineering team running a Kubernetes cluster, or making use…