In this post I'll explore how I was able to introduce the idea of interfaces to OpenFaaS to allow the project to adapt with the changing container landscape. You'll learn how to extend OpenFaaS through the provider model and faas-provider SDK. I'll then walk you through why we built the faas-cli generate command, what it does, and how you can use it to generate CRDs for Kubernetes.

Introduction to the OpenFaaS Architecture

In the beginning, there was OpenFaaS, and OpenFaaS ran on Docker Swarm.

Four months later a need arose to also target a container orchestration platform named Kubernetes, which was growing in traction and industry adoption. Looking back, it's hard to imagine that Kubernetes was not always the winner of the container wars.

At the time, the OpenFaaS gateway and Swarm implementation of the API interface were tightly coupled.

So I split the existing REST API of the OpenFaaS gateway into three components - a gateway, a provider interface and faas-swarm. The idea was that a provider could target any container orchestrator and understand how to do CRUD, scaling and invoke without changing the interface or tooling. This meant that the gateway component didn't need to get bloated-up with big dependencies like those in the Kubernetes client-go package and it meant that we could follow Single Responsibility Principle (SRP) more closely.

From here on out the OpenFaaS Gateway would only be a middleware for configuration options like auth, tracing and metrics.

Today, a Golang SDK exists to allow anyone to bootstrap an OpenFaaS provider - you just fill in the "http.Handler" functions, which simplifies the whole experience.

A team lead by Alex Boten at OpenDNS, created their own OpenFaaS provider in less than 24 hours.

Here's an example of the in-memory provider made by Edward Wilde.

You can see that we effectively set up our handlers in the bootTypes.FaaSHandlers struct and then run bootstrap.Serve to start up the provider.

By following the provider model, any container orchestrator or other system such as an in-memory store can be targetted and the whole OpenFaaS ecosystem remains available and compatible.

To keep providers compliant, we introduced the certifier project which runs at build-time for the Swarm and Kubernetes providers to make sure they support the API interface.

When Nic Jackson from Hashicorp started the faas-nomad provider, he used this tool to do a kind of test-driven development.

An exception to the rule: Operators and CRDs

At KubeCon, Austin in 2017 Stefan Prodan and I were discussing the merits of rebuilding our Kubernetes provider called faas-netes, as an Operator with its own CRD named Function.

Shortly after that Stefan put together a working Operator using the code from the faas-netes controller, it worked and it now means that users have a choice. They could use the REST API or the CRD, in fact they could use both. The REST API created CRD entries.

We already had an eco-system of OpenFaaS providers and back-ends for different container orchestrators such as: Docker Swarm, Kubernetes, AWS Fargate and Hashicorp Nomad. This meant that we now had two orthogonal ways to deploy functions in OpenFaaS.

All the existing providers used the stack.yml file and REST API, but the OpenFaaS Operator now had a CRD in addition to that. 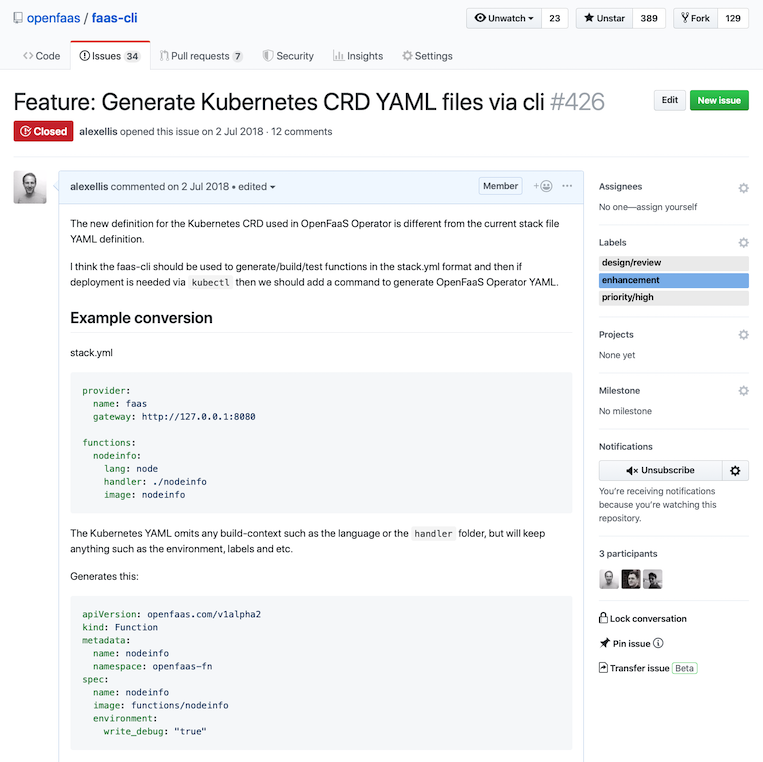 Imagine we have a function called webhook-responder which receives HTTP messages and then sends a message to an incoming webhook URL in Slack.

It would look like this, and because of our faas-provider interface, we can deploy it to any compliant OpenFaaS provider.

We can deploy this function with faas-cli deploy or faas-cli up.

For Kubernetes operators and developers, using a REST API provides some value, but at heart, we prefer our favourite tool named kubectl. The kubectl tool allows for native Kubernetes policies and a deep integration into RBAC and other tooling.

The solution I proposed was to create a generate command which would take a stack.yml file as input and then generate a CRD. Here's what it looks like in action:

Note: you can run faas-cli generate --help for more options.

This function can be deployed with: kubectl apply -f webhook-responder.yaml.

If you'd like to see how faas-cli generate works, then check out the command file here: generate.go. The original version was written by Vivek Syngh from the community.

In Summer 2018, Google announced a new Serverless project called Knative. Right away I set about evaluating the new entrant to the already saturated market and found that any function built with OpenFaaS could be deployed, unmodified to their platform.

The OpenFaaS Function Store allows the community and end-users to share, discover, and collaborate on functions.

In my gist I showed that functions from the Function Store could be deployed to Knative. This inspired Michael Hausenblas, developer advocate at RedHat to show the colorise function in his first Knative blog post.

Just before the Serverless Practioners Summit (SPS) for KubeCon Barcelona this year I set about updating the faas-cli to generate the Knative serving definition.

Here's how it works:

You can even pipe this command to kubectl apply, and it even works if the stack.yml file contains multiple functions.

Then deploy a function from the store to Knative, such as figlet, to generate ASCII logos:

The OpenFaaS provider model and its REST API has meant that the project can target a wide range of container orchestrators, even proprietary SaaS products like AWS Lambda, without any additional changes to the interface.

The faas-cli generate command also offers us a way to integrate deeply into the Kubernetes current and future ecosystem without leaving behind the original design.

You may be wondering if the OpenFaaS REST API and the CRDs for OpenFaaS on Kubernetes or Knative are orthogonal to each other? This may be the case, but the OpenFaaS Operator shows that we can have the best of both worlds.

This design works because OpenFaaS targets the Docker or OCI-image format and a simple HTTP interface on port 8080. I call this the "Serverless 2.0 runtime contract" or "a Serverless workload". 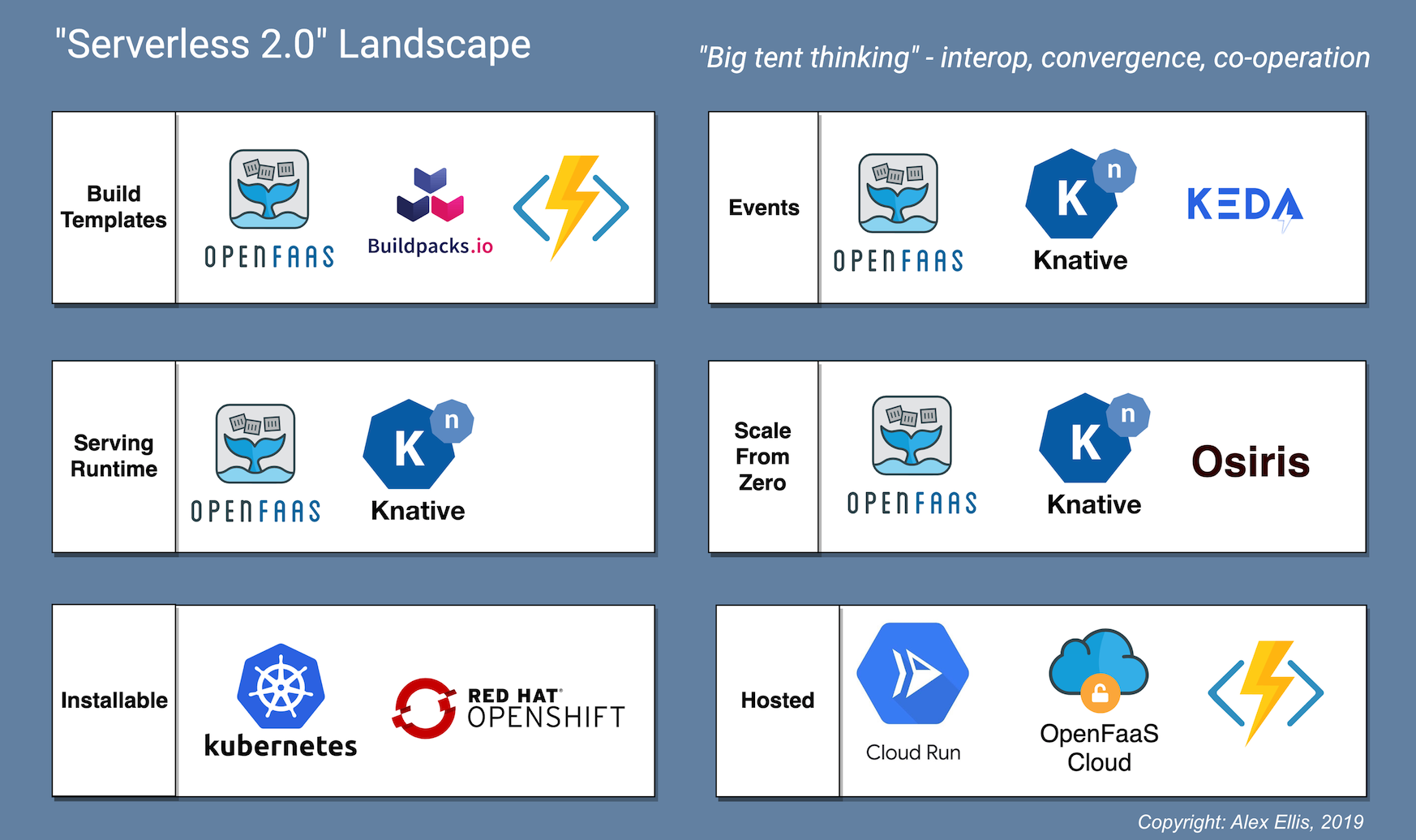 In a Serverless 2.0 world, you can build your functions in any of the listed template systems, and then run them on any of the chosen serving platforms and listed installable or hosted infrastructure offerings.

My other related work:

The mission of OpenFaaS is to: Make Serverless Functions Simple. So the future work as I see it, is to expand the OpenFaaS provider and CRD ecosystem, so that the developer experience can be brought to all platforms.

In 2019, our community is doubling-down on the Kubernetes ecosystem targeting: performance, security and enterprise features. We're also going beyond Kubernetes with faas-lambda. Edward Wilde spoke at the SPS event on how he created a faas-provider which deploys to AWS Lambda directly, with no additional modifications to images built for OpenFaaS. Subscribe to the blog for more.

Here's some of the future work for the community, as I see it:

With a strong core-team and over 200 contributors, there's never been a better time to get involved with the project. Contributions and feedback are welcomed, along with any other questions or comments you may have.

Not sure how to contribute? Join Slack and then get up to speed with our latest community video briefing: How to Contribute, 2019

I'm excited to join the CNCF Ambassadors group. Find out what the CNCF does, why this group exists and how I can help you with Cloud Native technology.…

Colorise your cat pics with Serverless!

In this short tutorial I'll show you how to turn any black and white photo into a colour image using a pre-packaged Machine Learning model and OpenFaaS.…