I'm excited to say that Docker for Mac is now shipping with support for both Docker Swarm and Kubernetes built-in. Let's take a look at what this means, a brief history of developer tooling and then cover my first impressions as I kick the tyres. 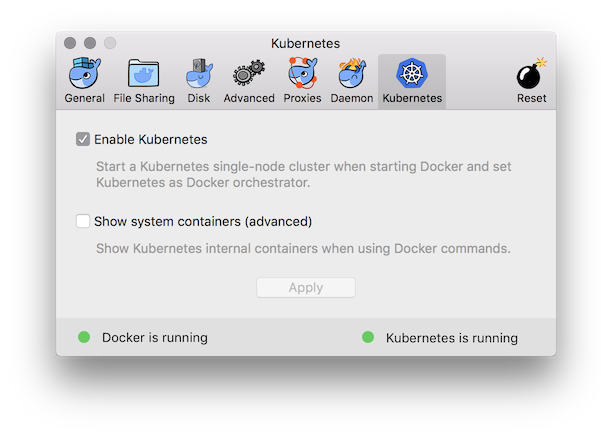 Why does this matter to developers?

Docker CE (nee. Docker) is a piece of software which has brought the benefits of containers to the people (democratisation) and made them extremely easy to use and valuable (commoditisation). This has been a journey and we didn't start day one with Kubernetes support in Docker for Mac, so let's look at the context:

Containers (which normally means Linux containers) were not available on Windows or Mac when Docker began its story as a spin-out from DotCloud.

Here's a a brief history of developer tools and how they brought Linux containers to Mac and Windows users:

Before any of this tooling someone on a Mac or Linux computer who wanted to access Linux container would have needed to have installed a Virtual Machine host such as VirtualBox or VMWare Workstation/Player. They would need to install a Linux host manually and then set up shared folders. Sometimes people also use vagrant from Hashicorp to provide a consistent CLI between VM host software.

Use when: none of the following options work for you. This option is not recommended.

Docker Machine was the next step in the tooling evolution. Docker Machine automated the setup of a virtual machine on a local or remote environment and made use of standard ISO images (boot2docker) plus a writeable disk area. This also meant upgrading from one version to another was easy.

Once the VM was running SSL certificates were generated and then the Docker client accessed the remote or local VM over TCP/IP. It could support multiple-concurrent Docker versions or hosts at the same time for clustering.

Use when: you're on Windows 7 or Windows 10 Home or need a cluster of machines on your local computer. Or you're creating/managing a remote cloud cluster.

The problem with Docker Machine was that it involved too many manual steps (docker-machine env etc) and configuration sometimes needed to be regenerated for TLS. Docker for Mac/Windows or DfM was pitched as a "native" integration which meant it came with a UI and a menu-bar that was hugely popular. The initial release of DfM was through a limited beta and there was a big demand on Twitter for it.

Use when: it's available to you and you need Docker Swarm or Kubernetes support for local development.

Minikube has a very similar user-experience to docker-machine and also relies on boot2docker. Its primary purpose is to create a single-node Kubernetes cluster which also includes a Docker host that can be used for development. 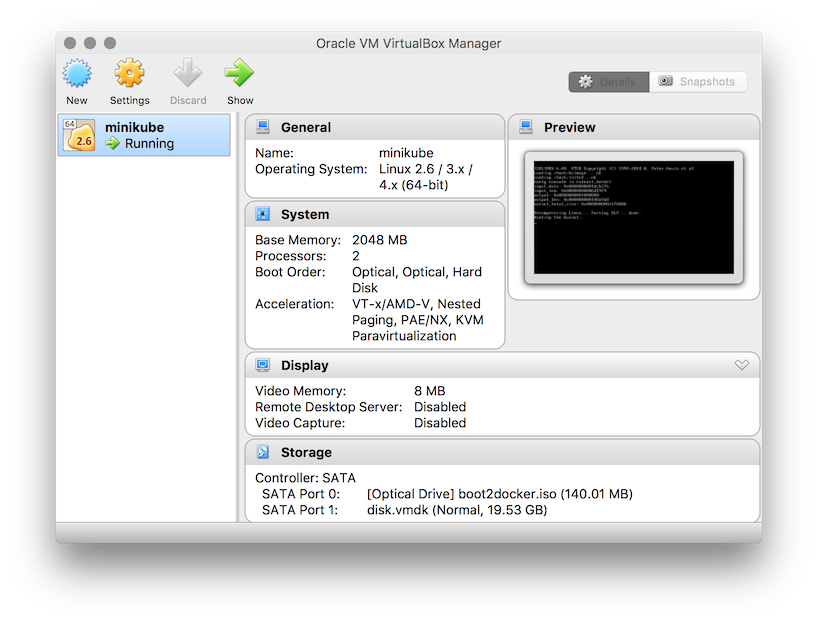 Example output of starting up minikube on my Mac:

Use when: you need a local Kubernetes environment but don't mind if the Docker version is older.

To summarise the tooling there are pros and cons to each option. Let's move onto my first impressions of Kubernetes on Docker for Mac.

Here are my first impressions through getting hold of the update, kicking the tyres with an application and seeing what the Docker "stack" integration is like..

You currently need to be on the "edge" track of Docker CE in 17.12 or greater to get Kubernetes support. The support is then downloaded via a UI option and this can take several minutes.

If you've ever installed minikube then you'll have to switch out of that context into the DfM context otherwise kubectl will hang.

If you find that too verbose to type in then the Kubernetes community has a tool called kubectx that make that shorter.

One of the other key differences between Docker Swarm and Kubernetes is the support for namespaces. By default parts of the Kubernetes ecosystem run as containers in a hidden namespace called system.

To view all containers running type in kubectl get all --all-namespaces: 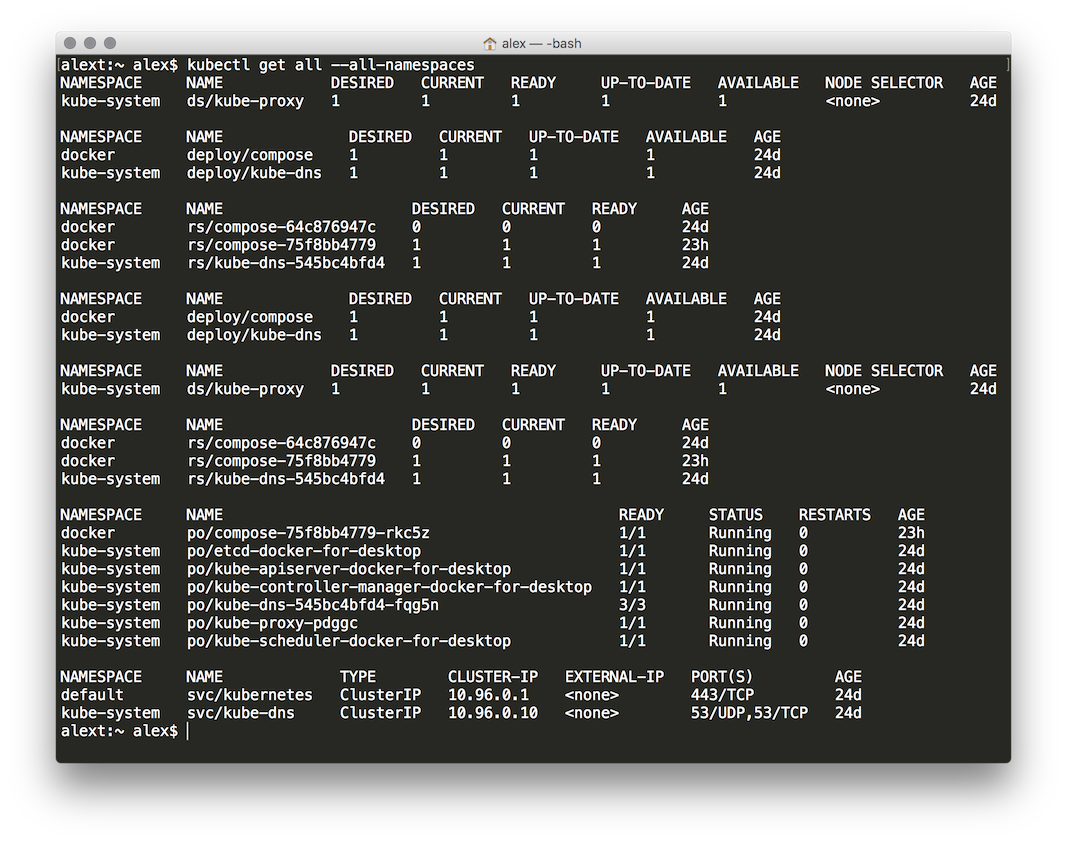 You'll see that a lot of services are running by default. This is in effect the same as what is running for Docker Swarm, but it's hidden from you and baked into a few fixed binaries rather than being split out to this degree.

Let's check which version got shipped?

Looks like we get 1.8.2 which is not the latest but does include all the most important features.

Docker is attempting to make Kubernetes easy to use for Docker Swarm users by creating an integration between Docker stacks (as seen in Swarm) and Kubernetes native deployments/services.

Kubernetes is by nature extensible and Docker are using Custom Resource Definitions (CRDs) which add a "stack" concept. It means you can do this:

Let's try a Docker compose file I have and see what happens:

And it appears to have created some Pods:

Prometheus has an issue that I can debug by typing in: kubectl logs pod/prom-76b4f584f7-qckc9.

Take away - if you're still using docker-compose for development or production - you can probably move straight to Kubernetes and enjoy the benefits of clustering.

So for a native workflow we'd expect a few things:

Let's try to deploy OpenFaaS - Serverless Functions Made Simple for Docker and Kubernetes.

If you run into an error about namespaces then type in kubectl apply -f ./namespaces.yml in the faas-netes folder and try again.

This is a good test because OpenFaaS will display a UI at localhost:31112 and also uses both RBAC and two namespaces (openfaas / openfaas-fn).

We see no errors:

The services are created too. See them by typing in:

Now open the UI and deploy a function using the store:

Kubernetes uses more primitive objects to make up a "service" than Docker Swarm. Find out more about Kubernetes fundamentals below.

Now invoke the function and see the result:

It works very well and was really easy to deploy. This will help the community maintain and build the Kubernetes integration for OpenFaaS.

I said we'd need helm to work too, which is a package manager for distributing software like OpenFaaS, Minio or similar. The equivalent doesn't exist for Docker Swarm.

Just setup #kubernetes on the @Docker for Mac beta and did a #helm install... this is so so great!!

One of the key advantages of having this new support in Docker for Mac is not the stacks integration - it's the simplicity, speed and ease of use over existing tools. I believe a portion of existing Docker Swarm users will make use of the stacks integration and it could be a useful upgrade path for them if they decide to move to Kubernetes.

Is Docker Swarm dead? I don't have any inside information as a member of the Docker Captains group, but what I've been told generally is that while there is a customer-base for Docker Swarm it will continue to be supported. For example the original Swarm that ran as individual containers is still supported by Docker's UCP product.

If you read the developer reactions on Hacker News
you'll see Swarm still has its fans and if Kubernetes wants to convert them then my impression is that installation/maintenance for on-prem installations needs to improve.

So as for my first impressions - it's great and everything I was expecting to work does. I'm really impressed with what Docker has done with Docker for Mac and the internal components that make it up like LinuxKit.

I highly recommend reading the differences between Docker Swarm and Kubernetes - even if you're a Kubernetes veteran, this blog post may be useful for your colleagues and friends:

"Docker Captains are experts and leaders in their communities who demonstrate a commitment to sharing their Docker knowledge with others."

I've spent many hours playing with both 32-bit and 64-bit ARM System-on-Chip (SoC) boards, so you may be wondering…

5 keys to create a killer CLI in Go

We're having a renaissance of CLIs - every programming language from Node.js to Go to less fashionable ones…