Yes, you read it correctly. In this post I'll kick the tires with and walk you through how you can use the world's first managed k3s service. k3s is a light-weight distribution of Kubernetes re-packaged by Darren Shepherd, Chief Architect at Rancher Labs.

I'll introduce you to Civo and how the idea came about. Then I will show you how to use the platform to setup a 5-node cluster with OpenFaaS, cert-manager, metrics-server, Minio, and persistent storage, all within a few minutes. At the end of the post, I'll wrap things up with a quick summary and show you how to get involved.

Disclosure: Civo is a client of OpenFaaS Ltd

How did this all start?

It all started when Civo Cloud based out of Stevenage in the UK asked me to help them think through what a managed Functions and Kubernetes service would look like and what they should prioritize first. I advised the team to build their Kubernetes service first, and that a Functions platform like OpenFaaS or OpenWhisk could be hosted on it at a later date.

The team had been using Kubernetes to run their own platform for several months and had previously drawn-up plans to build a managed offering with the classic HA control-plane and hidden master. Whilst deep in discussion about IP subnets and networking drivers, their CTO Andy Jeffries asked a question:

That's where it all started and since then I've worked with Civo as a consultant and Cloud Native coach through OpenFaaS Ltd. I gave regular feedback and advice on the developer experience and design. I've been impressed by the speed at which the team has delivered a functioning product with a simple developer-experience. The team are now seeking input from the community and have launched an early access program.

Civo are giving early access to a limited number of developers through the #kube100 program. Participants of #kube100 will get a swag shipment from Civo HQ and enough credit to run a 3-node cluster for free for the duration of the program. 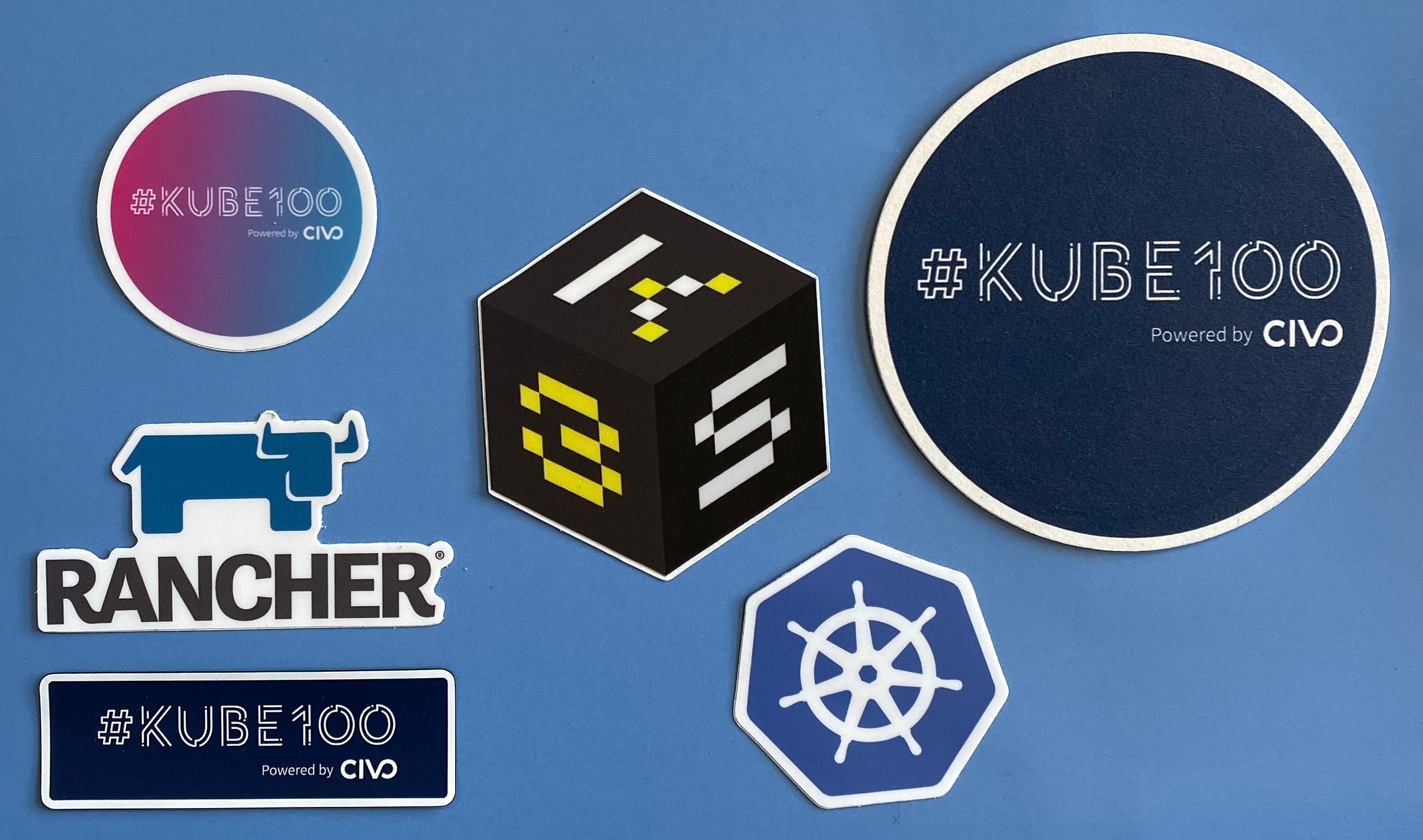 There are three ways to create a cluster: 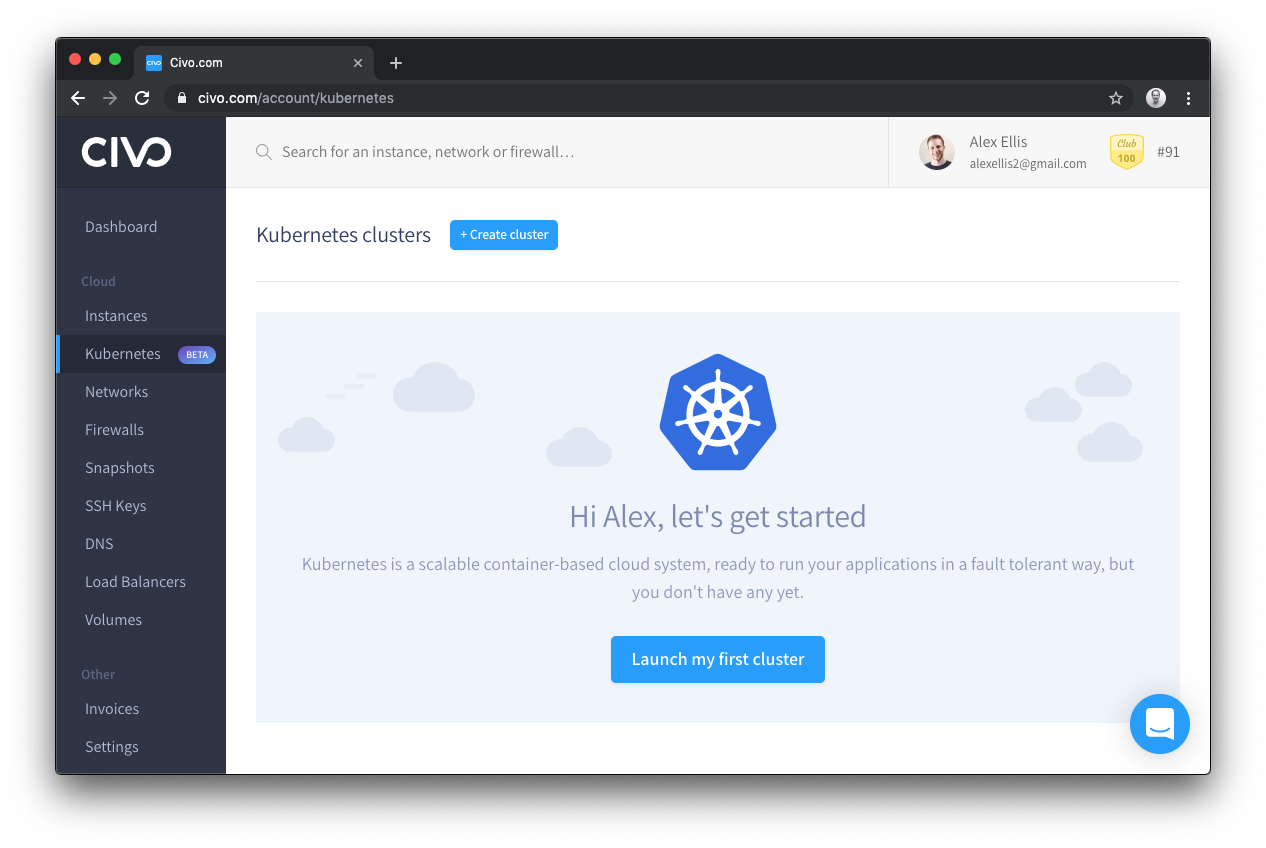 I was greeted with a friendly welcome page

On this page you first select how many nodes you'd like, what to call the cluster and how much memory/CPU you'd like to have for each node.

The cluster can be scaled at any time to add or remove nodes.

You can now select which applications you'd like to have pre-installed from the Civo Marketplace. Each application is added through pull-request on GitHub.com in the k3s-marketplace repo. 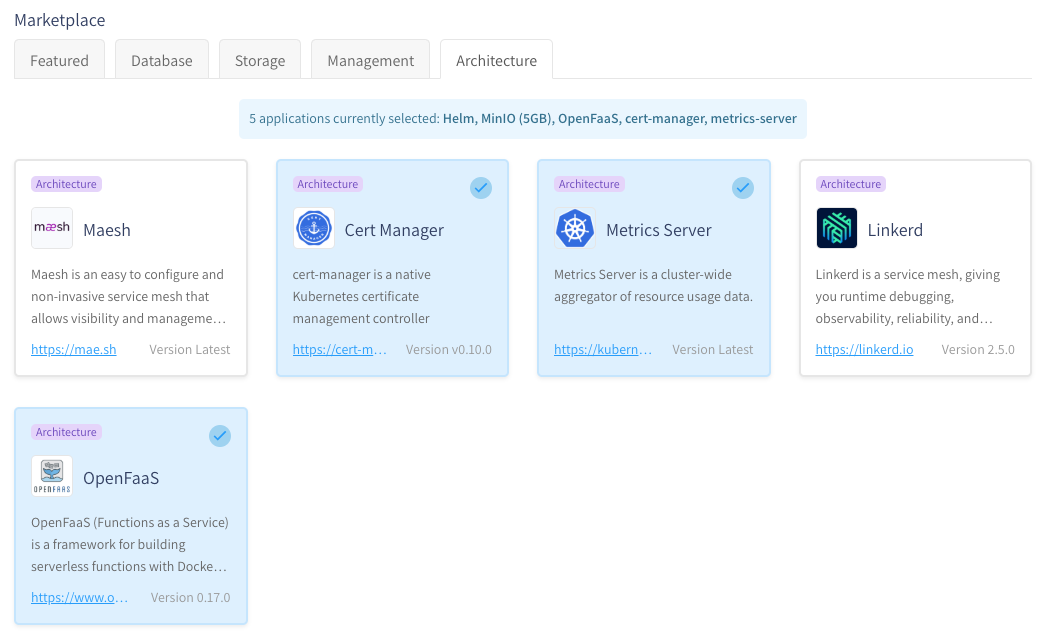 Your cluster will now take between 1-2 minutes to provision and then you can get hold of your KUBECONFIG and start deploying your code.

Whilst the cluster is spinning up, I wanted to mention the third-way to create and managed clusteres: the Civo REST API. You can find API documentation with examples showing curl, Node.js and Ruby. As a #kube100 participant, you can access this via https://www.civo.com/api/kubernetes.

The first version of the API includes:

The Marketplace for "applications"

Before writing this post I submitted PRs to add: cert-manager, openfaas, and metrics-server. I found the experience relatively straight-forward, it involved writing a YAML file and a shell script.

Here's what I wrote for OpenFaaS:

Civo added a templating language which allows passwords and other configuration to be generated at deployment time.

The script is almost a 1:1 reflection of the OpenFaaS helm chart instructions, which will make maintenance relatively easy.

You can also supply a markdown file which is displayed to users after they have installed your application.

The cluster status is shown whilst it is being built and then the same page shows the applications added and how to access any passwords or generated configuration.

Each node gets its own IPv4 IP-address and can be accessed via a DNS record which has round-robin configuration for each IP.

This is especially useful because there is currently no Kubernetes LoadBalancer integration available for Civo yet.

Traefik comes pre-installed as your IngressController, so you can create a CNAME for the "DNS Name" to match your own domain name such as openfaas.on-k3s.dev

We can also view the status of the applications which we've installed and view the post installation guide. 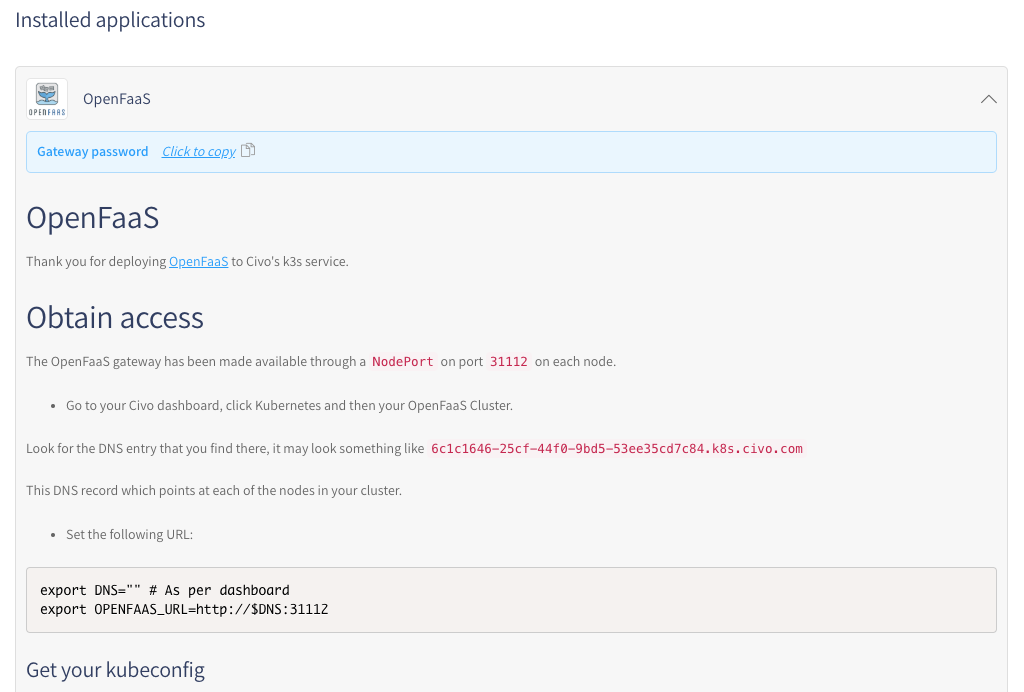 I loved the way that the login password for OpenFaaS was only one click away at all times. I can just log into the dashboard and click on the application to copy it to my clipboard.

Any values which are templated at installation time will appear pinned here. I don't know if you've ever had to go searching for a command to retrieve your Postgres password from a helm chart? I have. This makes for a refreshing developer experience.

Remember that I also installed Minio?

With every managed Kubernetes service there are normally two ways to get access a KUBECONFIG file and kubectl.

Civo's k3s is no different. You can download the KUBECONFIG file as soon as the cluster is ready.

You can install the Civo CLI with Ruby via sudo gem install civo civo_cli, then follow the instructions to add an API key.

For the CLI there are a set of commands which the team added for Kubernetes:

Note: the context does not change by default, so use kubectl config set-context to do that.

There are also we useful aliases: civo k3s and civo k8s.

A feature I really liked was being able to type in civo k8s create with no parameters, node sizes or even a name, and to be able to get a working cluster within a minute or two.

See it in action here:

To set up a cluster with OpenFaaS or some other applications, just add --applications to civo k8s create.

Since we installed OpenFaaS earlier as an application, all I have to do is to copy the gateway password and then find the link for the gateway.

So it will be the following: 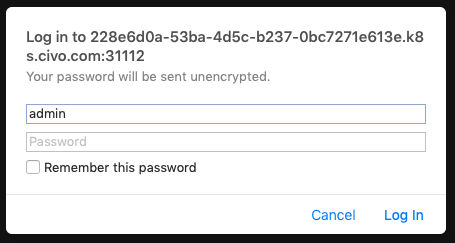 I can also log into OpenFaaS using the faas-cli:

Note the warning on TLS, by default the OpenFaaS chart comes without TLS enabled.

You can add SSL/TLS through an IngressController and cert-manager using this guide for SSL.

Now you can deploy a Function from the OpenFaaS Function Store: 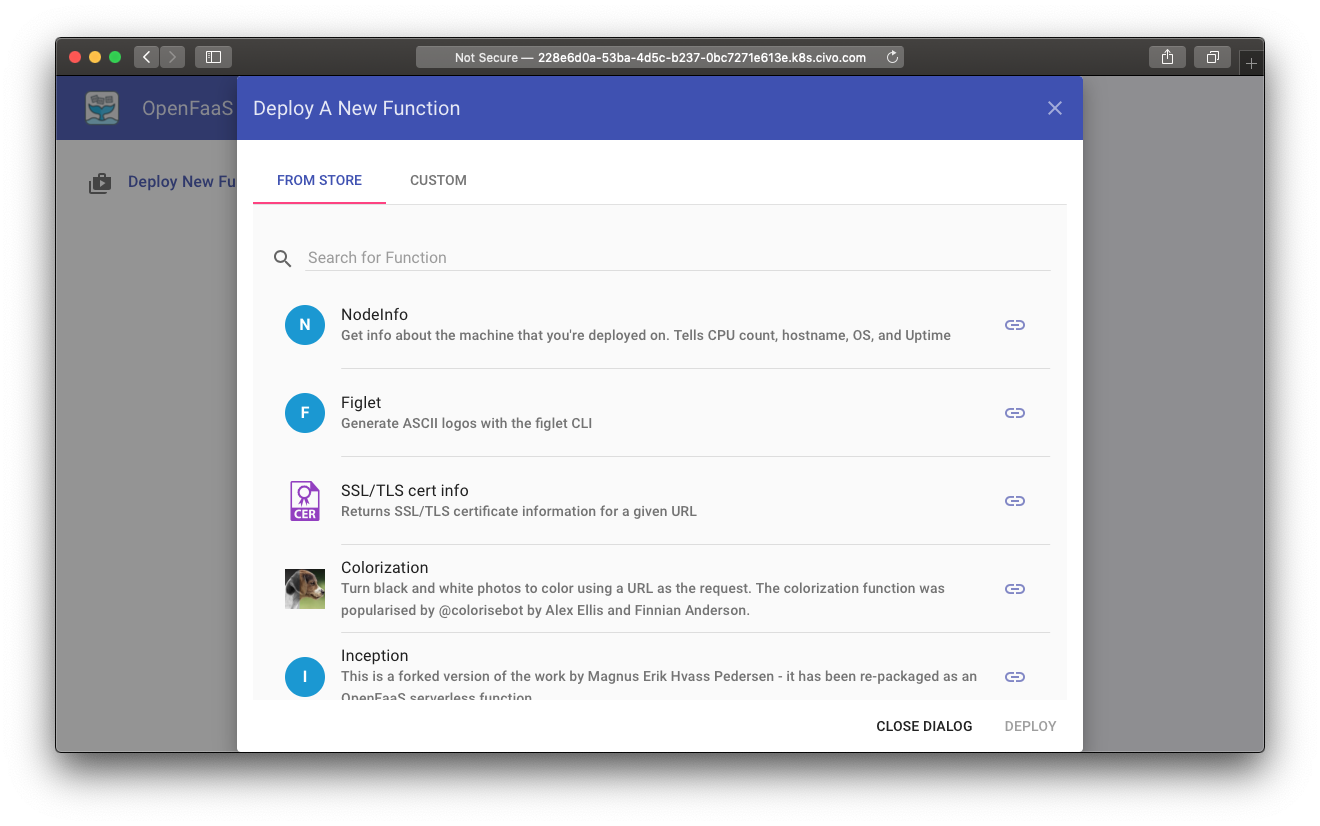 You can pick from a mixture of samples, machine learning models, and utilities. I've deployed the "haveibeenpwned" function

The haveibeenpwned function finds out whether a password was used in a breach. The code is available here and is written with the Go template. 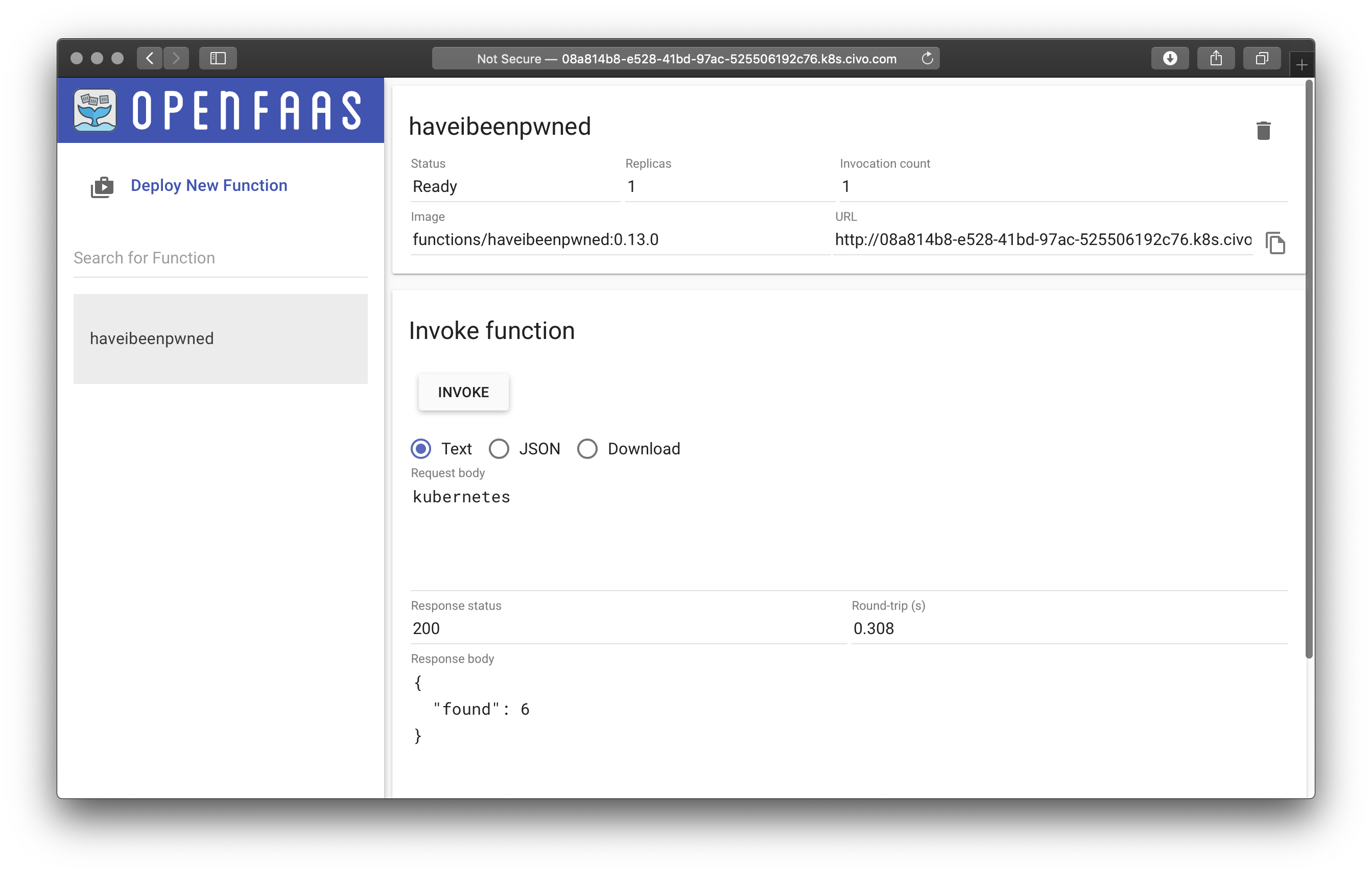 haveibeenpwned showed us that it was only used 6 times. Let's try the same with the command line and password.

Can you believe that so many people actually use password for their login credentials?!

If you'd like to learn how to build microservices, web-pages, and functions with OpenFaaS, then try the hands-on OpenFaaS workshop.

The post install guide that I wrote for the metrics-server application shows how to test and make use of kubectl to interrogate node and Pod usage across your cluster. 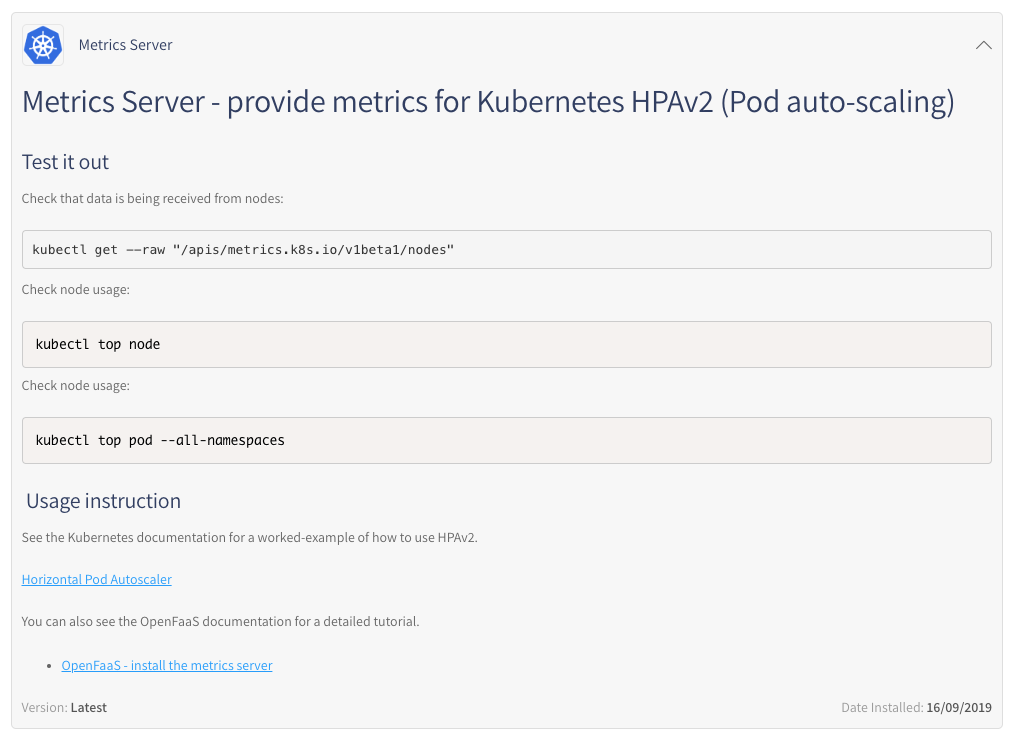 The majority of the workloads we can see were crearted by Longhorn. Rancher's Longhorn project adds PersistentVolume capabilities to k3s.

Can I get TLS for that?

I would like to add TLS to my OpenFaaS installation, so I'm going to create an Ingress record with annotations that cert-manager will respond to and a TLS issuer for the ACME HTTP01 challenge.

I then used kubectl apply -f to create both files and created a DNS CNAME to the record found in the Civo dashboard earlier.

This is what the DNS config looks like with Google Domains:

We can now log in with TLS enabled and have end-to-end encryption for our functions and micro-services deployed on OpenFaaS.

Notice that the insecure warning has now disappeared, and we can now use OpenFaaS with TLS encryption between our clients and our cluster.

Civo k3s clusters can be resized at any time, and providing there is capacity, then your new workloads will be rescheduled in the cluster. The kubectl top node/pod command can help you estimate how densely you can pack the cluster.

Here's how much the cluster will cost me if I resize down to 3 nodes, instead of 5.

Right-sizing can be hard and auto-scaling groups or the Kubernetes Cluster auto-scaler can help here. At time of writing Civo is not supported, but this may be subject to change. I would encourage Civo to add support.

What I do like is that Civo go to lengths to help the user and to explain what each screen does.

You can create multiple clusters and view them on the overview page. For development, you can even create a cluster with a single server node.

The Civo team are pioneering the world's first k3s service and seeking feedback from potential users and customers to shape it and add the remaining features to make it ready for development teams.

This is probably the easiest way to get OpenFaaS up and running on Kubernetes to date and adding TLS with cert-manager wasn't much harder either.

This Hacker News post on k3s shows that developers are very excited about any efforts we can make as an industry to level the barrier to entry for Kubernetes. I think that Civo's work represents a significant move forward in this area.

This post shared my first impressions with you today, but I've been leaning on my sense of developer experience and my experience as a CNCF Ambassador to guide and direct the vision for the k3s service and marketplace.

Here are some items I'd like to see next:

Creating applications for the marketplace was straight-forward and a painless experience, the UI integration is the best I've seen so far. For General Availability (GA), the team will also need to think through the lifecycle problem of updating and removing applications which is not covered yet.

You may have your own wishlist of items, so in the spirit of being fair and impartial, I think that you should sign up for #kube100. Use my blog post as a guide or tour of the features, but test it out for yourself and make up your own mind. I know the team will be keen to hear your feedback on the new Slack workspace and via GitHub.

In the next post I'll use OpenFaaS to build an example Cloud Native app by taking advantage of the applications in the Civo marketplace. Follow me on Twitter @alexellisuk so you don't miss it.

Webhooks... Great when you can get them.

There are traditionally two ways to get data from third-party systems: polling and pub-sub. In a polling method, your…

The Five Pressures of Leadership in OSS