Secret management was added the Docker product in the 1.13.1 release and enables you to use secrets such as API keys, passwords and tokens in your production applications.

In this post we'll look at what is required to integrate a secret into an application. The example is using a token to securely integrate with Github events through webhooks.

You may want to get notifications from your Github repositories or organizations - or you could be building an application around data on Github. You can do this by adding a new public URL to the Settings -> Webhooks page in the Github UI.

When an event you've subscribed to occurs then the Github servers will send an HTTP POST over to your endpoint. An example could be that someone forks your code or submits a Pull Request. 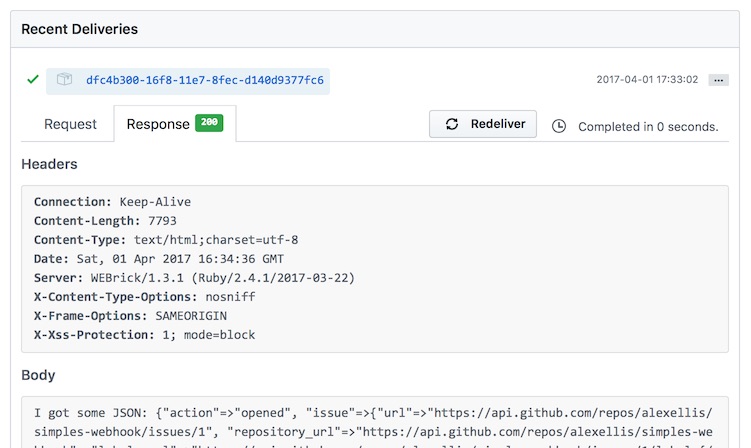 Github has a Ruby code sample that shows how to verify the signature of the incoming web hook against a shared stored in an environmental variable.

The Docker team made a design-decision to avoid storing credentials and secrets within environmental variables. Instead it provides files under the /run/secrets/<secret_name> mount in a tempfs. This means that all existing applications that expect to read secrets from the environment will need to be modified or adapted.

It turns out this is a relatively simple change in the Ruby code:

Here's what we'll need from a Docker perspective:

Docker secrets can be created on the command-line, but a Docker Compose file is easier because we can define the service, secrets and which service can access which secret all in one place.

Note: To use secrets you will need to declare your compose file as version "3.1".

Once the github_responder service is created it will have access to a file called github_webhook at /run/secrets/github_webhook.

A rudimentary webhook responder with no security would look like this:

The Github example is enhanced to read an environmental variable and verify the message is correct. I've changed the code to read the secret created by Swarm:

What's going on in the code?

Github's example doesn't transmit your secret in plaintext, it effectively signs the payload and then because you own the key you can sign it locally and compare the values.

This is better than sending your API-key or secret in plain-text, but does involve slightly more work for you in your application.

For this tutorial we will use a Docker image that I've already published on the Docker Hub. This is the Dockerfile I wrote:

It uses the light-weight Linux distribution Alpine Linux, adds the Ruby sinatra web server package and then the rack package which provides us with Github's Ruby utilities.

Putting it all together:

Head over to Github and create a sample repository and enable webhooks. 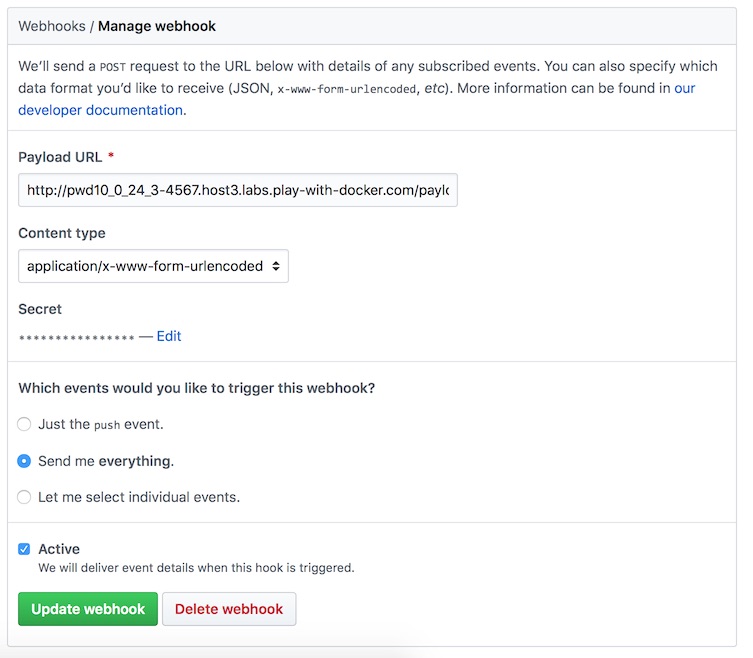 Paste your publicly exposed URL into the Payload URL.

You temporarily publish any HTTP service from your laptop on the Internet with Ngrok.

Make sure the Content-type is x-www-form-urlencoded since the example code expects this format.

Now select which events you want to opt into:

Create your secret and deploy your stack

Now create a file named github_webhook.secret and put the secret in it, so it should be docker if you used the same one as me.

In the same directory create a docker-compose.yml file like below:

For docker stack deploy you can use -c instead of --compose-file if you want to save on typing.

Now you can head over to Github and trigger an event such as creating an issue.

Now you'll see a success message for your function containing the relevant details from the event.

If you want to prove the security works:

You can also revoke a secret at any time with the docker secret rm command.

We've now applied Docker Swarm secrets to integrate with Github events securely. We needed to make a small modification to the sample code, but that was relatively painless.

You can use this approach as a template for your own applications. I'm including some additional resources below.