In the Dockercon closing ceremony I showed off a range of Serverless demos with my Functions as a Service (FaaS) project. In this post I'll talk about one of the Alexa skills I wrote in Golang to integrate with a data-feed collected over the duration of the conference. 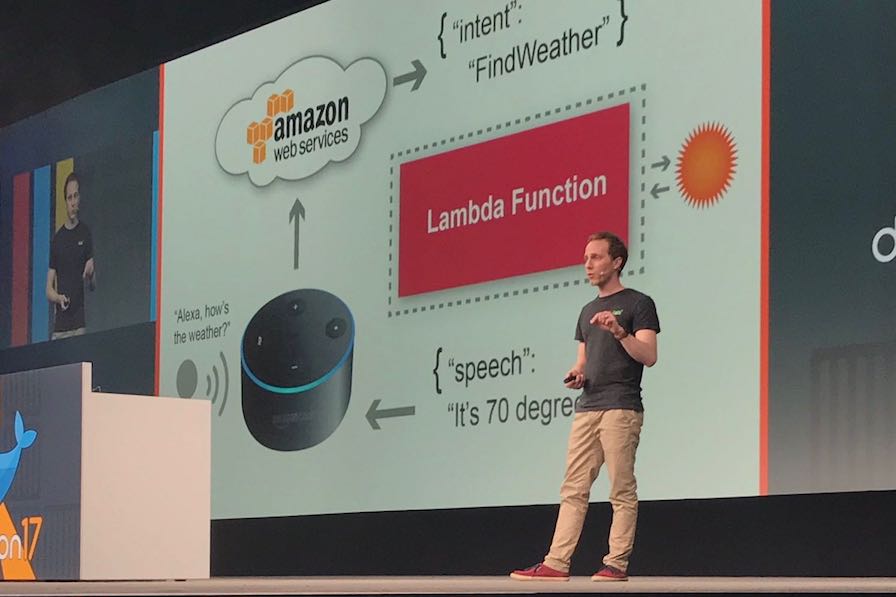 The closing session at Docker's annual conference is Moby's Cool Hacks - which is both a contest and a showcase for outstanding projects.

Every day, we see great new apps that are built on top of Docker. And yet, there’s always a few that stand out not just for being cool apps, but for pushing the bounds of what you can do with Docker.

Once it had been confirmed that my Cool Hack would be one of the contest winners I set about finding ways of relating my demos to the conference. Victor Coisne - the community marketing lead at Docker told me about a program called MobyMingle that would allow people to arrange meet-ups at the event to share knowledge and make new friends.

I was put in touch with the team behind MobyMingle called E-180 and within a couple of weeks they exposed an API for me where I could get statistics back from the MobyMingle program.

I'm going to talk about how I integrated MobyMingle with Alexa to produce a fun demo for my Dockercon demo.

Alexa is Amazon's voice assistant which launched in the UK earlier last year. At the time of writing two "Alexa" devices were available - the Echo and the cheaper Echo dot. For my demo I used an Echo Dot.

In order to add custom code to your Alexa you have to define a new skill which involves three things things:

Note: Amazon will not invoke an endpoint over plain HTTP, this is for security reasons.

On the left hand side we have the "Intent" and on the right hand side we can define any number of voice commands that correspond to it.

Unlike with a regular graphical user interface such as a web-page - there is often more than one way to do something. User Experience (UX) applies just as much to voice as it does to apps and websites.

Here we define the available Intents - there are some default ones provided by Amazon which are used for utterances like "help" and "what can I say?".

In this example none of the intents take a parameter which makes them slightly easier to work with. For an example of an intent with parameters click here to view my Payroll skill (myassistant).

We then have to provide an application to handle requests. All Alexa requests are sent as a JSON body with the Intent and any parameters. They expect a JSON response with the text your Echo should speak out.

I find it useful to keep several of these for testing the handler during development before redeploying it. Here is an example Request and Response.

My Golang code is spread over three files, but is relatively simple.

When parsing the JSON request and constructing the JSON response it's helpful to have a number of struct types available for un/marshaling.

This file abstracts away all communication with the MobyMingle (E-180) service so that we only have one place to make changes.

These are the two functions it contains:

The URLs are hard-coded, but need an access token for authentication. I pass that in via an environmental variable access_token. Given enough time a Swarm secret would be a better option.

This is the glue of the Alexa skill. Any FaaS function operates by reading its request through stdin and writing its response back to stdout that means that FaaS functions do not need repetitive boiler-plate code. Out of the box they can handle web requests for free.

You can find all of the code in the GitHub repository but this is probably the most interesting part - where we tell Alexa what to say back in response:

It's very important to support edge-cases with Alexa skills, otherwise your users will receive a vague error message. In the code above I've made sure unexpected Intents are handled well and the AmazonHelp phrase too (what can I say?).

FaaS functions are packaged in Docker containers. Any process can be a FaaS function if it works with stdin and stdout - that means than even a UNIX built-in utility like cat can be a serverless function.

My Dockercon demo used two separate Dockerfiles to produce a tiny FaaS container image. If you were to set about that task now you could take advantage of multi-stage builds and use a single Dockerfile to achieve the same result.

Three lines make any regular Docker container into a FaaS function. Here's an example of what you could add to the alpine:3.5 image on the Docker hub to create an echo function:

The watchdog sits between an API Gateway and your code and handles all HTTP communication so your code doesn't have to. The fprocess variable instructs the watchdog what process to run for each HTTP request.

One of the advantages of using my FaaS project over AWS Lambda would be that you can write your code in whatever programming language you want and run it on whatever hardware you have available.

So, it turns out you can run #FaaS on a @docker swarm on a PiZero stack in the comfort of your own home. https://t.co/hxuUoc0kXD pic.twitter.com/i2CGuqBxt6

A step-by-step example is available in the FaaS test-drive.

I hope this blog post has given you a flavour of how to put an Alexa skill together for a real-world example. If you'd like to know more about my keynote or how to build an Alexa skill of your own checkout the links below:

You can also read up on multi-stage builds here.

Live stream to YouTube with your Raspberry Pi and Docker

Package Minio S3 as an appliance with LinuxKit

In my previous blog post I wrote how to build, boot and connect to an OpenSSH server with Docker's…