In this hands-on guide we will look at how to integrate Prometheus monitoring into an existing application. Monitoring an application can give you insights into how it is being used and when. More importantly you can also pre-empt potential issues.

Prometheus is a leading cloud-native time-series database and monitoring solution. Pictured above is Julius Volz co-founder at the Docker Berlin Summit.

Looking for the quick-start sample code? Star or Fork it on Github here:

The Role of Exporters

Prometheus is a time-series database with a UI and sophisticated querying language (PromQL). Prometheus can scrape metrics, counters, gauges and histograms over HTTP using plaintext or a more efficient protocol.

One of the most widely used exporters is the NodeExporter. When NodeExporter is run on a host it will provide details on I/O, memory, disk and CPU pressure. You can run the NodeExporter as a Docker container, but it needs so many additional flags that the project recommends you run it directly on a host being monitored.

Prometheus provides its own set of metrics - in effect dog-fooding. This is built-in and is usually configured to be scraped (or collected) by default.

An interesting exporter that was put together around Docker's Berlin summit is the Docker Hub and Github exporter by Edward Marshall. These exporters surface metrics from the Docker Hub or Github sites by querying APIs periodically and then relaying the values.

Ed used the Python client library to put together his exporter, but many other language bindings are available.

One of the first Prometheus exporters I wrote was to monitor Bitcoin mining stats such as how many dollars I'd earned and how many solutions (hashes) per second my equipment was processing.

My Bitcoin exporter is written in Node.js and makes use of the Gauge and Histogram metric types.

Other exporters are highlighted in the docs such as MySQL, Mongo, Redis, NATS, Nginx and JenkinsCI (to name a few).

Building your own exporter

This is where things get really interesting - you can monitor almost anything. Imagine you ran a Shopify store (think: webstore-in-a-box) tracking both sales and order status.

Here are a few ideas for metrics you could include on a dashboard:

Now you may find that this kind of data is already available in which case maybe you just want to track lower-level metrics:

Let's first look at a simple Prometheus recipe with Docker and then come back to writing our own instrumentation for a sample app.

Getting Prometheus with Docker

Prometheus is written in Golang and can be consumed as single statically-compiled binary with no other dependencies. The project also packages up the binary with a sensible configuration in a Docker container.

Let's define a Docker Compose which will let us keep our command-lines simple and repeatable: 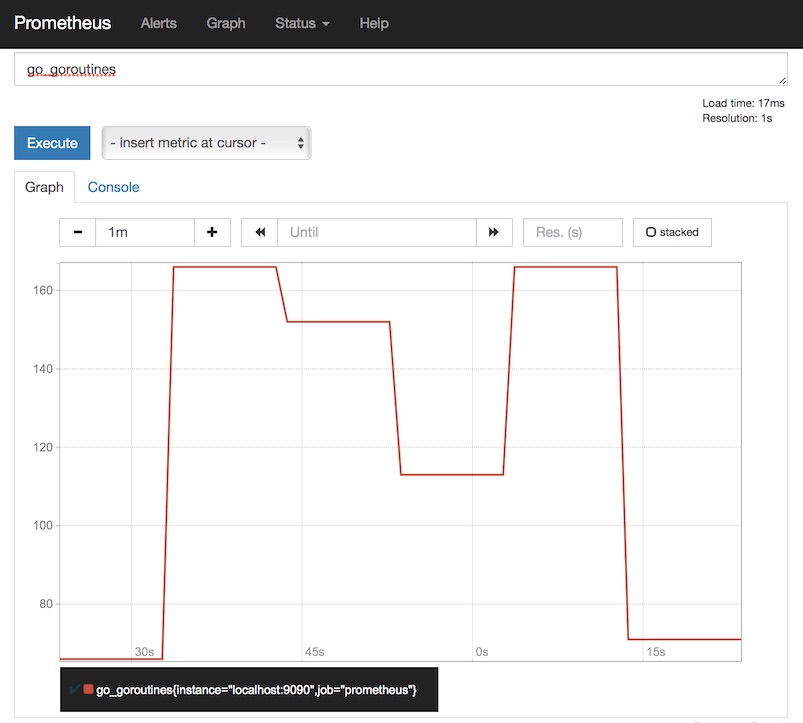 In the screenshot above you can see the amount of go_routines being used as recorded by Prometheus itself. To see the raw metrics Prometheus produces about itself open a browser and head over to http://localhost:9090/metrics

A Go routine is a light-weight version of a thread, they're used in Golang to enable concurrency.

You may not want to monitor Prometheus, but the fact that batteries are included means you can get a feel for metrics from the get go.

So let's look at instrumenting your own application.

There are two approaches to instrumentation, but both involve you exposing or implementing a HTTP/s endpoint. By default the endpoint is /metrics but can be configured in your prometheus.yml file. Prometheus will use this endpoint to scrape metrics at regular intervals such as every 5s or 30s.

Should I alter my application code?

You can make the /metrics endpoint part of your existing application's code. This means you already have the requisite secrets and credentials to interact with the your business/payment or database tiers. The downside is that you need to include a new library, endpoint and dependency into your product or project.

What is the other option?

It is also possible to write a separate process that acts as a shim to expose information from your application or environment. In the case of Ed's Docker Hub exporter he collates data from an external API which he has no control over. So if you're finding it hard to get approval to alter an existing application then this could be the way to go.

An advantage of a separate process is that you can update what you monitor without having to re-deploy your own application(s).

There are two "exposition" formats that Prometheus can scrape from. Let's look at the output of the previous go_routines example by visiting http://localhost:9090/metrics

Use a client library

There are several libraries available for exposing metrics most of which can output text or the more efficient binary format (Protobuf) mentioned above.

The Golang, Java, Python and Ruby language bindings are maintained by the project, but many other open-source bindings are available too. Find a full list here:

Is it worth rolling your own?

The plain-text format is so simple that you can easily implement the protocol by following the Prometheus exposition formats. Before you roll your own make sure that you really can't make use of the tried and tested client libraries.

Let's create a simple application and instrument it directly with the Golang Prometheus library.

We've been asked to write a web-service to provide SHA-256 hashes on demand, we want to know several things:

Fortunately we can achieve all of the above through the use of a Histogram metric, but the easiest example is the counter (always goes up or stays the same) of gauge (like a counter, but can go up or down).

Read up on Metric Types

The complete code including a Dockerfile is available on Github: alexellis/hash-browns

Here's a sample of the "server.go" file:

Here we register our application route and the metrics route.

Then recording time taken is simply a case of calling histogram.Observe(seconds).

This will now show up if we curl localhost:8080/metrics .

The final step is to edit your prometheus.yml file and start scraping the new application code. You will then find the metric in the list on the drop-down and can plot the values.

Putting it all together

We need to edit the Prometheus config, here's a trick to extract the default config from the official Docker image:

Now edit the prometheus.yml file created in your current directory. In the scrape_configs section add the following:

Docker Swarm enables services to reach each other through embedded DNS, so the target is just the label ("hashbrowns") from the compose file.

Note: Addressing the service by name will function well as long as you have only one replica, if you decide to scale the service then you will need to look into more letting Prometheus discover all the replicas separately.

Here's what it will look like in the Prometheus UI: 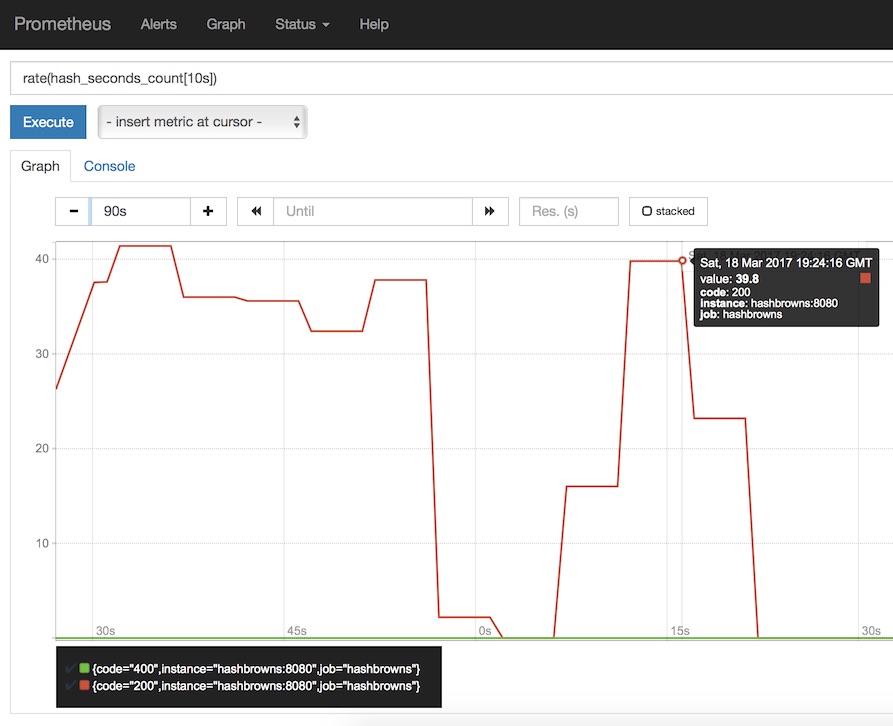 Let's now give answers in PromQL format for the metrics we wanted to collect above. It took me some time to get used to PromQL, but fortunately Julius has written a very detailed article available here.

The following PromQL statement gives the rate of increase for our hash function over a 1 minute window. This window can be smaller, but it needs to cover at least the two samples.

For the average execution over the last 5 minutes type in:

Special thanks to Julius Volz for proof-reading and making suggestions for edits.

Wrapping up, we've gone from no metrics to instrumentation in a very short period of time.

Don't miss the next update, sponsor me on GitHub today.

Fork or star the sample Github repository and start building your own dashboard:

Get hands-on with this @PrometheusIO guide to surface insights from your applications and infrastructure #docker https://t.co/2I0icBIDaC pic.twitter.com/90tZ5VRvbu

Hire me to help you with Kubernetes / Prometheus / Cloud Native

Hire me via OpenFaaS Ltd by emailing sales@openfaas.com, or through my work calendar.

Yes, I have a Docker image (alexellis2/prometheus-armhf:1.5.2) available on the Docker Hub for Prometheus and the AlertManager (alexellis2/alertmanager-armhf:0.5.1) project.

Docker has been celebrating its 4th birthday all over the world with meet-up groups having parties, birthday cakes, stickers…

In this post we'll look at options for scheduling a one-shot container on Docker Swarm. We'll look at some…