Kubernetes is an open-source container orchestration framework which was built upon the learnings of Google. It enables you to run applications using containers in a production ready-cluster. Kubernetes has many moving parts and there are countless ways to configure its pieces - from the various system components, network transport drivers, CLI utilities not to mention applications and workloads.

Note: this blog post was originally written in 2017 for Kubernetes 1.6 and has been updated in 2020 for Kubernetes >=1.16 and a more secure networking configuration

In this blog post we'll install Kubernetes 1.16 on a bare-metal machine with Ubuntu 18.04 in about 10 minutes. At the end you'll be able to start learning how to interact with Kubernetes via its CLI kubectl.

Above: Kubernetes Components by Julia Evans

I suggest using Equinix Metal (aka Packet) for running through this tutorial which will offer you raw and unadulterated access to bare-metal hosts. You can also run through this on a VM or your own PC if you're running Ubuntu 18.04 as your OS.

Head over to your Equinix Metal dashboard and create a new project.

I want to see the power and speed of what bare metal can offer so I'm going for the c1.small.x86 which offers 4x Xeon cores @ 3.5 GHz and 32GB RAM per host. There's also a 120GB SSD which we can use for the OS and for any container images we'll need.

The cheapest host is the t1.small.x86 which comes in at around $0.07/hour and offers 4x Atom cores and 8GB RAM. You can view the pricing plans here.

The hosts will take a few minutes to bootstrap, after which you should log into each via ssh and begin installing the same set of packages for Docker and Kubernetes. containerd is now available as an alternative runtime, but is slightly more work to configure.

A known / tested version of Docker must be used with the kubeadm bootstrapper, otherwise we'll potentially encounter unknown behaviours. The apt package repository contains a sufficiently old version for us.

This command from the Kubernetes documentation adds the package repository where kubeadm, kubectl and the related packages are published on a regular basis.

The kubelet is responsible for scheduling, managing and running containers on your hosts. kubeadm tool is a production-ready convenience utility used to configure the various components that make up a working cluster. The kubernetes-cni package represents the networking components which are not built into Kubernetes directly.

CNI stands for Container Networking Interface which is a spec that defines how network drivers should interact with Kubernetes. CNI network driver processes run using UNIX pipes and are forked for each request.

We need to put the Kubernetes packages on hold because if we do not, when a newer version is released and we run apt-get upgrade, we could end-up with an unexpected bump in our Kubernetes version.

The Kubernetes maintainers decided that the use of swap memory can lead to unpredictable behaviours and preferred to turn it off, than to contend with any of the side-effects that may come up.

You can check if you have swap enabled by typing in cat /proc/swaps. If you have a swap file or partition enabled then turn it off with swapoff. You can make this permanent by commenting out the swap file in /etc/fstab.

At this point you should have run the above steps on each of your nodes. These are all common steps.

You only need to run this step on your designated master node, for me that was k8s-bare-metal-1.

kubeadm aims to create a secure cluster out of the box via mechanisms such as RBAC.

Whilst container orchestrators like Docker Swarm were monolithic and distributed as a single binary, Kubernetes takes a modular and extensible approach. Networking is added only after creating the initial cluster and it's up to the user to pick from one of the dozen networking drivers available.

We will be using Weave net today from Weaveworks. Weave net is easy to install and performs very strongly in benchmarking against similar drivers and can offer features like password-protection and link encryption.

Equinix Metal provides two networks for its machines - the first is a datacenter link which goes between your hosts in a specific region and project and the second faces the public Internet. There is no default firewall - if you want to lock things down you'll have to configure iptables or ufw rules manually.

You can find your private/datacenter IP address through ifconfig:

We'll now use the internal IP address to broadcast the Kubernetes API - rather than the Internet-facing address.

You must replace --apiserver-advertise-address with the IP of your master node host.

You'll get output like this if everything went to plan, if not, then check the steps above.

Equinix Metal's Ubuntu installation ships without an unprivileged user-account, so let's add one.

You can now configure your environment with the instructions at the end of the init message above.

Switch into the new user account and configure the KUBECONFIG

Now try out the KUBECONFIG file:

Try a kubectl command to see if the master node is now listed, note it will be in a NotReady status for the time being

We will now apply configuration to the cluster using kubectl and our new KUBECONFIG file. This will enable networking and our master node will become Ready, at that point we'll move onto the other worker hosts.

Since we are using the default Pod network for host networking, we need to use a different private subnet for Weave net to avoid conflicts. Fortunately the 192.168.0.0/24 space is available for use.

Kubernetes aims to be a highly available clustering container orchestrator where workloads are spread out over multiple hosts with redundancy. We can however force a single master node to run workloads for development by removing its "taint":

This is only recommended if you are running with a single host, do not run this step if you are adding other hosts into the cluster.

Join the other hosts

When we ran kubeadm init on the master node, it outputted a token which is valid for 24-hours. We now need to use that to join other hosts.

If you receive an error at this point, it's likely because you forgot a step above. Rememebr that you need to turn off swap memory for every host, not just the master.

Perform the join step on every host.

Move back to the ssh session for the master node where you are logged in as the k8s unprivileged user.

You should see all your nodes in the Ready status now.

Many of the Kubernetes components run as containers on your cluster in a hidden namespace called kube-system. You can see whether they are working like this:

As you can see all of the services are in a state of Running which indicates a healthy cluster. If these components are still being downloaded from the Internet they may appear as not started.

You can now run a container on your cluster. Kubernetes organises containers into Pods which share a common IP address, are always scheduled on the same node (host) and can share storage volumes.

First check you have no pods (containers) running with:

I wrote a sample application to show developers how to package a Node.js and Express.js microservice. It's called alexellis/expressjs-k8s and you can star or fork it on GitHub.

Let's install it using its helm chart which uses the new Helm 3 release. Helm is used to package Kubernetes manifest YAML files. These YAML files offer a way of packaging an application using a declarative approach.

If you're using MacOS or Linux simply run the below:

If you're a Windows user, then install Git Bash and then run the above in a new terminal.

As of Helm 3, each project manages its own repository for charts published either to S3 or GitHub Pages. Let's add the repo for expressjs-k8s and then perform a sync.

You can now view the events from the Kubernetes API and see the container image for the microservice being pulled in from the Internet and scheduled on one of the nodes.

The helm chart outputs some information on how to access the service:

Run the port-forward command and then access the service via curl:

You can find out which node the Pod is running on like this:

If you like, you can scale the amount of Pods available, at this point, running the previous command should spread the pods across the two worker nodes that I created.

Now we have high-availability for our microservice:

The Kubernetes dashboard offers a visual representation of the resources in the cluster and it can be accessed from your local computer too.

When we initialized the clsuter earlier we chose to advertise only on the local network, so we'll need to connect over ssh with port-forwarding to view the dashboard after deploying it.

Reconnect to the master with a tunnel to our local computer:

Since the dashboard shows us resources across our whole cluster, we will need to create an admin account for it.

Now we need to find token we can use to log in. Execute following command:

Now copy the token and paste it into Enter token field on login screen.

The dashboard can show objects in any namespace, but starts off by presenting the default namepsace where we deployed our microservice earlier using helm.

Here are the two replicas of the Node.js microservice running on our two worker nodes:

And here we can see our three nodes in the cluster: 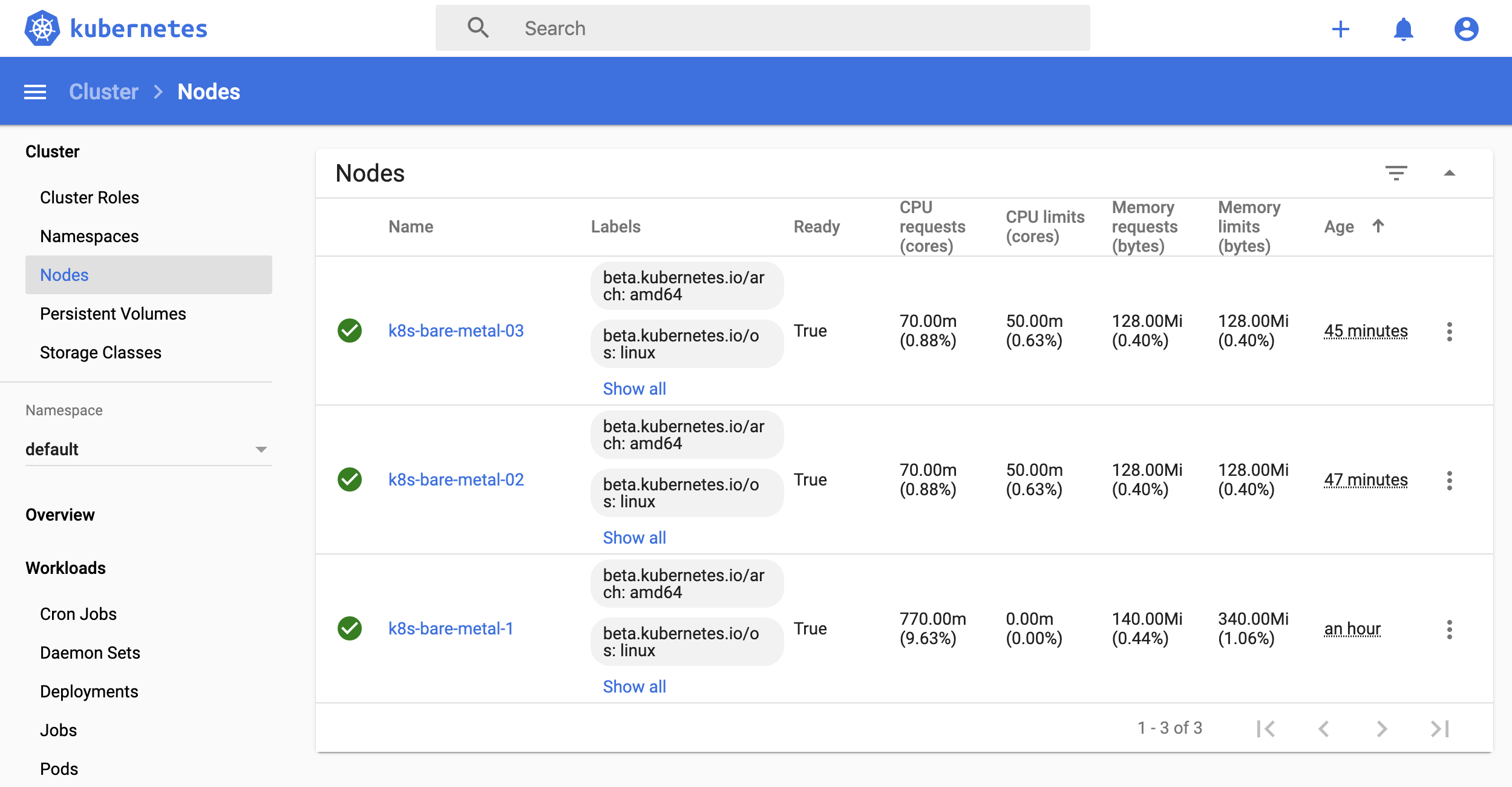 Find out more on GitHub: kubernetes/dashboard.

For alternatives to the Kubernetes dashboard see also:

You've now created a Kubernetes cluster and run your first microservice in Node.js using helm. From here you can start to learn all the components that make up a cluster and explore tutorials using the kubectl CLI.

Hire me to help you with Cloud Native

Email me at alex@openfaas.com to see if I can help you with a project.

Thanks to @mhausenblas, @kubernetesonarm, and Bryan Boreham for feedback on the post and for sharing their tips on setting up a Kubernetes cluster.

I headed to the West Midlands in the UK for my first visit to the Fusion meet-up group. I…