I am a huge fan of Jenkins for Continuous Integration (CI) and the other uses people have found for it as a task/batch file runner and cron substitute. It has a wide range of community-supported plugins which also cater for .NET and Node.js (my main software stacks) making it a great choice at work and at home.

I promote the use of Jenkins for internal projects at work and have helped several teams move from occasional manual builds to full CI. So I wanted to share some first impressions of the recent release by the Jenkins team.

When Jenkins 2.0 was released I wanted to take it for a test drive, the perfect way to do this was through Docker. Docker means zero commitment to installing packages and configuring your system. Even installing Java could take you on a 30-60min hour detour, Official prebuilt images in the Docker Hub completely eliminates that latency and gives you near instant access to pre-packaged software from the vendor.

I started off by looking at the official instructions for starting a Jenkins 2.0 container. They give 3-4 variations of the docker run command but this can be made much simpler through the use of Docker Compose and a docker-compose.yml file. Here's my initial version:

The following docker run command-line may appear short, but docker-compose up is even shorter and easier to remember. Docker Compose can also automate creation of virtual networks, ports and volumes for persistence.

All the post's resources can be found on Github: alexellis/jenkins2-docker

The initial start-up of the Jenkins 2.0 container took 18 seconds to load on my Intel NUC Core i5 running on bare metal with Arch Linux and the latest version of Docker. Starting jenkins:1.565.3 took 22 seconds, which is a negligible difference.

When using docker-compose start and stop Jenkins will shutdown in less than a second and re-start within 7 seconds and your changes are persisted as long as you do not delete the container. When you want your changes to live on longer than this then look into Docker volumes.

What about image size?

There has been about a 50mb increase in size, but the JDK has also been upgraded to version 8.

You can find this information through docker history --no-trunc jenkins:2.0 or by viewing the Dockerfile in the official repository.

Connecting to the dashboard

If you've used Jenkins before, such as in the 1.5 release you would run the container and immediately start using it from a web browser. That process has changed and you are now presented with a password protected login screen and user registration. I can understand that there was concern about unprotected Jenkins instances, but a forced password/registration feels like it could get in the way of automation.

From the perspective of using Docker or docker-compose the best way to find out the initial password is by watching the Jenkins logs as the instance starts up. There may be work-arounds to find the password, but I think it will make automating Jenkins instances harder than with 1.5. Previously you could start a Jenkins container and immediately start interacting with it from any machine with network access.

Use docker exec to run the cat command and retrieve the password.

Now that the password has been accepted you will see a plugins screen, you can either install recommended plugins or pick and choose. The default plug-in list with 1.5 did not include git, msbuild or Team Foundation Server so it was always the first thing I needed to install. Git is now part of the default configuration and now that the plug-ins are installed on-boot they are always up to date. It feels like Jenkins has listened to its users with the new workflow. 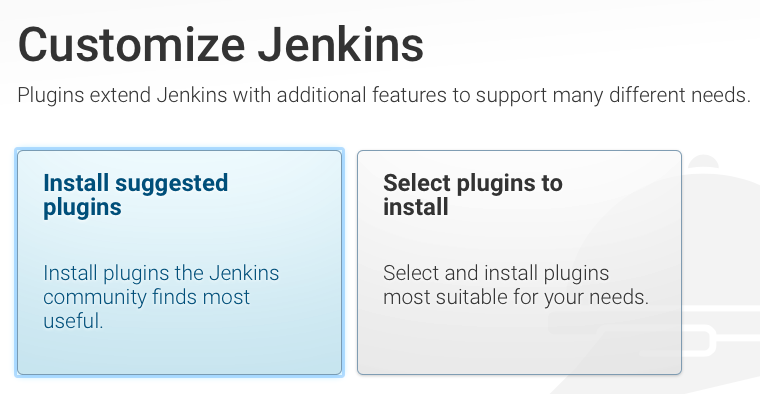 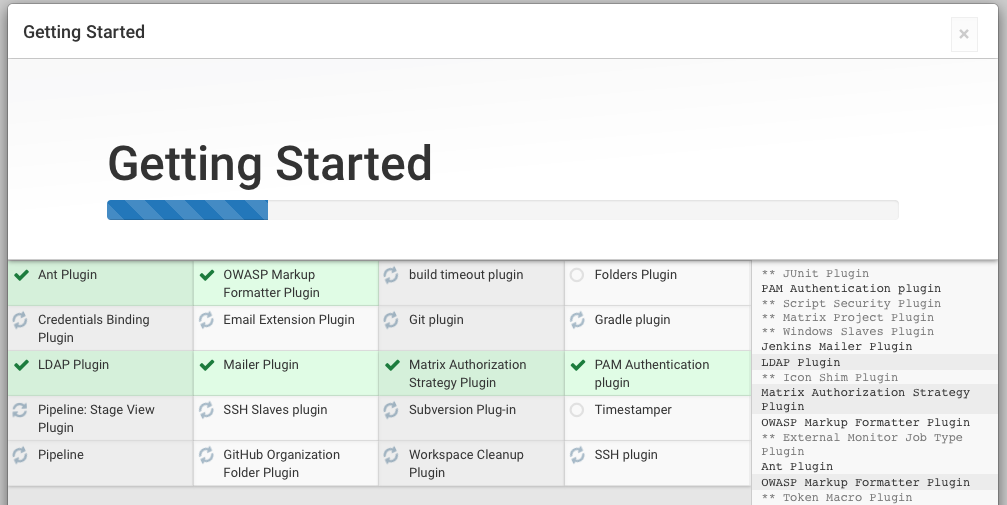 I didn't see an opportunity to enter a HTTP/S proxy, so if you work for a corporation with a HTTP proxy, you will need to close the plugin wizard and navigate to Manage > Manage Plugins > Advanced. Here you can define the proxy and start adding plugins. An alternative may be to introduce a HTTP_PROXY environmental variable through the docker-compose file.

Update from @danielbeck at CloudBees: proxy configuration appears if no connection is detected. To bypass the plugin wizard pass -Djenkins.install.runSetupWizard=false as an argument to Java.

Connect from another machine, and you will need a password

Setting up a build

I wanted a build or (job) for my tutorial Unit testing Express.js with Sinon. Here is the first problem: we don't have Node.js on the Docker master image.

This feels like the right option from a Single Responsibility (SRP) point of view. As a bonus we can configure the containers to talk to each other through docker-compose and a virtual network.

The only requirements for a Jenkins slave image is to have both Java and SSH installed. I have used evarga/jenkins-slave in the past but this is quite heavy-weight at 610mb - with Alpine Linux we can reduce that down to 154.6mb.

Take a look at the Dockerfile for the Jenkins slave below:

It includes Node 4.x LTS, but you could modify the Dockerfile and add something else like Ruby, Python or Node 6.0. if you are evaluating bleeding-edge features.

I have also updated the previous docker-compose file to bring up the slave at the same time as the master:

The networking feature of Docker Compose allows us to reference the slave from the master by port 22 and the name node_ci. The hosts file will be updated automatically meaning we don't have to hard-code IP addresses. 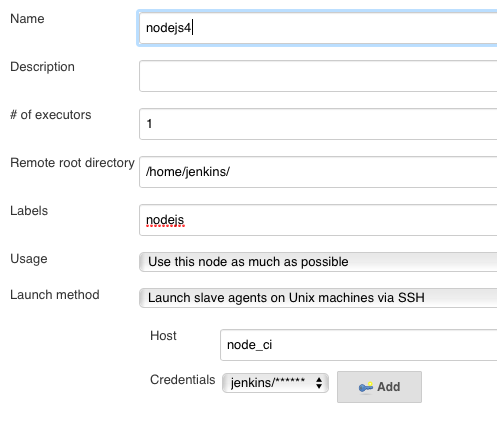 Now the slave is connected we can create a new job to build the Node.js application.

Here's how to set up the job:

For builds producing compiled/transpiled output, I would suggest using the Archive Artifacts plug-in. 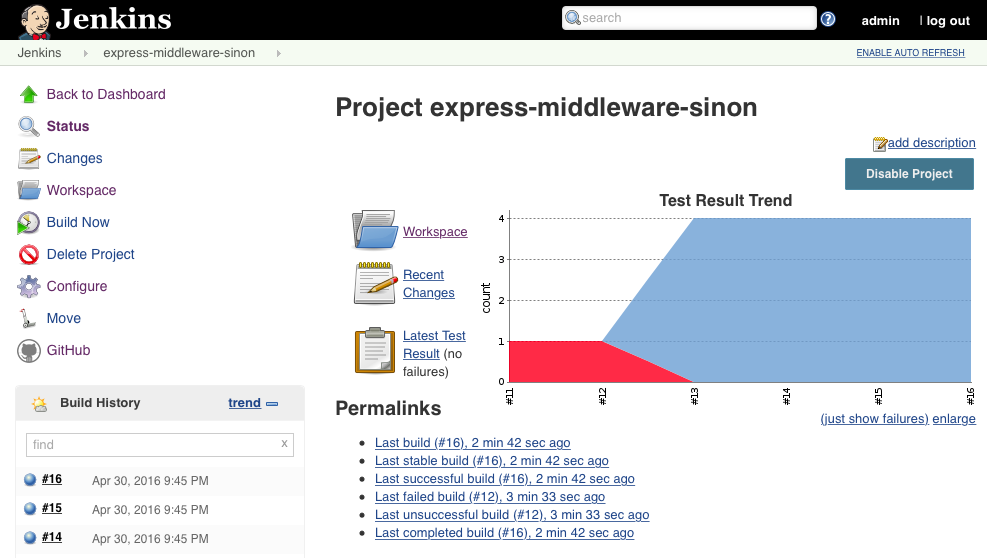 Jenkins stores each job's configuration in a config.xml file. A quick way to download the configuration from the container is with this command:

You can re-create builds at a later date with the saved XML config file. I've exported the job for the example project and placed it in the article's Github repository.

Once I got past the new plugin workflow and additional security I found that setting up my build, configuring my favorite plugins and a Linux slave felt exactly the same as before. There were no unexpected failures or broken plugins for my Git and Node.js workflow. I still need to test out the Team Foundation Server and MSBuild plugins, but I'd be happy to recommend this new version to both my colleagues and readers.

The Jenkins team have added many more features than I can mention in this write-up including Pipeline as Code which looks like it's going to be big. If you want to know more I've included a link to their wiki below.

Star the Github repository to keep track of:

Could you use some help with a difficult problem, an external view on a new idea or project? Perhaps you would like to build a technology proof of concept before investing more? Get in touch via sales@openfaas.com or book a session with me on calendly.com/alexellis.

This blog is hosted on a Raspberry PI for free using Ghost blogging platform, start your own blog through Docker in 5 minutes.

Like many other people in tech, I drink a lot of coffee and spend far more than I should…

Ghost blog on Docker in 5 mins

Pair Docker and Ghost for the perfect platform to run your blog! Read on, to get up and running…