Since this article was published Docker and Swarm have gone through some changes meaning not all of the steps below will be accurate.

Please see my Github Repo for the latest build scripts and outline of instructions: docker-arm repo. 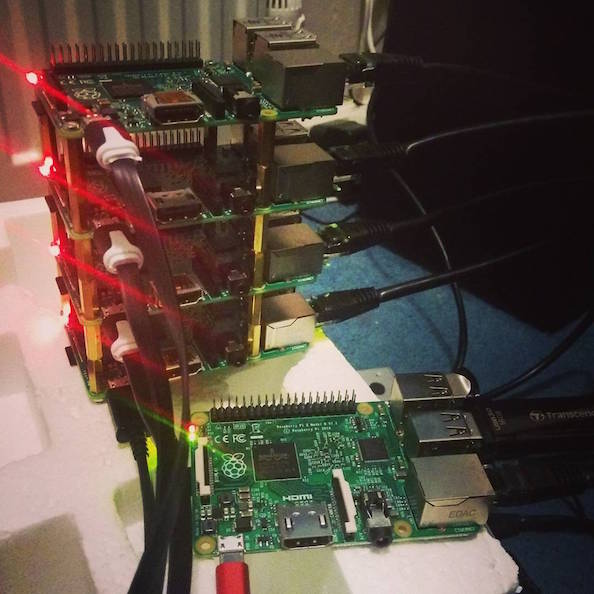 I have connected power to each Raspberry PI 2 board through a 6xUSB charger plug that can supply 2A per device. The network connections are going into an 8 port switch that is then plugged into my main switch.

I used Arch Linux as the host operating system and configured a single PI with Docker and a static IP address. I then used tar to back up root filesystem and decompress it on to all the other SD cards, just changing the static IP address and hostname before booting them up.

As long as the kernel is built with container support and is a late enough release then Docker will install trouble-free on an ARMv7 device such as a Raspberry PI. The problems appear as soon as you pull an image down from the Docker Hub built for a 'standard PC' in x86_64 format and try to run it, you'll get output like this:

The error System error: exec format error is telling us that the binary in the swarm image was built for a different platform and architecture. We need to build the swarm binary from source so that the compiler can re-write all the instructions appropriately.
Alternatively, we can download a binary file that someone else has built and published online. Exercise caution here, if the source is not trusted.

The following steps were tested on Arch Linux ARM, which is a minimal rolling release of GNU/Linux. You could do the same with Ubuntu/Raspbian/Debian.

At this point all the commands on the docker tutorial can be followed to the letter replacing the image name swarm with arm-swarm wherever you see it.

Build the image and tag it:

Once you have the image built, you can export it with docker save and import the .tgz with docker load on your other PIs or just copy the Dockerfile and swarm binary and build it on each PI.

The first step is to create a swarm cluster token, run the image with the parameter create this outputs a key/ID for your PIs to use.

Run the manage command on one of the PIs, or on your laptop. It is important that all machines in the cluster are using the same binary version of the docker client and docker engine

By default the token:// discovery method will connect to the internet and ask docker's online hub for any nodes reporting the same token.

Once the nodes have started it will take 10-20 seconds for them to register at the docker hub and this data will be pulled by your PI running the swarm manage command.

Use the IP address of the manage node and the port on left hand side of our command (the host port).

The swarm can be tasked in the same way a single docker would be. docker ps/run/build all work in much the same way.

Try running docker info, when I ran this on my 5x Raspberry PI 2 cluster it reported 20CPUs and 5GB of RAM.

I have found that the build command will target a random node, and once the image is built I manually have to copy it from node to node or upload it to a Hub/registry and pull it down to each node. See also: docker save/load.

Architecture of images in the hub

Just as the above swarm image failed to work due to an 'exec' error, any other image built for x86_64 will fail in the same way. So when you find an interesting Dockerfile you want to try then you will have to alter the FROM statement and replace Ubuntu/Debian etc with an ARMv7 equivalent image.

All the ARMv7 images are built by enthusiasts and none are currently official meaning: think twice before trusting them. It goes without saying that if they contain malware, then they could wreak havoc on your system.

You will probably have to build your own base image using scripts provided by main Linux distributions for the Raspberry PI. Arch Linux and Debian provide reliable methods for this. If you are lucky, the enthusiast images will also share the scripts needed to rebuild their image from scratch.

Discovery using token:// means each of your nodes and your manage node is constantly sending data about your network and internal IP addresses to docker hub. This is probably not a good idea for a production system. Look into other methods such as using etcd or consul. See the docker.com website.

The commands I have provided are taken from the docker.com development swarm article. By default TLS is not enabled so connections are not secure and could be eavesdropped. Make sure you run this on a private/trusted network and when ready look into securing the docker daemon with TLS.

As far as networks go, the Internet itself is definitely not a safe one. We are under constant threat…

Installing from PPAs behind a proxy

Scenario: You are building a Dockerfile or trying to run apt-get at work, but the network policy is blocking…